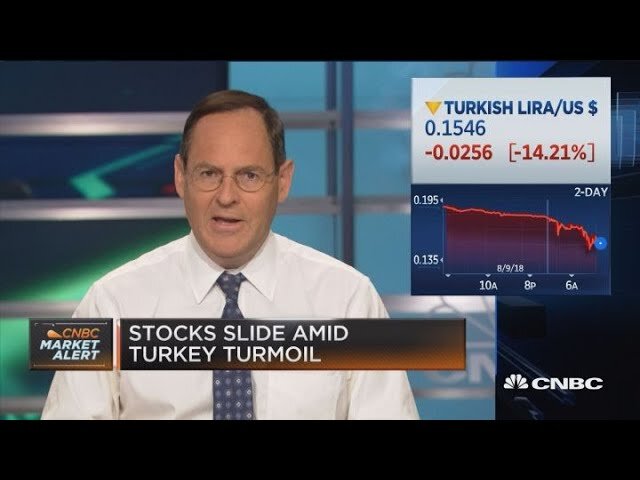 When the dollar rate increase in value, though, all this runs in reverse, effectively tightening global financial conditions, particularly in emerging markets.  The current situation in turkey created a situation called “The hike of King Dollar amid Turkish Pandemonium”

Catastrophic events took place last week in the money souks of the Bosphorus. The Turkish lira plunged 14 per cent against the US dollar on Friday alone. The shock waves of the Turkish lira’s free fall led to panic selling in emerging market currencies and the euro. The financial markets have lost all confidence in President Recep Tayyip Erdogan and his son-in-law/Finance Minister.

Erdogan has ruled out an IMF bailout and opposes central bank rate hikes even though the inflation rate is 16 per cent. Even though the Turkish lira is has lost 40 per cent in 2018, I am not tempted to bottom fish as tensions with Washington escalate and systemic risk in Turkish banking soars.

As a feared, US dollar short term rates have begun to rise, as the rise in Libor and even Eibor in the past few months attests. There have been seven rate hikes by the FOMC since the US central bank began its tightening cycle in December 2015. In addition, the Federal Reserve has shrunk its balance sheet by $300 billion to $4.2 trillion. By year end, the Fed Funds rate target will be 2.25-2.50 per cent. The Fed’s balance sheet will shrink by a cumulative $750 billion in 2018 and 2019.

This will happen at the same times as Uncle Sam goes on a borrowing spree via US Treasury bill issuance. Three month Libor, the bellwether interest rate for global finance, is now 2.3 per cent, the anchor behind King Dollar. I can easily envisage three-month Libor at least a 150 basis points higher or almost four per cent next summer. This will have a seismic, even traumatic impact on financial markets.

For instance, a collapse of the US and UK commercial real estate market is now possible and I expect a wave of corporate defaults/bank failures in leveraged emerging market economics. Turkey is just the tip of the iceberg. A world addicted to reckless borrowing and colossal debt loads will now learn to pay the price of its leveraged greed as a rising Libor spawns the next credit crunch. This is a replay of 2008 and King Dollar will be the only real refuge/safe haven currency on the planet though the Japanese yen could again surge to 100.

The fall in the euro to 1.14 is a testament to the monetary divergence between the Federal Reserve and the ECB. US economic growth has also surged while German GDP growth has disappointed relative to expectations. Political risk in Italy and an Élysée Palace scandal has also led to weakness in the euro even though Mario Draghi has tried to talk money market rates higher.

Industrial production data from Spain, the highest GDP growth, major economy in the eurozone, was a disappointment. Unless the euro convincingly scales its 50 day moving at 1.1670, the strategic default trade de jour is to remain short the single currency against King of King Dollar, heir to Darius, Cyrus and Xerxes.

The short term reaction to the diplomatic spat between Saudi Arabia and Canada is to short the loonie at 1.30 for a 1.33 target. It is significant that the Canadian dollar is also underperforming most G10 currencies after Tuesday’s classic bearish reversal. Saudi pension fund selling of Canadian dollar bonds will exacerbate loonie weakness amid illiquid August trading.

However, I believe the downside risk to the Canadian dollar will be limited due to stronger than consensus economic data momentum, geopolitical/supply risk in a light crude oil market and money market expectations of a 25 basis point Bank of Canada rate hikes this autumn. This means that the loonie remains a “buy on dips” strategy as the scale of Saudi-Canada trade is too small to warrant any permanent damage to Canada’s balance of payments. Risk reversals in the foreign exchange option market do not really indicate any real demand for loonie weakness protection.

Sterling’s fall below 1.28 is due to speculation that Britain is heading for Brexit without a trade deal with the EU. This is the reason sterling has also slumped to 10 month lows against the euro. The risk of a no-deal Brexit, estimated at 60 per cent by Trade Secretary Liam Fox, leaves sterling vulnerable to further selling in the months ahead, particularly if UK economic data momentum stalls.

Chicago futures positioning data indicate that both leveraged funds and real money accounts have increased short cable bets. In this milieu, I can easily envisage 1.25 as a strategic target and ING Bank estimates the euro-sterling rate that reflects no deal Brexit risk as 0.92.