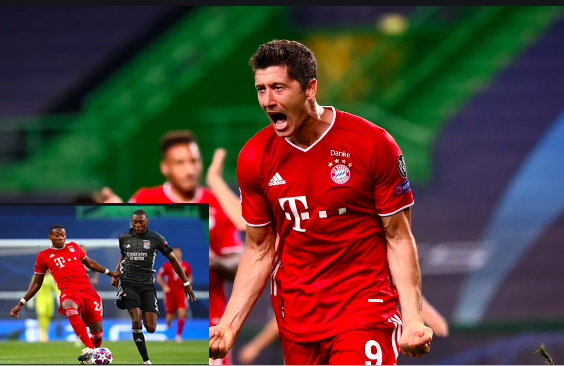 Bayern Munich Defeated Lyon in the Champions League Final and Will Face P.S.G.

After the 3:0 victory over Olympique Lyon, Bayern Munich has reached the final of the Champions League. On Sunday they will meet Paris Saint-Germain for the sixth time to win the competition and achieve the second triple in the club’s history. Alphonso Davies is now the first Canadian international to reach the final of the game.

“A dream has come true for me,” Davies told B.T. Sport after the game. “To play in the Champions League and make it to the final. It’s everything you could wish for.

It feels good, everyone is happy and playing well. We’re delighted that we made it to the final. These guys have basically won everything, but they are still excited. They’re always hungry to win this one.”

The 19-year-old has experienced a rapid rise since joining Bayern Munich in January 2019. The club signed the Canadian last summer, but FIFA regulations meant that the transfer could only be completed when Davies turned 18 in November.

At home in Vancouver, the Whitecaps are keeping their fingers crossed for Davies to win the cup. The Major League Soccer team will receive a $1.1 million bonus if Davies wins the Champions League with the Bavarians.

For the Bavarians, it would be considered as a payment they could easily afford. In fact, the young Canadian has been considered a rare find.

According to the transfer market, Davies has a value of only 11 million U.S. dollars and is now worth 66 million U.S. dollars. But P.S.G. will offer Davies a significant deal. Even though Davies did a great job against Lionel Messi in the quarter-finals, the Canadian could face an even bigger contest on Sunday when he faces P.S.G.’s Kylian Mbappé.

“We have got a better squad than in 2013 in terms of depth,” Neuer said. “We have class players beyond the 18-man squad. It’s fantastic what a team we have.”

Despite the facts that Bayern Munich will be playing PSG in the finals. Lyon had its moments, if they could have taken one of the two good chances they had in the first half, we could have had a real game in our hands.

But when the Bayern players found their range, they were dominant. Rio Ferdinand says that the difference between the teams was quality before the Bayern Munich team, and that’s how it was.

They took their chances, Lyon didn’t, and that’s it.

The Bayern Munich team are obviously extraordinarily capable and talented, but if you’re PSG, you think there are big questions to ask the Bayern defence. We shall see… …on Sunday! Thank you very much for your company.

A Bayern Munich team that also includes a 19-year-old Canadian who was able to sign the football history books of his native homeland, Canada next Sunday.