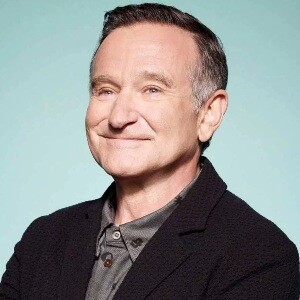 Robin Williams is an american born exceptional Actor and comedian and is very well known for his, improvisational acting in films like ‘Good Will Hunting’ and ‘Dead Poets Society.’

Who Was Robin Williams?

After developing his improvisational style as a stand-up comedian, Robin Williams landed his own television show, Mork and Mindy, and moved into leading parts in film with Robert Altman’s Popeye. He played numerous memorable film roles, both comedic and dramatic, and after three previous nominations he won an Academy Award for best supporting actor in Good Will Hunting. On August 11, 2014, the actor was found dead in his home at the age of 63.

Actor and comedian Robin McLaurin Williams was born on July 21, 1951, in Chicago, Illinois. Eventually becoming one of America’s funniest performers, Williams attended Claremont Men’s College and College of Marin before enrolling at the Juilliard School in New York City. There he befriended and became roommates with fellow actor Christopher Reeve. Williams later experimented with comedy in San Francisco and Los Angeles, developing a successful stand-up act.

Williams had done work on TV programs like The Richard Pryor Show, Laugh-In and Eight Is Enough before becoming more widely known to American audiences as the alien Mork. The character debuted on the series Happy Days before being given his own show, Mork & Mindy. Williams co-starred with Pam Dawber in the zany, endearing sitcom, which debuted in 1978 and ran for four seasons.

Having been part of the cast of the 1977 romp Can I Do It ‘Till I Need Glasses?, Williams made his big-screen debut in a lead role playing the famous spinach-eating sailor in Popeye (1980), directed by Robert Altman and co-starring Shelley Duvall.

A string of successful film roles for Williams followed over the years, showcasing his stellar comedic talents as well as his ability to take on serious work. He played the title character in 1982’s The World According to Garp as well as a Russian musician who defects to America in Moscow on the Hudson (1984). Later, in Good Morning Vietnam (1987), Williams portrayed irreverent radio DJ Adrian Cronauer, while in Dead Poets Society (1989) he played free-thinking teacher John Keating. Both projects earned him Academy Award nods for lead actor.

While his career was taking off, Williams faced many personal challenges. He developed a drug and alcohol problem while working on the sitcom Mork and Mindy, and would struggle with addiction for more than two decades. He also became involved in several tumultuous romantic relationships; while married to actress Valerie Velardi, he was involved with other women. Williams and Velardi ultimately divorced in 1988. The following year, he married his son’s nanny, Marsha Garces.

Despite personal setbacks, Williams continued acting. He appeared in the hit Penny Marshalldrama Awakenings (1990) with Robert De Niro and Julie Kavner, and received his third Oscar nomination for his role as homeless man Parry in the 1991 redemptive drama The Fisher King.

His more adult-oriented films also made waves, including The Birdcage (1996) and Good Will Hunting (1997). His performance as the psychiatrist in the latter project won him an Academy Award as best supporting actor.

For the next few years, Williams took on a range of roles. He starred as the doctor who treated his patients with humor in Patch Adams (1998) and then portrayed a Jewish man in Germany during World War II in Jakob the Liar (1999). Based on a work by Isaac Asimov, Bicentennial Man (1999) gave Williams the opportunity to play an android who develops human emotions. And he returned to voice acting as Dr. Know in A.I.: Artificial Intelligence in 2001.

While best known for his thrilling humor, Robin Williams also explored darker characters and situations on screen. He played a creepy photo developer in One Hour Photo (2002); a writer of pulp novels in Insomnia (2002); and a radio host who gets caught up in the mystery surrounding a troubled fan in The Night Listener (2006).

Williams returned to his comedic talents as well with Man of the Year (2006), a send-up of U.S. presidential politics. Ironically, that same year, he portrayed Teddy Roosevelt in the popular family film Night at the Museum, co-starring Ben Stiller. Williams also appeared in the family comedy RV with Cheryl Hines, Kristin Chenoweth and Jeff Daniels in 2006.

In the summer of 2006, Williams suffered a drug relapse. He admitted himself to a rehabilitation facility for alcoholism treatment that August. The actor quickly rebounded and, in 2007, he starred as a reverend in the comedy License to Wed with Mandy Moore and John Krasinski.

In September 2008, Robin Williams started touring for his one-man stand-up comedy show, Weapons of Self Destruction, focusing on “social and political absurdities.” That same year, he and Garces divorced, citing irreconcilable differences.

Williams poured his energy into his sold-out shows, but health problems would derail the comedian in March of 2009. Several months into his fast-paced tour, Williams began experiencing shortness of breath. The complications led him to cancel performances and he ended up undergoing heart surgery.

While Williams was recovering, the actor was once again seen playing Teddy Roosevelt in Night at the Museum: Battle of the Smithsonian.  In November 2009, he starred alongside John Travolta in the Disney film Old Dogs.

Williams continued working on a number of different projects. He made guest appearances on TV shows like Louie and Wilfred. In March 2011, he appeared on Broadway as part of the original cast of Bengal Tiger at the Baghdad Zoo, with the show running until July.

On the big screen, reprising his roles of Ramon and Lovelace from the 2006 original, he lent his voice to the 2011 animated sequel Happy Feet Two. He and graphic designer Susan Schneider also tied the knot that October.

He co-starred with Sarah Michelle Gellar on the sitcom The Crazy Ones, which debuted in the fall. Set in an advertising firm, the show featured Williams and Gellar as father and daughter. The show was canceled after only one season. Then in 2014, Williams starred as disgruntled Henry Altmann in the film Angriest Man in Brooklyn.

Williams has three children: Zachary (his son with Velardi), Zelda and Cody (his two children with Garces).

On August 11, 2014, the 63-year-old comedian was found dead in his California home. His publicist released this statement: “Robin Williams passed away this morning. He has been battling severe depression of late. This is a tragic and sudden loss. The family respectfully asks for their privacy as they grieve during this very difficult time.”

A press release issued by the Marin Country sheriff’s office on August 12 stated, “The preliminary results of the forensic examination revealed supporting physical signs that Mr. Williams life ended from asphyxia due to hanging.” Additionally, a pocket knife was found at the scene and several cuts were found on Williams’ left wrist. Toxicology tests were administered as part of the autopsy.

The final report was released in November 2014 and revealed no alcohol or illegal drugs had been found in his system. Prescription medications were found, but in “therapeutic concentrations.” The coroner confirmed the results were in line with the preliminary findings.

In a statement issued by Susan Schneider on August 13, she disclosed that her late husband had been diagnosed with Parkinson’s disease which he had not revealed publicly. Parkinson’s disease is a disorder of the nervous system that progresses over time, affecting movement and speech. She also confirmed that the actor was battling depression and anxiety, but that he had maintained his sobriety.

Schneider’s statement also expressed gratitude for the outpouring of support following her husband’s suicide and touched on the legacy he left behind: “Since his passing, all of us who loved Robin have found some solace in the tremendous outpouring of affection and admiration for him from the millions of people whose lives he touched. His greatest legacy, besides his three children, is the joy and happiness he offered to others, particularly to those fighting personal battles.”

In November 2014, reports surfaced that prior to his death Williams was also suffering from Lewy body dementia, a type of progressive dementia often found in people diagnosed with Parkinson’s disease. That same month, the dark comedy A Merry Friggin’ Christmas was released, which starred Williams as part of an ensemble cast that included Joel McHale, Lauren Graham and Candace Bergen, among others. In December of that year, Night at the Museum: Secret of the Tomb, the final film in the series, was released in which Williams reprised his role as Teddy Roosevelt.

In July 2015, Williams’ final film, Boulevard, hit theaters. He played Nolan Mack, a husband in a longtime, loving yet passionless marriage (opposite Kathy Baker). His character has hidden his homosexuality but this changes with an encounter with a young male prostitute. The film showcases Williams’ talent in a role filled with grace and dignity, where quiet moments speak volumes.

Years after his death, Williams’s show business career and final days remained a captivating subject for fans. Dave Itzkoff’s Robin became a best-seller following its May 2018 publication, and two months later, HBO offered a character study of the comedian via footage of stand-up clips and interviews with family and friends in Robin Williams: Come Inside My Mind.

Robin Williams left behind an estate estimated somewhere between $50 and $100 million.