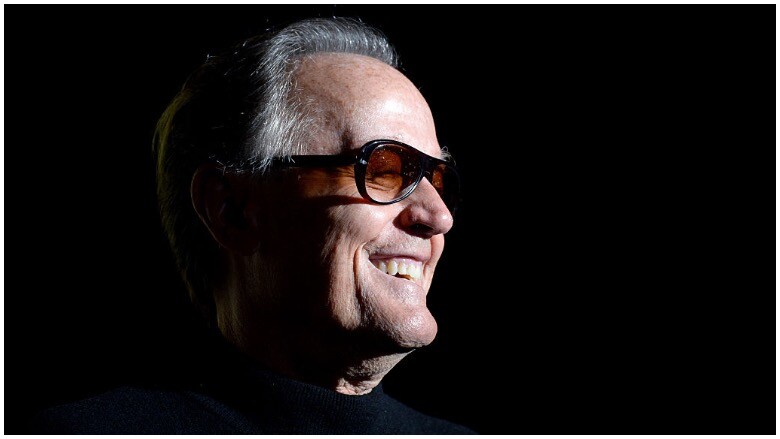 Who is Peter Fonda?

Peter Henry Fonda (February 23, 1940 – August 16, 2019) was an American actor. He was the son of Henry Fonda, younger brother of Jane Fonda, and father of Bridget and Justin Fonda (by first wife, Susan Brewer, stepdaughter of Noah Dietrich). Fonda was a part of the counterculture of the 1960s.
He was nominated for the Academy Award for Best Original Screenplay for Easy Rider (1969), and the Academy Award for Best Actor for Ulee’s Gold (1997). For the latter, he won the Golden Globe Award for Best Actor – Motion Picture Drama. Fonda also won the Golden Globe Award for Best Supporting Actor – Series, Miniseries or Television Film for The Passion of Ayn Rand (1999).
[spacer height=”20px”]

Fonda was born on February 23, 1940, in New York City, the only son of actor Henry Fonda (1905–1982) and his wife Frances Ford Seymour (1908–1950); his sister was actress Jane Fonda (born 1937). He and Jane had a maternal half-sister, Frances de Villers Brokaw (1931–2008), from their mother’s first marriage.
Their mother committed suicide in a mental hospital when Peter, her youngest, was ten, although he did not discover the circumstances or location of her death until he was 15 years old.
[spacer height=”20px”]
On his eleventh birthday, he accidentally shot himself in the abdomen and nearly died. He went to Nainital and stayed for a few months for recovery.[6] Years later, he referred to this incident while with John Lennon and George Harrison while taking LSD. He said, “I know what it’s like to be dead.” This inspired The Beatles’ song “She Said She Said”.
Early on, Fonda studied acting in Omaha, Nebraska, his father’s home town. While attending the University of Nebraska Omaha, Fonda joined the Omaha Community Playhouse, where many actors (including his father and Marlon Brando) began their careers.
Before he attended the University of Nebraska Omaha, Peter attended the Fay School in Southborough, Massachusetts and was a member of the class of 1954. He then matriculated to Westminster School, a Connecticut boarding school in Simsbury where he graduated in 1958.

Fonda performed at the Cecilwood Theatre in New York in 1960.
Fonda found work on Broadway and gained notice in Blood, Sweat and Stanley Poole, written by James and William Goldman, which ran for 84 performances in 1961.
[spacer height=”20px”]

Fonda began guest starring on television shows like Naked City, The New Breed, Wagon Train, and The Defenders.
Fonda’s first film came when producer Ross Hunter was looking for a new male actor to romance Sandra Dee in Tammy and the Doctor (1963). Fonda was cast in the role, in what was a minor hit.
He followed this with a support part in The Victors (1963), a bleak look at American soldiers in World War II, directed by Carl Foreman. Fonda’s performance won him a Golden Globe Award for most promising newcomer.

Replica of the “Captain America” Harley-Davidson chopper that Fonda rode in Easy Rider (1969), on display in a German museum.
In 1968, Fonda produced, co-wrote and starred in Easy Rider, directed by Dennis Hopper. Easy Rider is about two long-haired bikers traveling through the southwestern and southern United States where they encounter intolerance and violence.
[spacer height=”20px”]
Fonda played “Captain America”, a charismatic, laconic man whose motorcycle jacket bore a large American flag across the back. Dennis Hopper played the garrulous “Billy”. Jack Nicholson played George Hanson, an alcoholic civil rights lawyer who rides along with them. Fonda co-wrote the screenplay with Terry Southern and Hopper.

After the success of Easy Rider, both Hopper and Fonda were sought for film projects. Hopper made the drug-addled jungle epic The Last Movie (in which Fonda co-starred along with singer Michelle Phillips of The Mamas and the Papas).
Fonda directed and starred in the 1971 Western film, The Hired Hand. He took the lead role in a cast that also featured Warren Oates, Verna Bloom and Beat Generation poet Michael McClure. The film received mixed reviews and failed commercially upon its initial release, but many years later, in 2001, a fully-restored version was shown at various film festivals, gaining critical praise, and was re-released by the Sundance Channel on DVD that same year.

In 2007, Fonda made a notable return to the big screen as the bounty hunter Byron McElroy in the remake of the 1957 Western, 3:10 to Yuma. He appeared together with Christian Bale and Russell Crowe. The film received two Academy Award nominations, and positive reviews from critics.
He also appeared in the last scenes of the biker comedy Wild Hogs as Damien Blade, founder of the biker gang Del Fuegos and father of Jack, played by Ray Liotta. Fonda also portrayed Mephistopheles, one of two main villains in the 2007 film Ghost Rider. Although he wanted to play the character in the sequel, he was replaced by Ciarán Hinds.
He appeared in Journey to the Center of the Earth (2008), Japan (2008), and The Perfect Age of Rock ‘n’ Roll (2009).
In 2009, he appeared as ‘The Roman’, the main villain, in The Boondock Saints II: All Saints Day, the sequel to the cult hit The Boondock Saints. Fonda also appeared on the TV series Californication.

In 2000, a Golden Palm Star on the Palm Springs, California, Walk of Stars was dedicated to him.

home: Fonda had a permanent home in Paradise Valley, Montana since 1975.

is an estimated $40 million, according to Celebrity Net Worth.

In 2011, Fonda and Tim Robbins produced The Big Fix, a documentary that examined the role of BP in the Deepwater Horizon oil spill and its effects on the Gulf of Mexico. At a press conference at the Cannes Film Festival, Fonda stated that he had written to President Barack Obama about the spill and attacked him as a “fucking traitor” for allowing “foreign boots on our soil telling our military—in this case the Coast Guard—what they can and could not do, and telling us, the citizens of the United States, what we could or could not do.'”

In June 2018, Fonda went on Twitter to criticize President Donald Trump’s administration’s enforcement of U.S. immigration policy by Jeff Sessions, specifically regarding the separation of children from their parents at the Mexican border, writing that “We should rip Barron Trump from the arms of First Lady Melania Trump and put him in a cage with pedophiles.”
He also suggested that Americans should seek out names of U.S. Immigration and Customs Enforcement agents in order to protest outside of their homes and the schools of their children.
[spacer height=”20px”]
The Secret Service opened an investigation based on a report from the Trump family.Former Arkansas Gov.
Mike Huckabee, whose daughter, White House Press Secretary Sarah Huckabee Sanders, was also the object of Fonda’s tweets, believes that Fonda’s statement about Barron Trump is a violation of federal criminal law.Fonda had also suggested “Maybe we should take her (Sanders) children away…”
[spacer height=”20px”]
It was also reported by Politico that Fonda “has been railing against the White House for days”. In another now-deleted tweet, Fonda targeted United States Department of Homeland Security Secretary Kirstjen Nielsen by calling her an uncouth name and calling for Nielsen to be “put her in a cage and poked at by passersby …”
Fonda stated that he deleted his tweet regarding Barron Trump, saying that he “immediately regretted it and sincerely apologize to the family for what I said and any hurt my words have caused.” Popular backlash to Fonda’s tweets resulted in a call for a boycott of his newest film at the time, Boundaries and other Sony projects. Sony Pictures released Boundaries as planned on June 22, 2018,but completely condemned the comments made by Fonda.