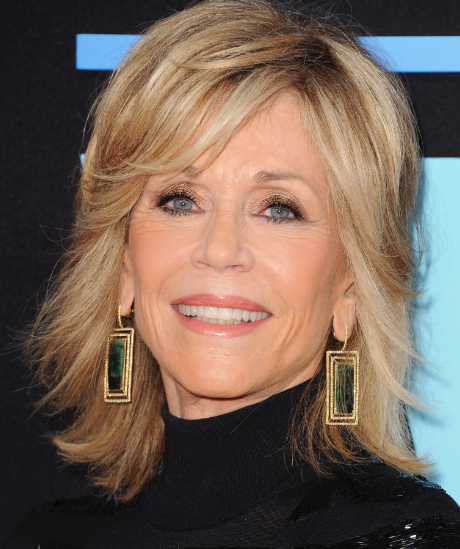 Jane Fonda is an American actress best known for her acting career, political activism and aerobic-exercise videos. The daughter of acclaimed actor Henry Fonda, the actress has won two Oscars.

Who Is Jane Fonda?

Jane Fonda is an American actress born on December 21, 1937, in New York City. The daughter of acclaimed actor Henry Fonda, Jane starred in the acclaimed films Klute and Coming Home, winning Oscars for both. Off screen, she was a civil rights and anti-war activist. In the 1980s, the actress found success launching a series of aerobic-exercise videos. Fonda’s recent projects include The Newsroom, Grace and Frankie and Youth.

Fonda attended the Emma Willard School in Troy, New York, and Vassar College in Poughkeepsie, where she was an undistinguished student. Thereafter, she engaged in a whirlwind of studies in Paris and New York.

Her first stage appearance was in 1954, but she did not seriously decide on an acting career until four years later while visiting her father, who lived next door to Lee Strasberg, director of the Actors Studio in Malibu, California. Friends urged her to go into the profession; Strasberg accepted her as his student, and she paid for her acting lessons with a brief but successful modeling career.

Fonda’s career seemed to really take off in 1960. She made her film debut in Tall Story (1960) with Anthony Perkins. On Broadway, Fonda netted a Tony Award nomination for There Was a Little Girl. She continued to juggle theatrical and film work over the next few years. Working with director George Cukor, Fonda starred in the romantic comedy The Chapman Report (1962). She shared the Broadway stage with Celeste Holm in Invitation to a March and Dyan Cannon in The Fun Couple around this time.

In the late 1960s, Fonda recreated herself as a type of sex kitten under the direction of her French filmmaker husband Roger Vadim. This new look was most evident in the 1968 science fiction tale Barbarella.

On the big screen, Fonda continued to deliver strong performances. She starred as playwright Lillian Hellman in Julia (1977) with Vanessa Redgrave. The following year, Fonda won her second Academy Award for the Vietnam War drama Coming Home with Jon Voight. She also starred in the hit thriller The China Syndrome (1979) with Jack Lemmon and Michael Douglas around this time.

Another significant role for Fonda came a few years later. She co-starred with her father Henry in On Golden Pond (1982). The film explores the dynamics of a family during a visit to their summer home. Art mirrored life in this case, with Fonda playing daughter to her real-life father. Katharine Hepburn also starred as Fonda’s mother. The film gave her father his first and only Academy Award win as Best Actor.

Around this time, Fonda also found herself spearheading a national health craze. She launched an immensely successful series of aerobic-exercise videos.

In 2005 Fonda made a dramatic return to the public eye. She appeared in her first film in almost 15 years with Monster-in-Law, which also starred Jennifer Lopez and Michael Vartan. That same year, Fonda published an autobiography, My Life So Far. More film roles followed, including playing the title character in the 2007 film Georgia Rule with Lindsay Lohan.

Working on the small screen, Fonda landed a recurring role on the media-focused dramatic series The Newsroom in 2012. She also played former First Lady Nancy Reagan in the 2013 film The Butler. The following year, Fonda played the matriarch in the family dramatic comedy This Is Where I Leave You with Jason Bateman and Tina Fey.

In 2015 Fonda teamed up with longtime friend Lily Tomlin for the series Grace and Frankie. The show looks at two women who work to rebuild their lives after their husbands fall in love with each other and leave them. Martin Sheen plays Fonda’s husband, Robert, and Sam Waterston plays Tomlin’s husband, Sol. That year Fonda also delivered a standout performance alongside Michael Caine and Harvey Keitel in Youth, earning a Golden Globe nomination for Supporting Actress.

In 2018 Fonda’s colorful life was the subject of HBO’s documentary Jane Fonda in Five Acts.

During the 1960s, Fonda engaged in political activism in support of the Civil Rights Movement, and in opposition to the Vietnam War. Fonda’s visits to France brought her into contact with leftist French intellectuals who were opposed to war, an experience that she later characterized as “small-c communism”. Along with other celebrities, she supported the Alcatraz Island occupation by American Indians in 1969, which was intended to call attention to the failures of the government with regards to treaty rights and the movement for greater Indian sovereignty.

She supported Huey Newton and the Black Panthers in the early 1970s, stating: “Revolution is an act of love; we are the children of revolution, born to be rebels. It runs in our blood.” She called the Black Panthers “our revolutionary vanguard … we must support them with love, money, propaganda and risk.” She has been involved in the feminist movement since the 1970s and dovetails her activism in support of civil rights.

In 2015, Fonda expressed disapproval of President Barack Obama’s permitting of Arctic drilling (Petroleum exploration in the Arctic) at the Sundance Film Festival. In July, she marched in a Toronto protest called the “March for Jobs, Justice, and Climate”, which was organized by dozens of nonprofits, labor unions, and environmental activists, including Canadian author Naomi Klein. The march aimed to show businesses and politicians alike that climate change is inherently linked to issues that may seem unrelated.

In addition to issues of Civil Rights, Fonda has been an opponent of oil developments and their adverse effects on the environment. In 2017, while on a trip with Greenpeace to protest oil developments, Fonda criticized Canadian Prime Minister Justin Trudeau saying at the summit on climate change in Paris, known as the Paris agreement, Trudeau “talked so beautifully of needing to meet the requirements of the climate treaty and to respect and hold to the treaties with indigenous people…and yet he has betrayed every one of the things he committed to in Paris.”

“When you can’t remember why you’re hurt, that’s when you’re healed.”

“A good many dramatic situations begin with screaming.”

“We cannot always control our thoughts, but we can control our words, and repetition impresses the subconscious, and we are then master of the situation.”

“If the career you have chosen has some unexpected inconvenience, console yourself by reflecting that no career is without them.”

“To be a revolutionary you have to be a human being. You have to care about people who have no power.”

“A man has every season while a woman only has the right to spring.”

“I don’t think there’s anything more important than making peace before it’s too late. And it almost always falls to the child to try to move toward the parent.”

“My mother killed herself when I was 12. I won’t complete that relationship. But I can try to understand her.”

Fonda has been married three times — all of these unions ended in divorce. Her marriage to filmmaker Roger Vadim lasted from 1965 to 1973, and they had a daughter named Vanessa together. Then she married activist and politician Tom Hayden in 1973.

They welcomed their son Troy Garity that same year. When Troy was a teenager, Fonda also unofficially adopted a young African-American girl named Mary Williams. Williams later wrote about her life with Fonda in the 2013 memoir The Lost Daughter.

After divorcing Hayden in 1990, Fonda soon found love with media mogul Ted Turner. Married in 1991, the pair stayed together for a decade. The couple divorced in 2001, reportedly over Fonda’s newfound Christian faith. These days Fonda has been dating music producer Richard Perry.

Born Lady Jayne Seymour Fonda on December 21, 1937, in New York City, Jane Fonda has enjoyed a tremendous career as an actress. She comes from a Hollywood dynasty of sorts. Her father Henry was one of the top actors of the 20th century. Her brother Peter and her niece Bridget have also had their share of success on the big screen.

Fonda faced some challenges growing up. Her father could be cold and distant. Her mother, socialite Frances Seymour Brokaw, committed suicide when Fonda was 12 years old. Not long after her mother’s death, Fonda developed an eating disorder, which she struggled with for years. She attended boarding school and then went to Vassar College. Leaving college, Fonda went to Paris to study art.

Fonda returned to New York and did a bit of modeling for a time. Before long, she decided to follow in her father’s footsteps. In 1954 she co-starred with her father, Henry Fonda, in a production of The Country Girl. Fonda began to study her craft with Lee Strasberg at the famed Actors Studio a few years later.