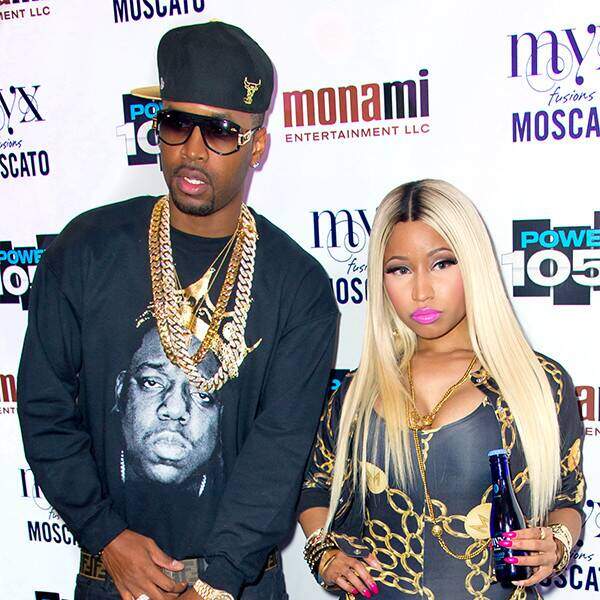 Nicki Minaj and her former boyfriend got into a heated Twitter feud as he accused her of assault during their 12-year relationship.

Following Minaj’s radio interview with Hot 97, during which she addressed her ex Safaree Samuels, he made claims about a physical altercation that took place before they broke up in 2014.

“Remember the night you cut me and I almost died the police and ambulance had to take me out the crib on a stretcher,” tweeted Samuels, who stars in VH1’s franchise Love & Hip Hop. “I had to lie and tell them I was trying to kill myself so they wouldn’t take you to jail. When things like that start happening more Than once it’s time to dip.”

“U stole my card & told me you thought it was an account with ‘free money’ that I didn’t know about. On God. God will strike you down & more for lying. Ha! Stop saying u packed & left! On Jesus u came to my house CRYING BEGGING to go w/me to Europe to the EMA’s. I said NO DUMMY,” she wrote.

Then Samuels fired back, denying that he “use” her credit card.

“We know each other inside out. Everything there was for us. I didn’t use your card for prostitutes. We both didn’t trust each other. You did s— I did s—. You said you were messing with meek a few years b4 y’all got together and I’m not mad at that.

Minaj previously rapped about not meaning “to cut” an ex in her 2014 song “Bed of Lies,” though she did not name Samuels specifically.

According to multiple outlets, a video released in 2014 shows Minaj chasing Samuels with a knife.

Samuels also recalled their “toxic” decade together, tweeting: “Towards the end it got toxic and I just packed up and left. I did things for spite and so did you. I don’t wish you bad and I don’t want us back together just like I’m sure you don’t. I don’t need you, you don’t need me but we will always be linked in the public no matter what.”

He even cordially wrote, “I still don’t have no hate for you cuz I’m happy in my own mind now. Enjoy your album dropping.”

Also referenced in their Twitter feud was Tyga, who Minaj said went to the same doctor as Samuels for a hairline surgery.

“I should’ve never paid for that Damn hairline!!!! It fell back out cuz God don’t like ugly!!!! You used me but God had other plans!!!!!” she tweeted.

But Samuels said he and Tyga went to different surgeons.

“1st off Me and tyga didn’t go to the same dr. We did it the same day. Diff doctors. Listen I don’t know if this has to do with 1st week sales but you need to finish your zen,” Samuels retorted.