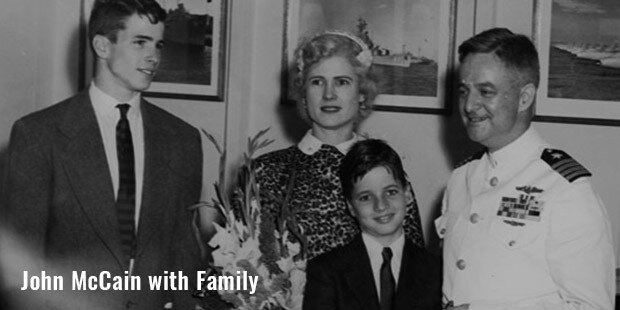 Who Is John McCain?

The son of a decorated Navy admiral, John McCain was born at the Coco Solo Naval Station in Panama on August 29, 1936. He enrolled at the U.S. Naval Academy and was dispatched to Vietnam, where he was tortured as a prisoner of war between 1967 and 1973. After his release, McCain served as a Republican congressman and senator from the state of Arizona, earning renown as a “maverick” who challenged party orthodoxy. He launched a bid for the U.S. presidency in 1999 and earned the Republican nomination in 2008, before losing to Barack Obama. After winning a sixth Senate term in 2016, McCain made headlines for his opposition to Republican attempts to repeal Obamacare and his battle with brain cancer.

On July 25, 2017, less than two weeks after undergoing surgery to remove a blood clot from above his eye and learning he had a brain tumor, McCain made a dramatic return to the Senate to vote to proceed on repealing Obamacare legislation. He also delivered a memorable speech to his colleagues, in which he urged Republicans and Democrats to put aside their differences and work together, but also warned that he would not “vote for the bill as it is today.”

Early in the morning of July 28, McCain made good on his word. Called to the Senate to vote on the “skinny repeal” bill, he was seen conferring with several prominent senators, as well as Vice President Mike Pence, before delivering his decisive “no” vote to torpedo the bill’s chances of passing.

Two months later, when Republican Senators Lindsey Graham and Bill Cassidy spearheaded another attempt at repealing Obamacare, McCain again announced that he would not back the legislation. “I believe we could do better working together, Republicans and Democrats, and have not yet really tried,” he said. “Nor could I support [the bill] without knowing how much it will cost, how it will affect insurance premiums, and how many people will be helped or hurt by it.”

In late November, as Senate Republicans sought to push through a new tax bill, McCain announced that this time, his party had his support. “After careful thought and consideration, I have decided to support the Senate tax reform bill,” he said in a statement. “I believe this legislation, though far from perfect, would enhance American competitiveness, boost the economy, and provide long overdue tax relief for middle class families.” Aided by McCain’s crucial vote, the Senate tax reform bill barely passed in early December.

Even while away from the Senate to deal with health issues in early 2018, McCain demonstrated that he would continue to speak out when necessary. This time, the issue was a controversial House memo that purportedly demonstrated how the FBI and DOJ abused authority when obtaining a wiretap warrant for a Trump campaign associate. Although many Republicans supported the public release of the memo as evidence of bias against Trump, McCain was among those who expressed concern that it would prove damaging to the intelligence community.

“The latest attacks against the FBI and Department of Justice serve no American interests—no party’s, no president’s, only Putin’s,” McCain said. “The American people deserve to know all the facts surrounding Russia’s ongoing efforts to subvert our democracy. … If we continue to undermine our own rule of law, we are doing Putin’s job for him.”

McCain also sought to remain involved in the ongoing debate over immigration reform by teaming with Delaware Senator Chris Coons to propose legislation. In April, he said that the president’s comments about withdrawing troops from Syria had emboldened Syrian leader Bashar al-Assad, his words seeming prophetic when al-Assad was accused of launching deadly chemical attacks against his people later in the month.

In late April 2018, McCain released an excerpt of his upcoming memoir, The Restless Wave: Good Times, Just Causes, Great Fights, and Other Appreciations, in which he delves into the discovery and fallout of his cancer diagnosis, leaving him in a position where he is now free to “vote my conscience without worry.”

Befitting his status as an elder statesman, McCain warns his Senate colleagues against “secluding ourselves into ideological ghettos” with increasing reliance on personalized news sources and like-minded communities. “Before I leave I’d like to see our politics begin to return to the purposes and practices that distinguish our history from the history of other nations,” he says. “I would like to see us recover our sense that we are more alike than different.”

The Restless Wave excerpt also had McCain musing on his own mortality, with a nod to For Whom the Bell Tolls: “The world is a fine place and worth the fighting for and I hate very much to leave it,” he writes. “I hate to leave it. But I don’t have a complaint. Not one. It’s been quite a ride. I’ve known great passions, seen amazing wonders, fought in a war, and helped make a peace. I made a small place for myself in the story of American and the history of my times.”

McCain married Carol Shepp, a model originally from Philadelphia, on July 3, 1965. He adopted her two young children from a previous marriage, Doug and Andy Shepp, and in 1966 they had a daughter together, Sidney. The couple divorced in April 1980.McCain met Cindy Lou Hensley, a teacher from Phoenix and daughter of a prosperous Arizona beer distributor, while she was on vacation in 1979 with her parents in Hawaii. McCain was still married at the time, but separated from his first wife.

In August 2000, McCain was diagnosed with skin cancer (he had lesions on his face and arm, which doctors determined were unrelated to a similar lesion he had removed in 1993). He subsequently underwent surgery, during which all the cancerous tissue was successfully removed. McCain also underwent routine prostate surgery for an enlarged prostate in August 2001.

On July 14, 2017, McCain underwent a procedure to remove a blood clot from above his left eye at the Mayo Clinic Hospital in Phoenix. The operation led to the discovery of an aggressive, malignant brain tumor known as glioblastoma, a condition that had killed McCain’s former Senate colleague Edward Kennedy.

After undergoing his first round of chemotherapy and radiation in mid-August, McCain announced that he would continue working at the Senate between treatment stints.

In December 2017, it was revealed that the senator had been hospitalized for a viral infection and was heading home to Arizona for treatment. Although he expressed hope that he would return to the Senate early the following year, McCain’s recuperation continued well into the spring of 2018.On April 16, McCain’s office released a statement that said the senator was in stable condition after undergoing surgery to treat an intestinal infection, and offered a progress report of his activity since leaving Washington.
“Over the last few months, Senator McCain has been participating in physical therapy at his home in Cornville, Arizona, as he recovers from the side effects of cancer treatment,” the statement said. “He has remained engaged on his work as Chairman of the Senate Armed Services Committee, and has enjoyed frequent visits from his family, friends, staff and Senate colleagues.
Senator McCain and his family are grateful to the senator’s excellent care team, and appreciate the support and prayers they continue to receive from people all over the country.”

US senator John McCain dies at 81

John McCain, a war hero and towering figure in American politics, known for reaching across the aisle in an increasingly divided nation, died Saturday following a battle with brain cancer. He was 81.

The senator’s passing marked the end of a storied, 35-year political career that brought the independent-minded Republican within reach of the White House as his party’s presidential nominee.
McCain had been a rare and outspoken Republican critic of Trump, accusing him of “naivete,” “egotism” and of sympathizing with autocrats. He made a decisive vote last year that killed Republican attempts to repeal Barack Obama’s health care reforms, and Trump never forgave him.