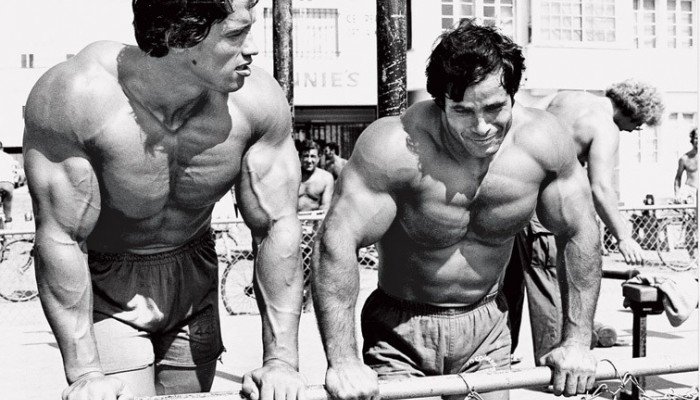 Who is Franco Columbu?

Franco Columbu also known as The Sardinian Strongman, is an Italian born film actor, chiropractor, trainer and nutritionist who used to live in Los Angeles. He is also an author, a former champion bodybuilder, powerlifter and World’s Strongest Man competitor.

Columbu was born in Ollolai, Sardinia Italy. He began his professional athletic career as an armature boxer. He then proceeded to Olympic Weightlifting, powerlifting, and later bodybuilding. His career pick was in 1976 when he first won the title of Mr. Olympia in 1976 and 1981.

Francesco, as he is officially known, is married to his longtime girlfriend Deborah Columbu.

Franco and Deborah have a 10-year-old daughter, Maria. Franco is close to his daughter he is quoted saying “Most of Maria’s friends are told, ‘Don’t eat this and don’t eat that.’ I say, ‘Eat the pasta.’ She eats everything. And she is in the best shape of all of her friends. What I’m saying is, to put a kid on a diet is devastating, in my opinion.”

In 1984 Franco appeared as the future terminator in the American science fiction film, The Terminator. The film was directed by James Cameron and Arnold Schwarzenegger played the main character. The film’s plot is based on a cyborg assassin who is sent back from 2029 to 1984. The mission of the cyborg is to kill Sarah Connor, whose son is believed to be the savior and that one day he will rise to save humans against machines in a post-apocalyptic future.

Being a lifelong friend of Schwarzenegger, who he first met in Munich in 1965 where the two competed against each other on several occasions, they soon became the best of friends.

In 1969 Joe Weider sponsored the two European bodybuilders and gave them a $80 allowance per week to train in America. To pay their way and continue living in America, the two started a bricklaying and patio business called European Brick Works in 1969.

Being considered one of the world’s strongest men

he continued to compete in powerlifting and Olympic weightlifting and held a number of world records. Franco also created a training guide in 1988 for men wanting to get in shape. He also trained movie stars such as Sylvester Stallon for the Rambo and Rocky movies, where he turned a thin Stallone into a muscle-bound soldier. He then went on to become a chiropractor.

He’s trained movie stars such as Sylvester Stallon for the Rambo and Rocky movies, where he turned a thin Stallone into a muscle-bound soldier. He then went on to become a chiropractor.

Franco made a special appearance in the episode of Dead Lift in the television series The Streets of San Fransisco. A deadlift is also among his best powerlifting as he has lifted 750 lbs / 340.2 kg (in some training sessions he was reported to have lifted over 780 lbs / 353.8 kg, all at a bodyweight of 185 lbs / 83.9 kg)

Franco’s major step towards a professional career was boxing. He started with boxing then persued other interest. He could not proceed with the boxing career due to massive pains and injuries resulting from fighting and training. In one fight he won by knockout in the first round, but the next day he realized he had injuries over his body and couldn’t remember what happened.

According to Franco having a diet is essential for any bodybuilder. The diet enables one to give the body all the necessary nutrients that it requires to build muscles and loose fats. His training diet was as follows;

Columbu is a renowned bodybuilder who has performed many stunts across different stages. His bodybuilding career started when they were challenged to come to America together with his friend Arnold Schwarzenegger. Ever since he has accomplished quite a lot winning many bodybuilding titles including the following:

Franco Columbu would bench press 520 pounds, deadlift 750, and squat 655. He bent a bar across his face in one contest, carried a refrigerator on his back in another, power-lifted a car, and blew into a hot water bottle ’til it exploded like a party balloon, spraying water all over the audience.

Besides being a bodybuilder, Franco Columbu is also an accomplished actor and a former contestant in World’s Strongest Man. His well-established career has led him to accumulate an estimated net worth of $10 million as of 2018.

Seeing that Franco’s best buddy and training partner was Arnold, it’s safe to say that Mr. Schwarzenegger was probably his main influence inside, and on occasion, outside of the gym.

Being the best man at Arnold’s wedding and supporting him through every training session, the two would rarely be seen apart. Franco describes Arnold as the best training partner he ever had.

I love you Franco. I will always remember the joy you brought to my life, the advices you gave me, and the twinkle in your eye that never disappeared. You were my best friend. https://t.co/X3GhZKlgAd

“One time we were doing squats—sets of 10 with 405 pounds. He walked away after his set to get water, and I was tired, so I did eight. He comes back and says, ‘Hey, Franco, I saw you in the mirror, and you did only eight. Do the other two, and start all over.’ He had discipline. If it weren’t for him, I don’t know if I’d have won Mr. Olympia.

Franco doesn’t spend as much time in the gym as he used to, instead he’ll go for shorter workouts lasting around 20 minutes three times per week. He also likes to play tennis with Arnold on the weekends, cycling and hiking are all on his list of activities.

Franco Columbu is the former Mr. Olympia who died on August 30 at the age of 78. Columbu, a native of the island of Sardinia in Italy, long considered one of Arnold Schwarzenegger’s closest friends and confidants. Columbu passed away just over three weeks after his 78th birthday. The bodybuilding legend is survived by his wife, Deborah and their daughter, Maria.

What we can learn from Franco Columbo

Franco had a passion for all things fitness related, especially anything involving lifting weights and testing his strength. From boxing to strongman competitions and all the way to Mr. Olympia, Franco’s done it all. If you inspire to be big and strong like Franco or have the desire to progress to greatness, don’t let anything stop you.

It didn’t stop Franco, even months after a serious leg injury, he was back up on his feet training for the Olympia where he took 1st place. With the same determination and true grit as franco, you too can have your very own physique of greatness.