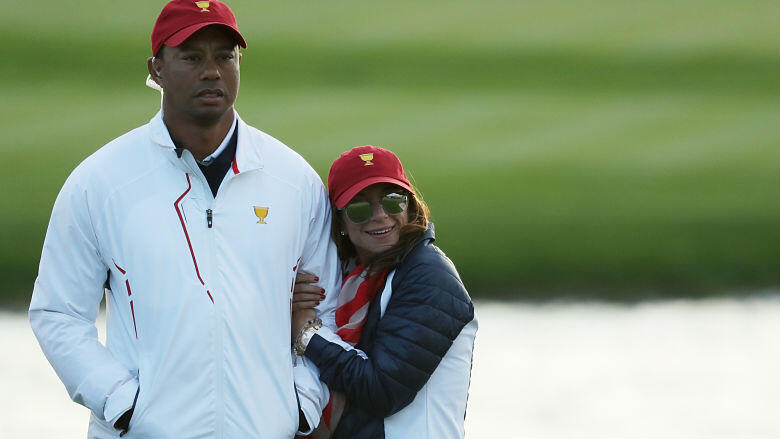 Tiger Woods’ girlfriend, Erica Herman, showed him some love after he finished his round at the 2018 PGA Championship. Herman waited for her boyfriend as he made his way from the 18th hole to turn in his scorecard. As he approached her, the two shared a couple of kisses and exchanged a few words. As Woods turned to walk into the building, Herman gave him a couple of good taps on the behind — and social media went wild.

Although many people know that Woods has been dating Herman — the general manager of his restaurant in Jupiter, Florida — for about a year, the pro golfer still takes a lot of heat on social media when he’s out and about with a new woman. While the public seemed to accept his relationship with Olympian Lindsey Vonn, they have been less accepting of his romance with other girlfriends, including his current one.

Some social media users posted some not-so-nice comments following Woods’ and Herman’s PDA. You can read some of those tweets below.

“Ummm. She kissed you on the lips and patted your bum,” wrote one social media user.

“Tiger Woods earns a kiss and a pat on the rear from some female tart after a rip-roaring comeback at the #PGAChampionship We don’t call them ‘ladies’ much anymore,” tweeted another.

“That was @TigerWoods daughter he kissed right?” questioned a third.

This isn’t the first time that haters have taken to slamming Herman, either. After last week’s British Open, a few social media users posted about their disapproval of Herman.

For the most part, however, people seemed thrilled that Woods was in contention today, and the amount of people talking trash about Herman was minuscule in comparison. Woods’ name was trending for much of the afternoon and the majority of the comments were positive ones about his golf game.

Fortunately, Woods is able to live his life out of the public eye, for the most part. He spends a lot of time in Florida and he rarely finds him name in the gossip columns. He doesn’t seem to let any of the negativity get into his head.

During an interview with the press this evening, Woods said that he was “pleased” with the year he has had.

So I had to kind of figure this out on my own and it’s been really hard, it’s a lot harder than people think. And I’m just very pleased at what I’ve done so far and now to be part of the Ryder Cup conversation, going from where I’ve come from to now in the last year, it’s been pretty cool.”

Erica Herman has been introduced to us as Tiger Woods’ latest girlfriend. Woods is known to have been involved with numerous women in his lifetime. Since it has not been long since he dated Erica, we do not have much information on her background, unfortunately.

Talking about what Herman does for a living, she is highly skilled in managing and is involved in the food business. Erica has worked as the manager for various restaurants in her career but recently, she had been working in Jupiter, Florida at a restaurant owned by Tiger Woods himself. It is not quite clear where Herman currently works but prior to this, she worked at one of the newest restaurants opened by Woods until the October of last year.

Talking about her past, according to various sources including Radar Online, it has been mentioned that Herman’s past is quite dark. She used to party day in and day out and her brother has been arrested for drug cases as well. Herman always visited nightclubs and made out with men. But hopefully, she has kept her past behind her and began a new life with her boyfriend Tiger Woods.