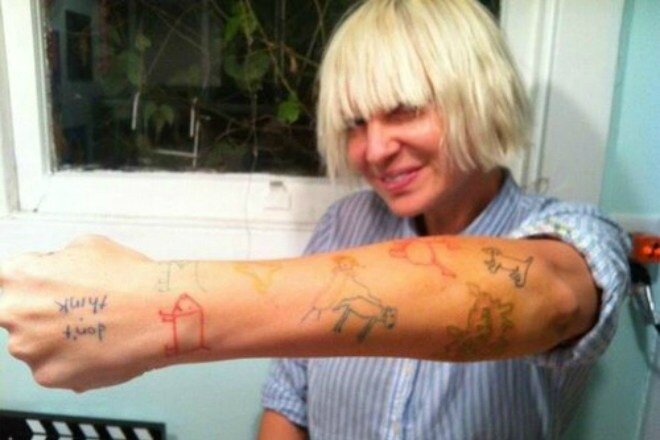 Sia is an amazing Australian singer who became known for the song “Breathe Me”, the soundtrack for the series Six Feet Under. However, fame played a damaging trick on the woman: the busy schedule and the personal tragedy led her to drug abuse.

As she overcame the dark period and got rid of suicidal thoughts, the singer turned over a new leaf in her life and began to write music for already popular stars: she created hits for Beyoncé, Rihanna, and Katy Perry. In a while, Sia decided to come back to her solo career and continue to conquer the world of music.

Sia Kate Isobelle Furler was born on December 18, 1975, in Adelaide, South Australia. The atmosphere of artistic anarchy surrounded her from an early age. The future star’s father, Phil Colson, gave lectures on art in a local college; the mother, Loene Furler, was a housekeeper and brought up her daughter. In their spare time, the parents performed in cafes and bars and had their band, The Soda Jerx.

In her youth, Kate was a fan of Sting, the classic rhythm & blues singer Aretha Franklin, and Stevie Wonder. Later, Sia told journalists their voices mixed up in her head and continued to sound there.

The artist often said her parents went touring frequently and left the girl home alone. To entertain herself, Sia was dancing in front of a mirror and copied her favorite singers. Many years later, the music video “Chandelier” was based on these childhood dreams.

Sia hated school. Studying was difficult for her, and she was not much popular among her classmates: they only laughed at the girl and humiliated her.

At 17, Furler appeared on the stage for the first time as a member of the local jazz-funk band The Crisp. However, she did not stay there for a long time. In this group, the woman recorded two albums, Word and the Deal and Delirium. Both of them failed commercially. However, thanks to these works, the young singer realized it was high time to take up a solo career.

In 1998, Sia moved to London. She got lucky: the beginning singer became a backup vocalist for the group Jamiroquai which was pretty popular. She had the album Only See released. In 2000, the ambitious talent signed a contract with Sony Music.

The next year, the singer’s debuting solo album Healing Is Difficult came out; critics welcomed it. Not only Great Britain but also the rest of Europe and the USA became familiar with the talented Australian.

The situation changed after the third album release. One of the songs from Color the Small One, “Breathe Me” topped American charts. This hit became a soundtrack for the series Six Feet Under. Later, this song was used at Victoria’s Secret fashion show, the Australian supermarket commercial, the Olympic Games in Beijing, and the trailer for the popular game Prince of Persia.

Four years later, the next album, Some People Have Real Problems, was presented; it became number 26 in 200 Billboard. In 2010, the singer released We Are Born. Its single, “You’ve Changed,” was chosen as a soundtrack for The Vampire Diaries.

By that time, Sia had begun to write for other stars as well. In 2010, she created four songs for Christina Aguilera’s Bionic; according to Christina, these compositions were the heart of the whole album.

The same year, Sia announced she did not want to continue her solo career. The woman was diagnosed with a serious thyroid disease (Basedow’s goiter) which strongly influenced her wellbeing. Still, she continued to create hits for other singers. Sia wrote songs for Kylie Minogue (“Exercise”), Lana del Rey (“Sweet Design”), Maroon 5 (“My Heart Is Open”), Chris Martin (“Broken Glass”), Celine Dion (“House of Fire”), Britney Spears (“Perfume”), Beyoncé(“Pretty Hurts,” “Footprints”), Katy Perry (“Unstoppable”). The song “Diamonds” performed by Rihanna is Sia’s most popular work; it topped music charts in more than 20 countries for several weeks. As Sia confessed, it took her 14 minutes to create the song.

The singer also presented soundtracks for many popular movies, such as Twilight (“My Love”), The Hunger Games (“Elastic Heart”), The Great Gatsby (“Kill and Run”). In 2013, Billboard published the traditional thematic magazine with the best singers of the year. There was a woman with a paper bag on her head; it said: “This artist is responsible for 12m track sales, has a new single on The Hunger Games soundtrack & doesn’t want to be famous.” One could remove the paper bag and see Sia. For a long time, she hid her face and wore wigs. When she appeared on The Ellen Show, the TV presenter asked her about that. The reason was simple: Sia could get some bread or go to the bathroom in a roadside gas station, and nobody would follow her with cameras. Sia hated fame.

By the way, the singer does not shoot for her own music videos. Still, it is impossible to mistake her works for someone else’s: Sia’s voice is unique, and the young dancer Maddie Ziegler appears in the majority of her videos. This girl in a white wig became the spokesperson of Sia. There are three integral parts in the artist’s masterpieces: Sia, incredibly talented and charming Maddie, and choreographer Ryan Heffington.

Ziegler shot for Sia’s music video for the first time when she was eleven: it was “Chandelier.” Later on, “Elastic Heart,” “Big Girls Cry,” “Cheap Thrills,” and “The Greatest” followed. Each work was sensational.

In 2014, Kate Furler blew the world with the new solo album 1000 Forms of Fear. The main song, “Chandelier,” was nominated for Grammy four times.

In 2015, more than a third of the Australians wanted Sia to represent the country at Eurovision; it was the debut of Australia in the competition. However, the committee of the local channel SBS chose Guy Theodore Sebastian.

In January 2016, the next album, This Is Acting, was released. Sia organized a tour and gave the first concert in Moscow in August 2016. At the same time, the musician presented the music video for her song “Cheap Thrills” with Sean Paul. The video was funny: the dancing competition on an old TV show was interrupted by a couple of competitors wearing Sia’s trademark wigs.

In June 2017, the single and music video “Free Me!” came out; the actresses Zoe Saldana and Julianne Moore participated in it. The money from the song sales was donated to a fund for people with HIV/AIDS.

In September, more songs and videos came out: “Rainbow” (the soundtrack for My Little Pony: The Movie), “Dusk Till Dawn” (featuring Zayn Malik), and “Alive.” The latter song became a lead single supporting the re-released album This Is Acting.

The singer’s personal life has been dramatic. In the early 2000s, the young woman met her first love, Dan Pontifex, in London. The couple traveled to Thailand; however, Dan had to return to London earlier than Sia because of his work. A week before the singer was to come back, a car ran down the man.

After the tragedy, Sia was depressed; she abused alcohol and drugs. Desperate, she tried to commit suicide; her friend called her on time and saved her. In 2004, after a new nervous breakdown, she underwent a course of treatment. Four years later, she came out as bisexual.

In 2009, Sia was named one of the most influential LGBT people in Australia. The musician was dating the soloist of the group Le Tigre, J.D. Samson. For some unknown reason, the couple split up.

In 2014, Kate married the American director Erik Anders Lang; at the end of 2016, they divorced. The couple had no children.

After the break-up, the artist began to lead a healthy life: together with Demi Moore, she took up yoga classes and became vegetarian. The singer is in the perfect shape: her height is 164 cm., and her weight is 62 kg.

Sia and her dog appeared in a social ad that encouraged people to sterilize pets in order to prevent their uncontrolled reproduction.

Today, the singer is single and ready for a new relationship.

Although Sia tries to avoid cameras, she does not succeed sometimes. In 2017, her fans were shocked to see the woman’s nude photo on Twitter; she was portrayed from the back. As the woman discovered, the paparazzi took several pictures of her when she was naked and swam in a swimming pool; there was the bargaining for those photos on the Internet. Sia asked people to save their money: anybody could see the photo on her page for free.

The artist’s tattoos are worth noticing: her arms are covered with pictures similar to those that small children draw.

In 2017, Sia announced she was working on her eighth album We Are Your Children. Fans expected it to be released at the end of 2017, but it did not happen.

However, the singer continues to create. In April 2018, Sia and the French DJ David Guettapresented their work “Flames.” The music video was published on the musician’s channel. Guetta played the role of the evil Chinese emperor; the actor Danny Trejo (Machete) took the role of a kind Japanese martial artist.

“Flames” became the fourth duo song of Sia and David Guetta. In 2011, they released “Titanium” nominated for the APRA Awards as Dance Work of the Year.

In February 2018, the premiere of the third part of 50 Shades of Gray took place; Sia wrote “Deer In Headlights” for the movie. She also worked on the fairy tale A Wrinkle in Time and wrote the song “Magic” for it.

Above all, Celine Dion has revealed the secret: there will be three songs created by Sia in her upcoming album.

Despite the fact that the artist’s schedule is pretty busy, she does not forget her fans. She regularly posts photos from concerts and video fragments from her vacation on her Instagram page. People can also find the materials related to the singer’s career and biography on her official website.