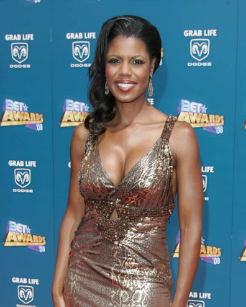 Who is Omarosa Manigault?

Omarosa Manigault is an American reality game show and reality show personality. Additionally, she is a former political aide. She has appeared in ‘The Apprentice’ and  ‘The Celebrity Apprentice’.

Manigault was born in Youngstown, Ohio on February 5, 1974, to parents Theresa Marie and Jack Thomas Manigault Sr. Her father was murdered when she was seven years old. She is of American nationality. Furthermore, she belongs to African-American and Nigerian ethnic background.

Talking about her education, Manigault graduated from The Rayen School. Later, she received a bachelor’s degree in broadcast journalism from Central State University in 1996. Furthermore, she also attended the Howard University and earned a master’s degree.

Omarosa Manigault dated Aaron Stallworth for a brief amount of time. They got married in 2000 and later she changed her last name to Manigault-Stallworth. However, the marriage came to an end in 2005. Next, she was in a relationship with actor Michael Clarke Duncan since summer of 2010. They got engaged in February 2012 but the pair could not get married due to the untimely demise of Michael.

Manigault began dating WWE star, Titus O’Neil from August 2013. The relationship lasted only a year and they eventually broke up. She is currently married to Florida-based pastor John Allen Newman. The pair began dating in 2015. Eventually, they got engaged in July 2016 and they married on April 8, 2017. The wedding ceremony took place in Donald Trump’s hotel in DC.

Omarosa : Career, Salary, and Net Worth

Manigault initially worked in the office of Vice President Al Gore in the 1990s. She received public attention after she became the participant on the first season of NBC’s reality television series, ‘The Apprentice’. Later, she also took part in the ‘Celebrity Apprentice’. In February 2013, she appeared in Trump’s ‘All-Star Celebrity Apprentice’.

Manigault became one of the nine members of President-elect Donald Trump‘s transition team in December 2016. She joined former NFL stars Ray Lewis and Jim Brown to meet with President-elect Trump. Eventually, the White House announced her resignation on December 13, 2017. Manigault has six credits as an actress. Some other movies and television series that she has appeared in are ‘We Are Family’, ‘Touched’, ‘Knock ’em Dead’, ‘Howard Stern on Demand’ and ‘Girlfriends’ among others.

Manigault garnered the Teen Choice Award nomination in 2004 for her appearance in ‘The Apprentice’ in the category of Choice Reality/Variety Jackass.

Manigault has not revealed her current salary. However, she has an estimated net worth of around $ 3.5 million at present.

Manigault became part of a controversy after she accused fellow ‘Apprentice’ participant Ereka Vetrini of calling her inappropriate words. Additionally, she also became part of another controversy after La Toya Jackson made comments that insinuated that Manigault had murdered her fiancé, Michael Clarke Duncan. People have often criticized her for getting involved in the Trump Presidency. At present, there are no rumors concerning her life and career.

Unhinged also posits that Trump may have received personal counseling from the Rev Paula White, the pastor of the New Destiny Church, a non-denominational megachurch in Apoka, Florida. According to Manigault Newman, White had blocked her from her job of choice at the White House, head of the Office of Public Liaison.

She was then warned by a Trump family member to “back off” on account of Trump and White enjoying a “special relationship”. Not content to let the story end there, Manigault Newman asks whether White’s position as Trump’s spiritual advisor “had ever been missionary”?

Disturbingly, but not surprisingly, we are also advised that Trump had initially asked to be sworn in over a copy of Art of the Deal, instead of the Bible.

Unhinged also sprinkles a few crumbs for the Mueller investigation, and offers several substantive personnel critiques. Manigault Newman writes that the president asked her whether she approved of his firing of former FBI director James Comey, a question she sidestepped. Omarosa recalls Trump saying: “Hey Omarosa, what do you think about Comey? I had to let him go, right? He could not be trusted; he was not loyal.”