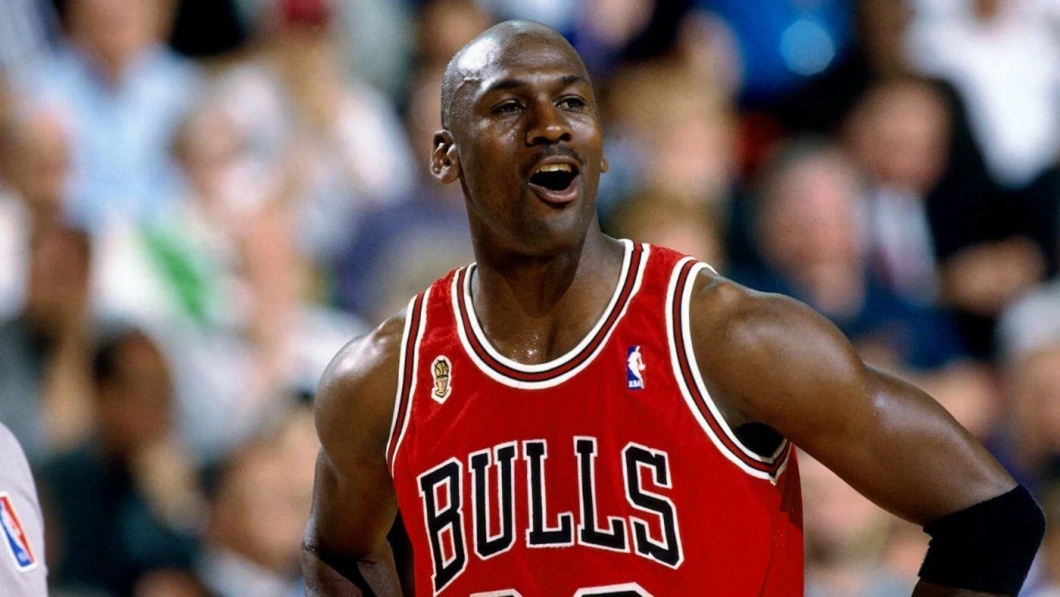 Who is Michael Jordan?

Michael Jordan is american born legendary NBA basketball player who had been the shooting guard of “Chicago Bulls” in 1984-1998 (with a break). He led his team to the NBA title of the champion six times and won two Olympic gold medals. The sportsman is the official frontman of Nike and the billionaire.

Michael was born in New York on February 17, 1963. The parents of the would-be basketball star were not tall. There were five children in the family: Michael, his elder siblings Larry and Deloris, and the younger James Jordan Jr. and Roslyn. When a kid, Michael was engaged in baseball; at 12, he and his school team reached the final game of the minor league.

In a while, he became the baseball champion of North Carolina where his family had moved. Jordan was also named the most precious player – that was another great achievement in baseball. Then, the teenager took fancy in basketball; the father even built a basketball ground in the yard.

At 15, Michael Jordan’s height was 175 cm., so he was mastering jumps. Later, the sportsman’s height was 198 cm., and he weighed 98 kg. Michael’s speed was high, and he trained hard. Despite this, he could not become the high school team member. The failure upset the young man, so he decided to demonstrate his coach was wrong. Michael was doing his best during all matches and receiving 28 points in each game.

He was engaged in baseball, athletics, and got admitted to the school football team. Michael’s persistence brought its fruits: in the 11th grade, he finally got accepted to the school basketball team where his elder brother wearing number 45 played. Michael chose 23: he wanted to be as good as Larry or, at least, half that good.

Jordan kept this number until the end of his career. The first success encouraged the ambitious guy, and he continued to work. In summer 1980, he went to the North Carolina University camp where he impressed coaches so much that they offered him to study. In 1981, Jordan entered this university.

Simultaneously with his studies, the young man began to practice in the local basketball team. He proved himself to be the indispensable player, although the coach set more ambitious goals for Michael in comparison with other players. This plan worked out. In the first year, Michael joined the starting team of his university.

For the first three seasons, Jordan developed his talent and received the Naismith Award. Besides, the young player took part in the Pan American Games and showed the best results in the national team. He took part in the Summer Olympic Games 1984 and achieved a lot. To participate in the NBA Draft, the young man gave up the university a year before the graduation.

Chicago Bulls selected the young man. However, the lack of discipline and low-quality equipment disappointed Jordan. In spite of these conditions, he continued to train hard and joined the starting team; his results were excellent: 28 points per game. Even opponents’ fans liked Jordan.

In a month after Jordan began his professional career, the magazine “Sports Illustrated” published Michael Jordan’s photo on its cover and wrote: “A star is born.”

1984 brought the first ad contract with Nike: the sneakers “Air Jordan” came out with the traditional colors of Chicago Bulls, red and black.

The NBA banned using these sneakers for the aggressive colors and the absence of white. Still, Jordan continued to wear them; Nike paid $5 thousand each time and used this fact in its ads.

The debutant became the member of the main team in the the NBA All-Star Game which made the League’s veterans unsatisfied. As a result, players refused to give passes to Jordan. Despite this pressure, he managed to become the best new player of the association. He was also named the third player based on his NBA results and included in the second best five-line NBA players. Thanks to Michael, the team got in the play-off for the first time in the previous three years.

In the second season, Jordan was recovering after a leg injury. By the moment Chicago Bulls reached the play-off, Michael played and got 63 points in play-offs. Nobody has broken this record. In the next year, the basketball player fully recovered and became the second best-resulting player of the association.

Jordan began the third season from players’ replacement which helped the team overcome the first play-off round. The sportsman was named the best attacking player of the League. In the next season, he was the best in the number of points as well.

In the 1980/1990 season, Michael became the team’s captain; many promising players joined the team. On May 7, 1989, Michael Jordan and his club had to face Cleveland; after a fall, the Chicago Bulls captain stepped to the free-throw line. The basketball legend was aware of his actions and performed his famous jump with his eyes closed. Video cameras registered that moment. These screenshots made the young man more popular among basketball fans.

It is interesting that Michael Jordan opens his mouth and shows his tongue while scoring. The champion inherited his manner from his father and grandfather.

The new coach Phil Jackson was the proponent of the collective style of playing, but Michael was insisting on the freedom of his actions. Eventually, they found a compromise, and the team transformed into something special. For the first time, Jordan became the most precious NBA player; he was so happy that he cried. The next season brought the second MVP. The sportsman was working on his muscles; his former offenders feared him.

Joran turned basketball into the real art. The tricks he demonstrated on the court attracted public interest. The investments in this sport grew up to $10 billion.

As the national team member, Jordan participated in the Olympic Games in Barcelona in 1993; the Americans took the gold. In October of that year, the sportsman said he was going to quit the sports because he had lost interest to it. At that period, Michael was undergoing through the family tragedy: his father died.

In honor of the player, Chicago Bulls organizers decided to erect the monument at the United Center stadium entrance. The sculpture was created soon: it was the figure of the champion in the air before his unique dunk.

In spring 1994, the sportsman signed the contract with the baseball team Chicago White Socks: he explained this decision by the fact that his deceased father wanted to see his son as the baseball league player. Throughout his short baseball career, Jordan played for Birmingham Barons and Scottsdale Scorpions. In March 1995, Michael came back to the NBA to join Chicago Bulls.

Although the season finished with the team’s failure in the play-off, this motivated to prepare for the next season appropriately. Then, Jordan won the MVP title three times: these were probably the most wonderful victories in his careers.

In January 1999, Jordan announced he was leaving the professional sports for the second time. However, he joined the NBA again as the co-owner and general manager of “Washington Wizards.” In September 2001, he began to play for this team. In two seasons, he improved the team’s results considerably.

Jordan became the best 40-year-old player in the entire history of the league. Thanks to him, all seats were taken during Washington Wizards matches.

In 2003, when Washington Wizards fought Philadelphia 76, the sportsman appeared on the basketball court for the last time. After the game finished, the audience kept applauding for three minutes.

After the third time Jordan left the sports, he intended to be a manager, but the club owner dismissed him. Jordan viewed that as the betrayal.

To keep fit, the basketball player took part in charity golf tournaments among stars. Later, he took an interest in motorsports. In 2004, he owned the professional team “Michael Jordan Motorsports.” He also worked on his own clothes trademark.

ESPN named Jordan the best basketball player of all times; LeBron James placed the third. In one of his interviews, Michael admitted he would not mind playing with him. Jordan considers Kobe Bryant to be the best the NBA player and his friend, although Bryant stole all Jordan’s achievements.

Fans call Michael Jordan “the basketball god.” Roland Lazenby wrote the book “Michael Jordan: The Life” telling the story of the sportsman’s success. In 2009, Jordan’s name appeared in the Basketball Hall of Fame.

The basketball player’s life was stormy: the man had always been popular among women and had many affairs. Juanita Vanoy was his first partner. In 1989, the couple married officially; in 1991, Michael bought a luxurious 17-hectare mansion in Highland Park for the family. Three children were born in this marriage: the sons Jeffrey Michael, Marcus James, and Jasmine.

At the beginning of 2002, Juanita reported she had filed for the divorce.

She said that the fundamental contradictions were the reason for that. Still, the couple managed to make it up; the divorce was postponed until 2006 when it turned out Michael had an affair with another woman. Karla Knafel’s complaint and the $5 million compensation demand were dismissed by the court; Michael allegedly promised her this money for not announcing her pregnancy from him in 1991.

The DNA analysis showed the former sportsman was not the child’s father. However, this story worsened the Jordans’ relationship completely; they divorced by mutual consent. Juanita received $168 million of the exit package which was the recording sum among celebrities.

Five years later, Michael made a proposal to a 32-year-old Cuban model.

They were seeing each other for three years. Finally, Yvette Prieto accepted the proposal, and the couple announced their engagement. On April 27, 1993, the lovers married in Jupiter Island.

In 2012, Jordan decided to sell the mansion in Highland Park for $29 million. Later, he purchased a house in Florida.

In February 2014, Jordan’s wife gave birth to the twin girls Ysabel and Victoria.

In 1992, the sportsman starred in the music video of his namesake Michael Jackson. The stars play basketball in the video “Jam.” It is interesting that this word may be interpreted as the improvisation of a music group and a kind of dunk from above.

In 1996, Michael Jordan played himself in the fantastic animation movie “Space Jam.” Together with the sportsman, the cartoon character Bugs Bunny and the movie star Bill Murray fought aliens.

According to Forbes, Michael Jordan is the richest basketball player in the world: in 2018, his fortune is $1.65 billion. His capital includes the salary, bonus money, and ad earnings.

Inspired by the man. Carried by the family.

Learn how Wings sets up the next generation for success. https://t.co/Ot7KoagYWr