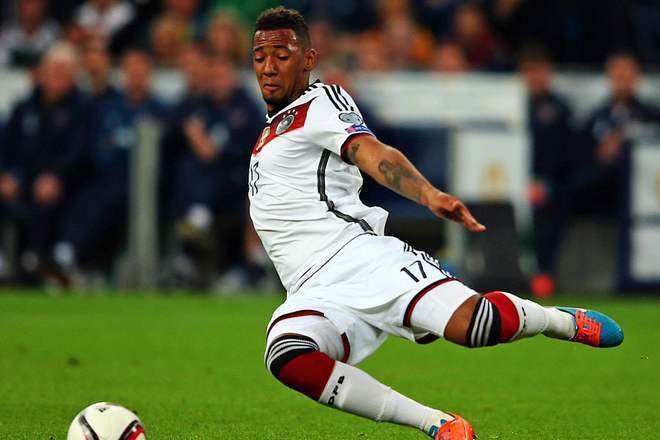 Who is Jerome Boateng?

Jerome Boateng is a professional German soccer player of Ghanaian origin  is at the peak of his fame. He plays for FC Bayern Munich on the position of the midfielder; sometimes he plays in the right flank.

Jérôme Agyenim Boateng was born on the 3rd of September, 1988 in Western Berlin. His father Prince originated from the Republic of Ghana, and his mother Martina has German roots.

His father left his native town and went to Hungary, but later he decided to come back to Germany. Prince wanted to study administration. However, he didn’t achieve success in this idea. Boateng worked partly as a waiter and a DJ, and at the same time was playing football in Berlin for the local football club. What about his father’s brother, in youth he played for the national team of Ghana.

Few years before Jérôme’s birth a son was born to his father, the footballer’s stepbrother– Kevin-Prince Boateng. By the words of their father, the brothers have nothing in common. Jérôme is punctual and responsible, and Kevin is the exact opposite.

Despite the difference in the tempers, the father took efforts so that Jérôme and Kevin-Prince could spend a lot of time together. He was training his sons and taught them to kick the ball only with their left or just right leg.

Jérôme has one more brother – George Boateng. People often confuse him with his namesake – the Netherlands football player of Ghanaian origin. George is the German-Ghanaian rapper. The public knows him under the pseudonym of BTNG. Jérôme also has a younger sister Avelina.

Prince lost contact with his son Kevin when he moved to England. Here he leads active social life; he regularly visits nightclubs and parties. Jérôme has different priorities. Boateng doesn’t drink alcohol, doesn’t smoke. He is a thoughtful and calm person.

After the German reunification, Boateng entered the Academy of Tennis Borussia Berlin football club where he was studying for six years. In 2002 he transferred to Hertha BSC academy where he studied till 2006.

The debut match of Jérôme took place on the 10th of March 2007 for Hertha FC against the team of Borussia. The football player has played seven games until the end of the season, and in summer of the same year, he transferred to Hamburg FC. At that time the team paid €2,5 million for the midfielder. Jérôme has scored his first goal on the 30th of August, 2009, to the gate of Runners FC.

In May 2010 the defender transferred to Manchester City FC and became the first beginning player under the leadership of Roberto Mancini. The football club paid £10,4 million for this transition. But the footballer’s career in this team turned out not to be so successful. So, on the 14th of July, 2011 Bayern Munich FC agreed on the purchase of Boateng: the sum of the transition reached €14 million.

In this club the football player was successful: the first season turned out to be extremely plentiful, the football player spent 4825 minutes on the field. Jérôme has played 12 matches without replacements, but on the 11th of November, he got trauma in the game against Eintracht. After he had recovered, he appeared on the field in the middle of December.

Bayern Munich football club and Jérôme concluded the 3-year contract in summer of 2013. The football player has scored his first goal during the European tournaments on the 17th of September, 2014. Jérôme didn’t participate in the most of the matches of 2016-2017 because of his trauma.

What about the footballer’s international career he has joined the symbolic team of UEFA European Championship. As a part of German national team, he played his first match against Russia on the 10th of October 2009. That time he distinguished only with the fact that he received the red card.

At FIFA World Cup 2010 he took part in the match with Ghana. At UEFA European Championship he has played all the five matches. According to the results of the tournament in 2014, he got to the list of 33 best football players. At UEFA European Championship 2016 Jérôme got the position of the central defender. Already on the 26th of June, 2016 the football player has scored his first goal during the match against the Slovakian national team.

Jérôme Boateng met his present wife Sherin Senler when he was 17 years old. The couple has two children: twins Soley and Lamia and were born on the 8th of March, 2011.

The relationship between the young people wasn’t ideal, and they even separated for some time. Some journalists were talking about Boateng’s infidelity. By rumor, he betrayed his wife with the underwear model – Gina-Lisa Lohfink. Even though the photographers captured Jérôme with the model, the football player and the girl denied these rumors. The girlfriend of the football player responded to this quietly and said that anyway she and Jérôme had already broken up.

After that Boateng visited Sherin and came to Berlin from Munich to see their children. In November 2013 the young people reunited. The football player made the girl a proposal to marry him, and Sherin accepted it. After that, the private life of the couple has improved to the best.

In 2016 the journalists were discussing that Jérôme has forbidden his family to go with him to France to UEFA European Championship. The defender decided that there was a risk of terrorist attack. The event which had happened at the stadium of Paris on the 13th of November, 2015 became the reason for such a decision. That day the terrorists realized a range of terrifying attacks.

In the interview concerning this moment, Jérôme has highlighted that during the championship he wanted to concentrate on the football. Also, he said, that he would feel calmer when his wife and children would be safe.

At present, the footballer continues to play for Bayer Munich FC. Joachim Löw has included Jérôme to the primary structure of the national team at FIFA World Cup 2018 in Russia. Regretfully, the Germans didn’t leave the group.

Jérôme Boateng is very active on the Internet. The football player has official pages in public social networks: Twitter, Instagram, and Facebook. Here he regularly posts photos and videos of the events of his life.

The football player has a remarkable title in his biography. By the opinion of GQ magazine, in 2015 Jérôme became the most elegant man in Germany. He combines various styles and never wears more than three colors in his outfit.

Jérôme is 192 cm high, and he weighs about 90 kilos. The footballer plays under the 17th number in Bayern Munich FC.

The National team of Germany: