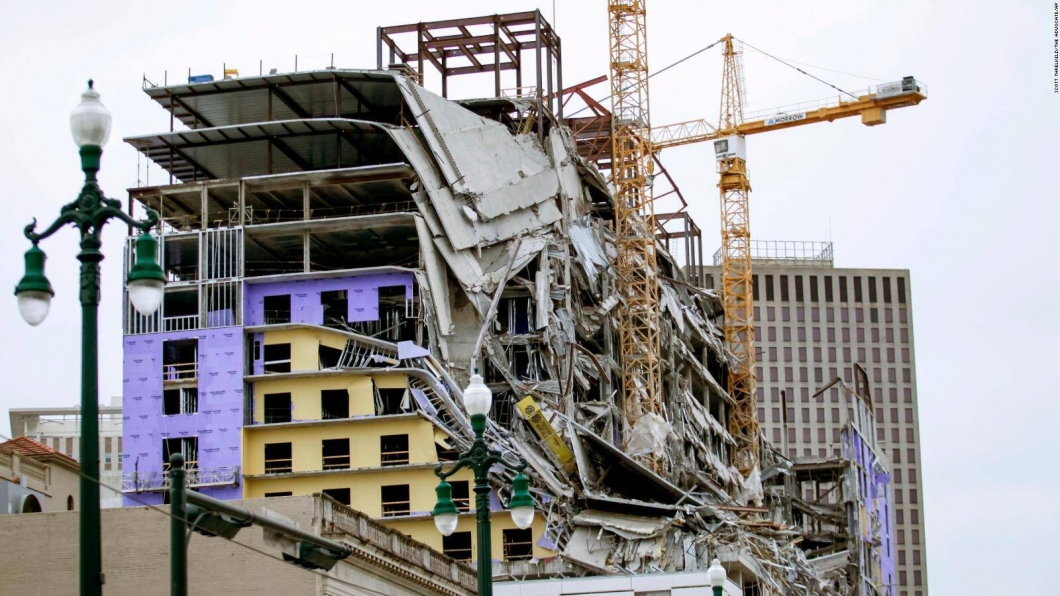 Shocking footage shows pedestrians scrambling for cover as the top floors of the building fell to the ground in a giant cloud of dust.

The incident happened on Canal Street, a major thoroughfare through the centre of New Orleans, on Saturday at around 9am local time.

First responders from the fire and police departments are at the scene with at least 18 injured people taken to hospital, nola.com reports.

Emergency crews desperately searched for missing people – but it was halted at 7pm local time due to ‘increased danger.’

“Our biggest fear right now is the crane, it’s 270 foot,” McConnell said. “So the reach of that crane, if it were to come down has a tremendous amount of weight on it.”

At least one person is dead and two people are unaccounted for, according to Louisiana State Governor John Bel Edwards.

The city’s emergency response authority urged locals to stay away from the area.

It tweeted: “This is an active scene. Please avoid the area & listen to public safety officials. ”

“Now is not the time to be sightseers,” Governor Edwards added.

“You’re not going to be allowed anywhere near the site of the collapse. So please do yourself a favor, but more importantly do the first responders a favor so they can focus on the situation at hand and not have to focus on pedestrians.”

Around 45 people were working on the site, according to reports.

One bystander said he saw workers “hanging on”, with the crane “just sort of dangling there.”

“It was a deep, rumbling sound, like an airplane maybe. It drew my head immediately”, another eyewitness said.

“It looked like the concrete just slid from the top all the way down to the street.

He also recounted how one bystander narrowly escaped death.

“One guy – I don’t know how he was spared — there was rubble all around him.”

The 350-room Hard Rock Casino hotel was slated to open in the spring of 2020 and has been under construction for around a year.