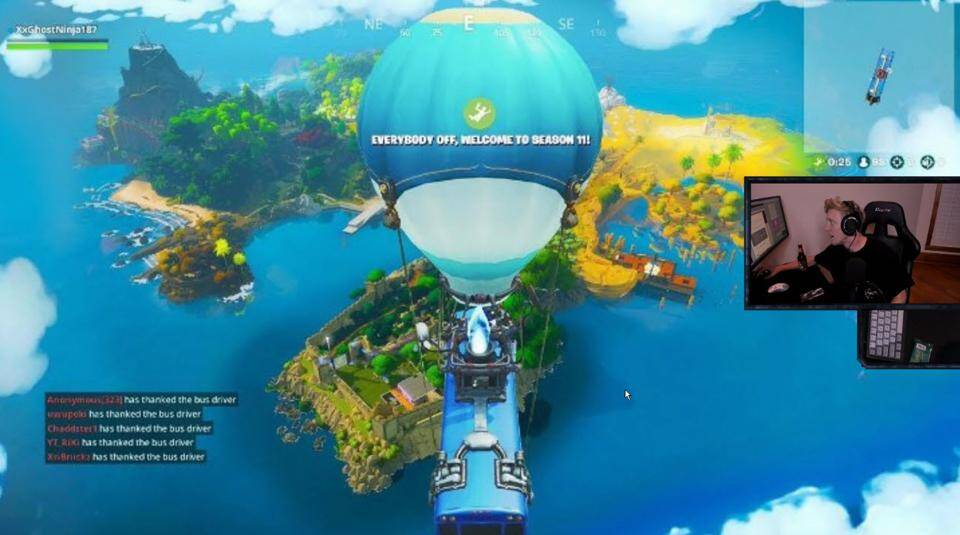 We are currently heading into hour five of Fortnite Season 11 watch, or Chapter 2, Season

1, if you prefer, which may be how Epic ends up referring to the game from now on.

But right now there is no game, only a black hole where a game is supposed to be. At 2 PM ET, Epic delivered on Fortnite’s promised “The End” event, nuked the map with a meteor and a bunch of rockets, and sucked the entire playerbase and island into the space-time continuum. All that’s left when you load up the game is a black hole, and streamers are currently earning big bucks…doing nothing but streaming that black hole.

There is quite literally nothing else to do in Fortnite right now, since the game has been reduced to this one livestream. Over time, mysterious numbers have appeared on the black hole livestream to spell out:

“Others were outside the loop.”

But so far, that’s it. Everyone is sitting around waiting for the game to reappear, and this is genuinely unlike anything I’ve seen in gaming.

So far as I can tell, across Twitch, YouTube and Mixer, there are at least a million viewers for Fortnite, with around 900,000 on Twitch alone, just watching other streamers watch the black hole.

On Twitch, it’s Fortnite legend Tfue who is naturally raking in the most views, 156,000, albeit he’s doing so with a misleading thumbnail that’s a photoshopped image of a fake season 11 map. Not that Tfue wouldn’t be getting this many viewers anyway, but I’m guessing it helps, as people click thinking he some how got early access. Checking back over to his stream as I write this and…he’s currently shotgunning a beer. Okay then.

On YouTube, Typical Gamer is actually beating out Tfue with 166,000 viewers, a significant percentage of his 8.66 million subscribers.

Why are so many people watching these streamers sit around doing nothing? Because one of the most popular games on earth has taken itself offline on purpose, and we have no idea of when it might be back other than staying tuned to this cryptic livestream.

There’s no countdown, nothing to indicate whether this is going to last 20 minutes or a full week. Leaker Lucas7Yoshi says that he found some code on Fortnite.com that says this may actually last until Tuesday morning at 6 AM, practically two full days from now. That’s not confirmation, but Epic is rolling out an entirely new map for Fortnite, and could be doing other things like making Save the World free-to-play, rumor has it, so who knows.

Two days would be a long time to sit around watching a stream, particularly one without a countdown, but I have a feeling that we will see more secret messages and changes to the black hole over time as Fortnite builds hype for its return. Coming back during a weekday when no one but streamers can play is a bit of a weird notion, but we’ll see what happens.

Stay tuned, this is not nearly over yet.

see also : When to secure a lawyer After an automobile accident