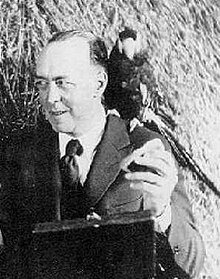 Who is Edgar Rice Burroughs?

Edgar Rice Burroughs (September 1, 1875 – March 19, 1950) was an American fiction writer best known for his celebrated and prolific output in the adventure and science-fiction genres. Among the most notable of his creations are the jungle man Tarzan, the heroic Mars adventurer John Carter and the fictional landmass within Earth known as Pellucidar. Burroughs’ California ranch is now the center of the Tarzana neighborhood in Los Angeles.

Burroughs was born on September 1, 1875, in Chicago, Illinois (he later lived for many years in the suburb of Oak Park), the fourth son of Major George Tyler Burroughs (1833–1913), a businessman and Civil War veteran, and his wife, Mary Evaline (Zieger) Burroughs (1840–1920). His middle name is from his paternal grandmother, Mary Coleman Rice Burroughs (1802-1889).

He was of almost entirely English ancestry, with a family line that had been in North America since the Colonial era.

Through his Rice grandmother, Burroughs was descended from settler Edmund Rice, one of the English Puritans who moved to Massachusetts Bay Colony in the early 17th Century. He once remarked, “I can trace my ancestry back to Deacon Edmund Rice.” The Burroughs side of the family was also of English origin and also emigrated to Massachusetts around the same time.

Many of his ancestors fought in the American Revolution. Some of his ancestors settled in Virginia during the colonial period, and Burroughs often emphasized his connection with that side of his family, seeing it as romantic and warlike, and, in fact, could have counted among his close cousins no less than seven signers of the Declaration of Independence, including his third cousin, four times removed, 2nd President of the United States John Adams.

Burroughs was educated at a number of local schools. He then attended Phillips Academy, in Andover, Massachusetts, and then the Michigan Military Academy. Graduating in 1895, and failing the entrance exam for the United States Military Academy at West Point, he became an enlisted soldier with the 7th U.S. Cavalry in Fort Grant, Arizona Territory. After being diagnosed with a heart problem and thus ineligible to serve, he was discharged in 1897.

Burroughs’s bookplate, showing Tarzan holding the planet Mars, surrounded by other characters from his stories and symbols relating to his personal interests and career

Typescript letter, with Tarzana Ranch letterhead, from Burroughs to Ruthven Deane, explaining the design and significance of his bookplate After his discharge, Burroughs worked a number of different jobs. During the Chicago influenza epidemic of 1891, he spent half a year at his brother’s ranch on the Raft River in Idaho, as a cowboy, drifted somewhat afterward, then worked at his father’s Chicago battery factory in 1899, marrying his childhood sweetheart, Emma Hulbert (1876–1944), in January 1900.

In 1903, Burroughs joined his brothers, Yale graduates George and Harry, who were, by then, prominent Pocatello area ranchers in southern Idaho, and partners in the Sweetser-Burroughs Mining Company, where he took on managing their ill-fated Snake River gold dredge, a classic bucket-line dredge.

The Burroughs brothers were also the sixth cousins, once removed, of famed miner Kate Rice, a brilliant and statuesque Maths professor who, in 1914, became the first female prospector in the Canadian North. Journalist and publisher C. Allen Thorndike Rice was also his third cousin.

When the new mine proved unsuccessful, the brothers secured for Burroughs a position with the Oregon Short Line Railroad in Salt Lake City. Burroughs resigned from the railroad in October 1904.

In a Paris Review interview, Ray Bradbury said of Burroughs that “Edgar Rice Burroughs never would have looked upon himself as a social mover and shaker with social obligations. But as it turns out – and I love to say it because it upsets everyone terribly – Burroughs is probably the most influential writer in the entire history of the world.”

Bradbury continued that “By giving romance and adventure to a whole generation of boys, Burroughs caused them to go out and decide to become special.”

In Something of Myself (published posthumously in 1937) Rudyard Kipling wrote: “My Jungle Books begat Zoos of them. But the genius of all the genii was one who wrote a series called Tarzan of the Apes. I read it, but regret I never saw it on the films, where it rages most successfully.

you can also read; Childhood, Biography & Facts of Clair Engle

He had ‘jazzed’ the motif of the Jungle Books and, I imagine, had thoroughly enjoyed himself. He was reported to have said that he wanted to find out how bad a book he could write and ‘get away with’, which is a legitimate ambition.” (Ch. 8, “Working Tools”).

By 1963, Floyd C. Gale of Galaxy Science Fiction wrote when discussing reprints of several Burroughs novels by Ace Books, “an entire generation has grown up inexplicably Burroughs-less”. He stated that most of the author’s books had been out of print for years and that only the “occasional laughable Tarzan film” reminded public of his fiction.

Gale reported his surprise that after two decades his books were again available, with Canaveral Press, Dover Publications, and Ballantine Books also reprinting them.

Galloway was identified by James Gunn as “one of the half-dozen finest Burroughs scholars in the world”; Galloway called Holtsmark his “most important predecessor.

After the war ended, Burroughs moved back to Encino, California, where after many health problems, he died of a heart attack on March 19, 1950, having written almost 80 novels. He is buried at Tarzana, California, US.

When he died, he was believed to have been the writer who had made the most from films, earning over $2 million in royalties from 27 Tarzan pictures.

The Science Fiction Hall of Fame inducted Burroughs in 2003.