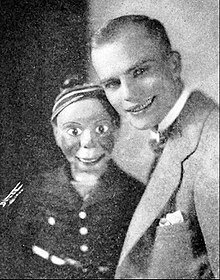 Who is Edgar Bergen?

Edgar John Bergen (born Edgar John Berggren, February 16, 1903 – September 30, 1978) was an American actor, comedian and radio performer, best known for his proficiency in ventriloquism and his characters Charlie McCarthy and Mortimer Snerd. He was also the father of actress Candice Bergen.

Edgar Bergen was born in Chicago, Illinois, one of five children and the youngest of two sons of Swedish immigrants Nilla Svensdotter (née Osberg) and Johan Henriksson Berggren.

He attended Lake View High School. After his father died, Edgar Bergen was just 16, he went out to work as an apprentice accountant, a furnace stoke, a player piano operator, and a projectionist in a silent-movie house. The famous ventriloquist Harry Lester was so impressed by Edgar Bergen that he gave the teenager almost daily lessons for three months in the fundamentals of ventriloquism.

In the fall of 1919, Edgar paid Chicago woodcarver Theodore Mack $36 to sculpt a likeness of a rascally red-headed Irish newspaperboy he knew. The head went on a dummy named Charlie McCarthy, which became Bergen’s lifelong sidekick.

Edgar Bergen had created the body himself, using a nine-inch length of broomstick for the backbone, and rubber bands and cords to control the lower jaw mechanism of the mouth.

For college he attended Northwestern University where he was enrolled in the pre-med program to please his mother. He switched to Speech & Drama but never completed his degree.

He gave his first public performance at Waveland Avenue Congregational Church located on the northeast corner of Waveland and Janssen. He lived across the street from the church.

In 1965, he gave the church a generous contribution, a thoughtful letter, and a photograph of himself which had been requested by the minister and was displayed in the church’s assembly room which was dedicated to Bergen. He cut out an “R” and a “G” from his family name and went from Berggren to Bergen on the showbills.

Between June 1922 and August 1925, he performed every summer on the professional Chautauqua circuit and at the Lyceum theater in Chicago. Edgar Bergen had an interest in aviation, becoming a private pilot.

In mid-September 1978 he announced that he was retiring after over 50 years in show business and sending his monocled, top-hatted partner, Charlie McCarthy, to the National Museum of American History at the Smithsonian Institution in Washington, D.C..

Bergen was interred with his parents (who are buried under their true surname of “Berggren”), in Inglewood Park Cemetery, Inglewood, California. Edgar Bergen’s wife of 33 years, Frances Westerman Bergen, died at Cedars-Sinai Medical Center in Los Angeles, on October 2, 2006, aged 84,

from undisclosed causes. She is also buried in Inglewood Cemetery. In 1990, Edgar Bergen was elected to the Radio Hall of Fame, the same year that The Charlie McCarthy Show was selected as an honored program.

A message in the closing credits dedicates The Muppet Movie (which featured Edgar and Charlie in their last screen appearance) to the memory and magic of Edgar. In 1991, the United States Postal Service honored him with a 29-cent commemorative stamp.