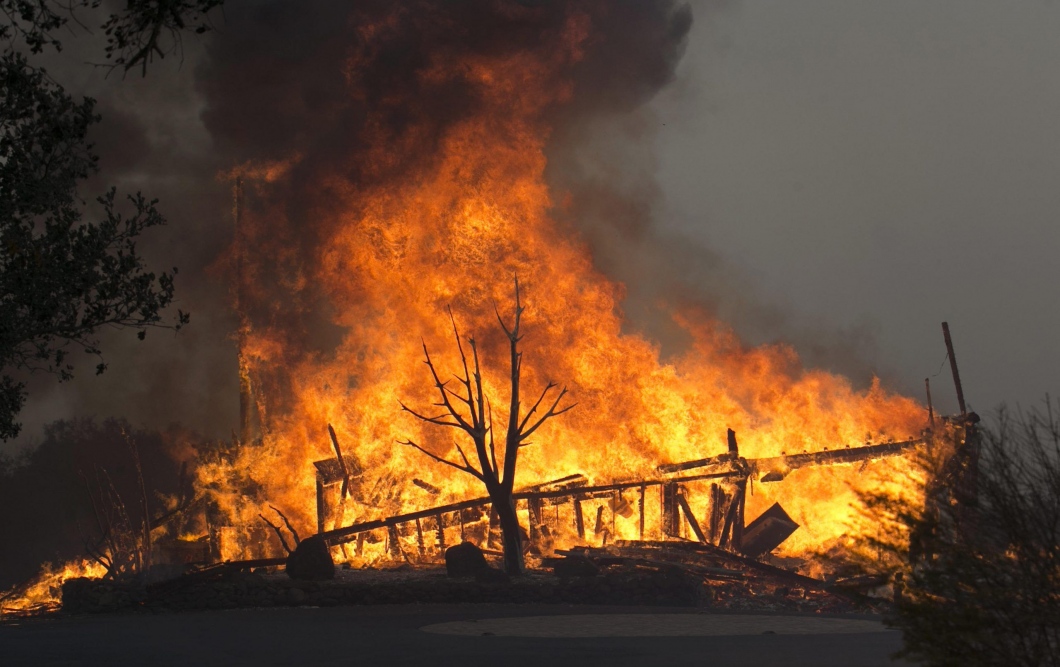 The Kincade fire began Wednesday night in Northern California and has charred more than 50,000 acres.

Fueled by powerful winds, the massive Kincade fire continued its southwest march across Sonoma County, burning winery propertiesand threatening to jump Highway 101 as more than 2 million people across the region were thrown into darkness because of Pacific Gas & Electric Co. blackouts.

Gov. Gavin Newsom declared a statewide emergency Sunday as wildfires spread throughout California. The Kincade fire had burned about 54,300 acres by Sunday night, forcing evacuations of more than 180,000 people. The blaze has destroyed 94 structures, damaged 17 and threatens an additional 80,000, officials said at a Sunday night briefing. The blaze is only 5% contained.

Map: Where wildfires are burning in California right now

“We are deploying every resource available, and are coordinating with numerous agencies,” Newsom said earlier. “It is critical that people in evacuation zones heed the warnings from officials and first responders.”

The Northern California fire crisis had prompted a massive mandatory evacuation footprint that stretched from the vineyards of Sonoma County to the coastal community of Bodega Bay, encompassing areas and cities including Windsor, Healdsburg, Sebastopol, Dry Creek Valley and parts of Santa Rosa.

Firefighters’ biggest overnight concern is that the fire will cross Highway 101 and ignite an area that hasn’t burned since the 1940s. Officials worry the blaze will spread into agricultural land mostly used to grow grapes and reach a dense mountainous region of old-growth redwood forest. The fire’s main edge was pushing south of the community of Windsor late Sunday night, where firefighters were defending structures.

“We are in the heart of the battle right now,” said Division Chief Jonathan Cox of the California Department of Forestry and Fire Protection. Residents who live outside the fire evacuation areas were told to be prepared to leave because “this fire could change directions at any moment.”

Only hours after that warning, the blaze surged south toward Santa Rosa and fire authorities were racing more resources to the area after midnight in the hopes of protecting homes. Sonoma County officials issued urgent announcements on social media ordering any residents who had not heeded evacuation orders to flee Larkfield-Wikiup, an unincorporated community of about 9,000 people. Officials told residents along Faught Road, south of Shiloh Road and north of Old Redwood Highway, to “leave now” as the fire continued on a fierce path.

The area in danger early Monday morning is a densely populated neighborhood of single-family tract homes and includes San Miguel Elementary School — and is about 19 miles south of where the Kincade fire began last Wednesday night in the Mayacama Mountains.

Beauty lies to the north

Larkfield-Wikiup was hit hard in the 2017 Tubbs fire, the second-most destructive in modern California history, which killed 22 people and destroyed more than 5,000 homes. Hundreds of homes were destroyed in the southeast section of Larkfield-Wikiup in the area of Mark West Springs Road and Old Redwood Highway.

More than 3,000 local, state and federal firefighting personnel were battling the Kincade fire. Two firefighters suffered burn injuries Sunday, one minor and the other more serious.

Blowtorch conditions exacerbated the fire fight on an extreme wind day that saw one gust of 96 mph and another of 85 mph in the fire zone.

Forecasters expected the Diablo wind event to persist through Monday morning, with wind gusts at the highest elevations around 70 mph, and gusts of about 40 mph to 45 mph in the lower elevations of the North Bay and East Bay hills. The desert air from Nevada and Utah pouring down slopes into Northern California is bringing incredibly dry air, lowering humidity levels to about 9%, fire officials said.

They hope a Monday afternoon respite from the strong winds will slow the fire’s spread and provide an opportunity for an aggressive attack before a new Diablo wind event is predicted to return Tuesday night — although it is not forecast to be as extreme as this weekend’s.

“The big fear now is Windsor, Healdsburg and holding the line on Highway 101 so we keep it on the east side,” said Newsom, who toured the area and visited hospitals and evacuation centers.

Structures in the famed wine country burned, including some owned by wineries in the Alexander Valley. The Soda Rock winery along Highway 128 near Healdsburg was consumed early Sunday morning.

PG&E customers struggling without electrical power could remain in the dark until Wednesday, utility spokeswoman Mayra Tostado said Sunday. The next outages will hit customers in Kern, Fresno and Madera counties, she said.

The blackouts started at 5 p.m. Saturday and will not end until the company determines the outage areas are free from dangerous wind conditions, she said.

Once the wind subsides, PG&E will send out thousands of electrical workers to visually inspect all the lines for possible damage. The utility warned that it could take up to 48 hours after the winds subside to complete the inspections and reenergize the lines.

Ryan Yeager, 39, used a charging station in Orinda to power medical equipment for his daughter, Violet, who uses a wheelchair. The city has been without power since Saturday night. He said she suffers from a disorder that requires a breathing device and a tube for nutrition.

Yeager ordered a $2,600 battery that was supposed to provide a few days of power, but it had not yet arrived. “I don’t mind this as long as we are not having to evacuate,” he said.

Evacuation centers were filled with fire refugees, many who left their homes in predawn darkness after sleepless hours listening to their phones ping with evacuation updates.

Rows of cots lined a giant room at Petaluma Veterans Memorial Hall. Evacuees were served a hot homestyle breakfast of pancakes, eggs and sausage links in an adjacent room.

Some watched the local news, as others filed in and out of the hallways, unsure of their next move. “I’m trying to figure out what’s going on,” one woman was overheard saying into the phone.

Windsor resident Eva Mendoza had packed only a few items, including a toothbrush and a change of clothes, before finding a place that would accept her cocker spaniel Natalia.

It was her 52nd birthday and she had plans to attend a concert in San Francisco. But then the evacuation orders came.

In her rush to vacate, she left pictures and mementos behind. “I didn’t have time to wrap anything else,” she said through tears.

Kayla Williams, 26, and her family ate lunch at the Santa Rosa Veterans Memorial Auditorium after leaving their Larkfield home.

They were told there is no room at the evacuation center, so the Williamses don’t know where they’ll go for the night. Williams kept her voice low, describing how her 4-year-old son asked her if they’re going to live in a car permanently. Both her sons have cried, begging to return home.

“I don’t know what to tell them. It’s hard when us as adults are panicking and are trying to stay calm for them,” Williams said.

In Santa Rosa, residents of neighborhoods that burned in the Tubbs fire in 2017 once again left their homes in darkness and uncertainty.

Karen Kristensen was packing up two cars for her 88-year-old mother, Beverly, and herself in Coffey Park.

They were caught in the Tubbs fire, which burned Coffey Park to the ground. Homes here are still under construction or brand new. Kristensen just moved back in August.

In 2017 they escaped with some laundry and a few pictures. “I wore shorts for two weeks,” she said. “Everything was dust. There was nothing left.”

Just north of Santa Rosa, Sharon Bowne was visibly anxious as she loaded her sport utility vehicle to evacuate her newly built duplex near the Fountaingrove neighborhood, where her home burned in the Tubbs fire. At her feet were boxes of neatly folded linens and an antique waffle maker that she didn’t want to part with. A bench with a needlepoint top wasn’t going to fit. Every inch of space was packed.

The evacuation order had just come down about an hour earlier, after darkness had fallen, and with the threat that the power would be cut any moment.

“I’ve already had my meltdown today,” she said. “They’re shutting it off and we only have two little flashlights.”

Just outside the Santa Rosa evacuation area, Chase Williamson, owner of Steele & Hops Public House, hung a sign announcing his commodities: “Please come in and hang out, charge your phones, use our WiFi, have some coffee or a bar beverage.”

Zack Darling, who works in the cannabis industry, and his girlfriend, Briona Hendren, a sculpture artist, drank mules at the bar after evacuating their home in the Hidden Valley neighborhood of Santa Rosa. Their two cars were packed to the brim.

As with so many in Santa Rosa, this wasn’t their first evacuation in the face of fire. They fled during the Tubbs fire, fortunate that their home survived.

“We’re making the best of it,” Darling said as he sipped his drink.

Firefighters were confronted with smaller blazes throughout the day.

In the East Bay, flames erupted near the Highway 24-Interstate 680 interchange in Contra Costa County, destroying a tennis club building and damaging other structures in Lafayette.

Another fast-moving fire erupted near the Carquinez Bridge, which connects Contra Costa County to Vallejo in Northern California, but firefighters gained the upper hand by the afternoon.

The cause of the Kincade fire is still under investigation, but some suspicion is already turning to transmission lines owned by PG&E. The utility said Thursday that one of its transmission lines experienced problems Wednesday night around the area where the fire broke out.

In a mandatory report sent to the California Public Utilities Commission, the company said one of its workers noticed that Cal Fire had taped off the area. PG&E said Cal Fire also pointed out a “broken jumper on the same tower.”