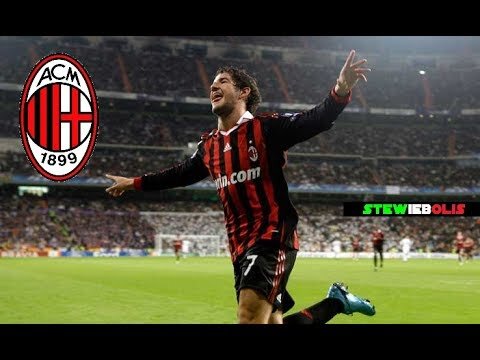 Who is Alexandre Pato?

In 2009, he scored 18 goals in 42 matches in all competitions, which earned him both the Golden Boy and Serie A Young Footballer of the Year awards. During the 2010–11 season, he helped Milan win the Serie A, where he was the club’s joint top scorer with 14 goals in 25 games.

In January 2013, Pato returned to Brazil signing for Corinthians for €15 million, where he won the Campeonato Paulista with the club. In 2014, Pato joined São Paulo on a two-year loan deal, where he went on to play 95 games, scoring 38 goals for the club. In January 2016, Pato transferred to English Premier League club Chelsea on a loan deal.

A full international for Brazil since 2008, Pato was part of their squads which won the 2009 FIFA Confederations Cup and competed at the 2011 Copa América. He also won two consecutive Olympic medals for the country, a bronze in 2008 and silver four years later.

In June 2006, at only age 16, Pato was signed by Sport Club Internacional to compete in the Campeonato Brasileiro Sub-20. Despite the fact that he was competing against players up to four years older than he was, Pato became top scorer of the competition as Internacional Sub-20 defeated Grêmio 4–0 in the championship’s final match.

Ready to join the Inter 13th team in November that same year, his debut finally happened at the Estádio Palestra Itália against São Paulo team Palmeiras for the Campeonato Brasileiro. Alexandre Pato met and surpassed any and all expectations of what was expected of him as he scored his first professional goal within the first minute of the game. The rest of his participation was spent dribbling and confusing defenders as he made two assists (and almost scoring another himself) to help Internacional rout Palmeiras 4–1. He was substituted off in the 77th minute.

Pato said in an interview with the Brazilian television program Esporte Espetacular that at age 11, he broke his arm and found a tumor in the arm and feared the arm needed to be amputated. His surgery to remove the tumor was successful and did not require an amputation.

In 2007, Pato was engaged to Brazilian actress Sthefany Brito. They mutually split up in January 2009. However, they got back together, and on 7 July 2009, they married in a ceremony at the Copacabana Palace in Rio de Janeiro. However, the marriage lasted less than ten months, and the couple divorced on 21 April 2010, with Brito citing Pato’s constant partying as the reason for their split. In 2010, he had a brief romance with Miss Brazil 2010, Débora Lyra.

Sometimes happiness is a feeling. Sometimes it’s a decision. pic.twitter.com/DRJnaXJIem

On 2 July 2013, after two-and-a-half years of relationship, Pato broke up with his girlfriend Barbara Berlusconi, a director of A.C. Milan and the daughter of club owner Silvio Berlusconi.

Pato was linked to Albanian actress and model, Almeda Abazi. From the end of 2014, Pato began dating Brazilian actress, model and television presenter Fiorella Mattheis. They separated on 4 July 2017 following a Twitter announcement.

A quick, agile and creative forward with excellent technical ability and an eye for goal, Pato was considered to be one of the world’s most promising young footballing stars in his youth; his former managers Dunga and Carlo Ancelotti likened his ability to that of other legendary Brazilian attacking players, such as Careca, Kaká, Romário and Ronaldo

Alexandre Pato is a Brazilian football player with has an estimated net worth of $145 million. Alexandre Pato started his career at the age of 16 when he was signed up by the Sport Club Internacional to compete for the Campeonato Brasileiro Sub 20.