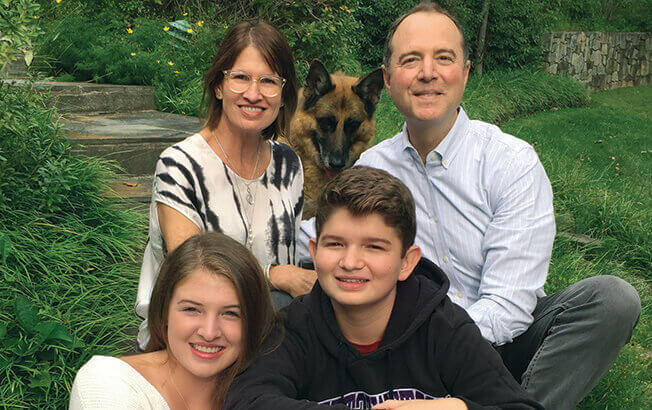 Who is Adam Schiff?

Adam Schiff is an American born Democratic  representative from California’s 28th Congressional District in the U.S. House. He was elected to the office on November 7, 2000.

Prior to his career in the U.S. House, Schiff served in the California State Senate from 1996 to 2001.

Schiff was considered a potential candidate for the U.S. Senate seat being vacated by Barbara Boxer in 2016. However, he announced on May 12, 2015, that he would stay out of the race.

Based on analysis of multiple outside rankings, Schiff is an average Democratic member of Congress, meaning he will vote with the Democratic Party on the majority of bills.

In 2015, Schiff supported the Saudi Arabian-led intervention in Yemen, saying: “The military action by Saudi Arabia and its partners was necessitated by the illegal action of the Houthi rebels and their Iranian backers. … But ultimately, a negotiated end to this crisis is the only way to restore order in Yemen and shrink the space for terrorism.

Adam Schiff called North Korea “one of the most brutal and despotic regimes in the world.” After the death of American student Otto Warmbier who had been imprisoned during a visit to North Korea, Schiff said: “The barbaric treatment of Otto Warmbier by the North Korean regime amounts to the murder of a U.S. citizen.”

In April 2018, asked whether he thought Trump deserved at least partial credit for North Korea’s involvement in talks with the US, Schiff responded: “I think it’s more than fair to say that the combination of the president’s unpredictability and indeed, his bellicosity had something to do with the North Koreans deciding to come to the negotiating table.”

Adam Schiff is a supporter of Israel. In December 2016, Schiff urged President Obama to veto UN Security Council Resolution 2334, which condemned Israeli settlement building in the occupied Palestinian territories as a violation of international law.

In February 2019, Rep. Ilhan Omar tweeted, “It’s all about the Benjamins baby” in reference to American politicians’ support for Israel and invoked the American Israel Public Affairs Committee (AIPAC). Many Democratic leaders—including Schiff—condemned the tweet, which was interpreted as implying that money was fueling American politicians’ support of Israel. Schiff said it was “never acceptable to give voice to, or repeat, anti-Semitic smears.”

After news reports that the CIA concluded that Saudi Crown Prince Mohammed bin Salman had ordered the assassination of Saudi journalist Jamal Khashoggi, Trump said there was insufficient CIA evidence to link bin Salman to the murder. Adam Schiff, the top Democrat on the House intelligence committee, was briefed by the CIA on the agency assessment, and stated afterwards that Trump was being dishonest about the CIA findings.

Adam Schiff net worth also puts him at 21st among all the members from California. (For some reason, the LA Times estimated his net worth as much, much lower, with a minimum net worth of $267,000 in 2014, which would make him the 309th wealthiest member of Congress.) Interestingly, his estimated net worth took a dip in 2008 before starting to grow again.

Even more interesting is that Open Secrets estimates his net worth in 2016 took a big dive, and places it at $692,011. This may be some kind of technical glitch, as you can see from the assets mentioned below, but it’s unclear.

Trump Called For Rep. Adam Schiff To Be Arrested For Treason

Trump began by attacking Schiff’s character and stature (calling him “corrupt” and “liddle”), but in recent days has accused the California Democrat of treason.

He tweeted Sunday, “I want Schiff questioned at the highest level for Fraud & Treason,” and following that Monday with a tweet reading, “Adam Schiff illegally made up a FAKE & terrible statement, pretended it to be mine as the most important part of my call to the Ukrainian President … Arrest for Treason?”

Schiff, who chairs the House Intelligence Committee, one of the panels leading the impeachment inquiry into Trump, arguably made a misstep by summarizing the president’s statements at an open hearing in a dramatic fashion. Schiff’s critics — including the president — claim his summary wasn’t just unfair, but completely false.

Despite this, he is is no danger of being arrested for treason, because he did not commit it as the Constitution defines it — namely, waging war against the United States or aiding one of the country’s enemies.

Below is an abbreviated outline of Schiff’s academic, professional, and political career

Outside of political life, Schiff worked as an attorney.

At the beginning of the 116th Congress, Schiff was assigned to the following committees

At the beginning of the 115th Congress, Schiff was assigned to the following committees

Schiff served on the following committees

Schiff served on the following committees