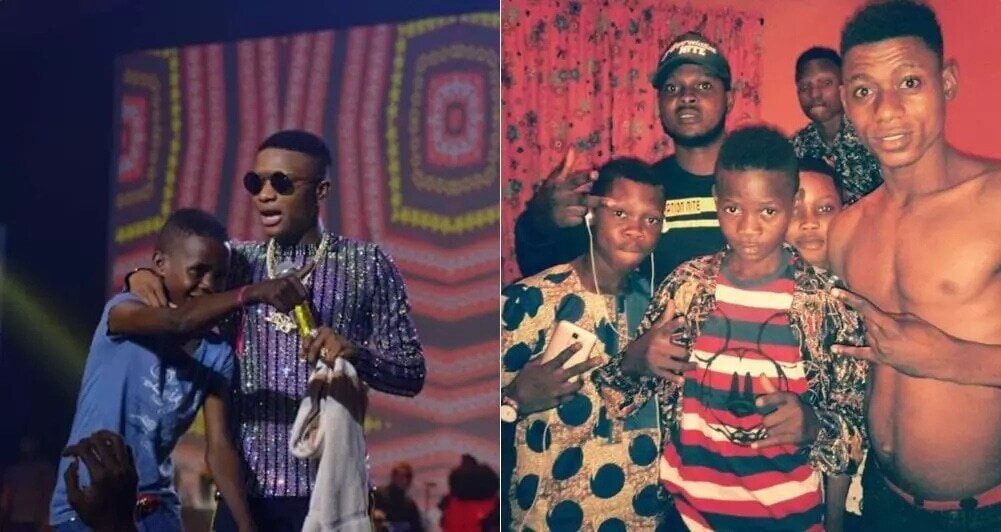 He started recording music at age 11 and managed to release a collaborative album with the Glorious Five, a group he and a couple of his church friends formed. In 2009, he signed a record deal with Banky W.’s record label Empire Mates Entertainment (E.M.E). He rose to prominence in 2010 with the release of the song “Holla at Your Boy” from his debut studio album, Superstar (2011).

“Tease Me/Bad Guys”, “Don’t Dull”, “Love My Baby”, “Pakurumo” and “Oluwa Lo Ni” were also released as singles from the Superstar album. Wizkid’s self-titled second studio album, Ayo, was released in September 2014 and was preceded by six singles: “Jaiye Jaiye”, “On Top Your Matter”, “One Question”, “Joy”, “Bombay” and “Show You the Money”.

In 2016, Wizkid achieved international recognition following his collaboration with Drake on the global hit, “One Dance”, which reached number one in 15 countries, including the United States, United Kingdom, Canada and Australia.

In addition to his solo work, Wizkid has collaborated with several other artists and was featured on the hits “Girl” (with Bracket), “Fine Lady” (with Lynxxx), “Sexy Mama” (with Iyanya), “Slow Down” (with R2Bees), “The Matter” (with Maleek Berry), “Pull Over” (with KCee) and “Bad Girl” (with Jesse Jagz).

Following the release of his second studio album and expiration of his 5-year recording contract, Wizkid left E.M.E. On 1 March 2017, Billboard magazine reported that Wizkid signed a multi-album deal with RCA Records.[5] The deal was first reported by several media outlets in September 2016.

The chairman and CEO of RCA Records, Peter Edge, somewhat confirmed the signing while speaking to Music Business Worldwide in January 2017.

He was ranked 5th on Forbes and Channel O’s 2013 list of the Top 10 Richest/Bankable African Artists. In February 2014, Wizkid became the first ever Nigerian musician to have over 1 million followers on Twitter.

Moreover, he became the first Afrobeats artist to appeared in the 2018 Guinness World Records for his contribution to Drake’s hit song “One Dance.

Wizkid was born on 16 July 1990 in Surulere, a residential and commercial area of Lagos. He grew up in an interfaith household with twelve female siblings. His mother is a Pentecostal Christian and his father practices Islam.

Wizkid and Sophie Rammal were an item during his early days. She was also featured in his hit single, “Holla at your boy.

In a 2012 radio interview with Tim Westwood, he said that his father has three wives.  During his upbringing, he listened to songs recorded by King Sunny Ade, Fela Kuti, and Bob Marley. Wizkid started singing at age 11 and went by the stage name Lil Prinz until 2006. During an interview with Adesope of Factory 78 TV, Wizkid described his life in a nutshell.

He said he formed a group called the Glorious Five with a couple of his church friends. The group managed to release an album prior to disbanding. Wizkid later met OJB Jezreel, a record producer who prevented him from recording for a year.[18] While visiting OJB’s PointBeat Studios frequently, he watched 2 Face Idibia record songs for his Grass 2 Grace album.

He was also present during the recording sessions for Sound Sultan’s debut album, Jagbajantis. Wizkid cited Naeto C as one of the people who mentored and coached him when he was 15 years old. Wizkid also told Factory 78 TV that his parents weren’t receptive of his music from the onset.

In order to gain his father’s trust, he had to work hard and spend lots of time in the studio. Wizkid co-wrote Banky W’s “Omoge You Too Much”, a song off The W Experience album. He also worked with Naeto C, OJB Jezreel, Ikechukwu, and M.I while developing his craft. In 2009, Wizkid inked a record deal with Banky W.’s Empire Mates Entertainment.

In mid-2009, he dropped out of Lagos State University (LASU) to focus on his craft. He later attended Lead City University, but dropped out after completing two sessions.

In 2012, Wizkid signed a one-year endorsement deal with Pepsi reportedly worth 350,000 U.S dollars. He travelled to Beirut, Lebanon with Tiwa Savage for a Pepsi commercial shoot. On 28 May 2013, Premium Times reported that Wizkid signed a one-year deal with MTN Nigeria. Moreover, the news source reported that Wizkid’s Pepsi contract was renewed for another two years.

On 23 October 2013, BellaNaija reported that Wizkid signed an endorsement deal with Guinness for the “Guinness World of More” concert, which was held at the Eko Convention Centre of the Eko Hotel and Suites in Victoria Island, Lagos on 3 November 2013. On 18 June 2015, Pulse reported that Wizkid ditched MTN and signed a ₦128 million deal with GLO.

Wizkid and Maleek Berry’s work credits include “Lagos to Soweto” and “The Matter”, among others. On 29 April 2013, Premium Times reported that Wizkid signed producers Uzezi Oniko and Okiemute Oniko, popularly known as Legendury Beatz, to his imprint. He made the announcement via Twitter.

On 9 May 2013, he unveiled photos of himself with the aforementioned acts signed. On 20 August 2013, Wizkid signed recording artist L.A.X to the label. He made the announcement moments after debuting the music video for “Caro”, the label’s first official single. On May 7, 2016, Wizkid announced the signings of Efya, R2Bees, and Mr Eazi to Starboy Entertainment. He made the announcement shortly after his performance at the 17th edition of the Ghana Music Awards.

After Wizkid tweeted a subliminal message and tweaked his Twitter account, reports about his departure from E.M.E went viral. Wizkid moved out of the E.M.E mansion in Lagos and acquired his own home in the Lekki Phase 1 area. Prior to Wizkid’s subliminal tweets, Banky W pacified fans by assuring them that nothing was amiss. Furthermore, it was reported that troubles within E.M.E started as early as the 2012 E.M.E all stars concert.

After firing Osagie and hiring Godwin Tom (whom he parted ways with in April 2014, Wizkid wanted a 50–50 share with Banky W. The source revealed that Banky W refused to accept Wizkid’s proposal. Moreover, it was reported that Banky W wanted to find a manager for Wizkid who would accept 25 percent.

It was also reported that things started getting sour as a result of both parties disagreement. Information Nigeria went on to report that Wizkid was doing three shows weekly and bringing in close to ₦24 million monthly. On 30 April 2013, Nigerian Entertainment Today reported that Wizkid and E.M.E reunited after contract negotiations.

The news source also reported that Wizkid performed alongside label mates Shaydee and DJ Xclusive in The Republic of Benin. In August 2014, Wizkid told Olisa Adibua that he will depart the label following the release of his second studio album, Ayo.

On 15 June 2013, Wizkid was involved in a non-life-threatening car accident along the Lekki-Epe Expressway in Lekki, Lagos. According to an article posted on Silverbird Television, Wizkid was hospitalised for a minor concussion resulting from the wreck. According to eyewitness reports compiled by MTV Base, Wizkid’s Porsche Panamera was spotted speeding down the road; the car’s front tires blew out and resulted in the driver of the vehicle losing control and crashing into a road barrier.

Eyewitness reports also added that the car’s airbag suspension system deployed on impact, shielding Wizkid and the driver instantaneously. At the time of the incident, Wizkid and other passengers in the car were returning from the Soundcity Nokia LumiaBeat Party. The accident allegedly occurred around 3:30am in front of the GET Arena. As a result of the wreck, the car was badly damaged.

Pictures of the damaged vehicle surfaced on Instagram and Facebook. Vanguard reported that Wizkid acquired a Porsche Cayenne two weeks after the accident. He posted pictures of his new acquisition onto his Instagram page and tagged the pictures with the caption “#Blessed”.

Moreover, the news source added that multiple sources familiar with the “baby mama” and her family told them that they knew about the relationship between both parties. When the story broke out, close friends and associates of Wizkid didn’t confirm the story due to DNA results that were pending at the time.

Wizkid broke his silence on the story in several interviews. In an interview with a Nigerian Entertainment Today editor, Wizkid denied having a child. In another interview held at Ogudu-GRA in Lagos, Wizkid said he really doesn’t want to find himself in that peculiar situation.

A week before denying the aforementioned allegations, Wizkid tweeted from his official Twitter handle.[98] In December 2012, he denied the baby scandal during an interview with Nonye Ben-Nwankwo of The Punch. In October 2013, Wizkid uploaded a picture of he and his 2-year-old son, Boluwatife Balogun, onto his Instagram account.

The photo confirmed the alleged rumours and allegations that were harboured for 2 years. The photo also vindicated Nigerian Entertainment Today, the news source that first covered the story.

He also has two other boys from two different women, making him a Father of Three boys.

A victim of impersonation

On 19 June 2013, Wizkid and his management were questioned by men from the Nigeria Police Force. Duping charges were leveled against them by a group of UNILAG students. The students claimed that Wizkid agreed to perform at the UNILAG Sports Centre on 21 May 2013 for a total sum of ₦500,000. They also claimed that he didn’t show up for the show and didn’t return their money.

After conducting a thorough investigation, Police determined that Unilag students were bamboozled by con artists pretending to be affiliates of E.M.E. In the aforementioned interview with Showtime Celebrity, Wizkid commented on the events that transpired after the accusations. He told the media that the police were investigating the case.The masterminds behind the impersonation were later detained by law enforcement agents in Lagos.

In addition to duping Unilag students, the culprits set up fake email and social media accounts. Wizkid also elaborated on how one can go about booking him.

He got nominated six (6) categories of the 2017 Sound city award and won the ‘Digital Artiste of the Year’.