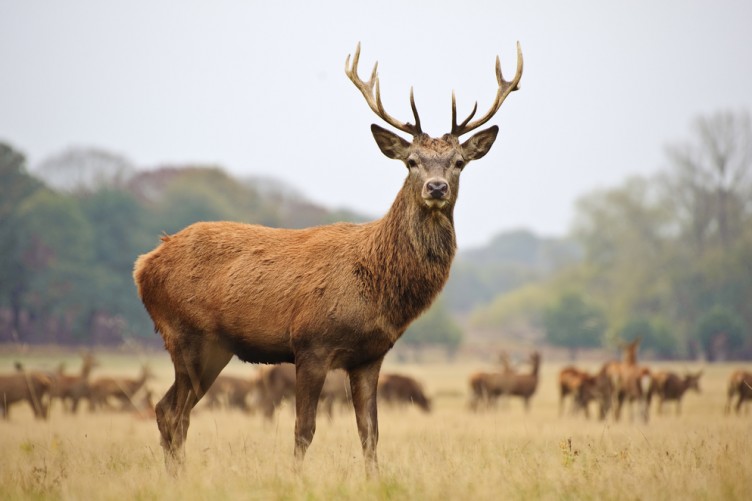 The antler growing process is one of Mother Nature’s most impressive feats and it’s in full-swing throughout Michigan. From a biological perspective, antler growth is a fairly complicated process that begins in early spring, peaks in mid summer, and winds to a stop sometime in august. Here’s a basic rundown of the complete process and what you can expect to see as bucks racks take shape throughout the summer.

Early Antler Growth in the Spring

Spring is the season of renewal for most wildlife, deer included. After enduring a long winter with little food, spring sparks the regeneration of the deer herd. Fat is stored for the first time in several months, a new crop of fawns are born, and winter coats are shed for lighter, brighter summer versions, but each of these pale in comparison to antler growth. Between late March and early September bucks will completely grow a new set of antlers. In the largest bucks this can be in excess of 170 inches of newly developed bone in less than five months.

To help explain how dramatic the antler development process is, Bill Armstrong, a Texas Parks and Wildlife biologist, came up with an easy to grasp equivalent. “That’s like you cutting off both your legs and growing them back in three months,” he said in a Texas Parks and Wildlife report.  Antler growth, like any natural process, is fraught with variables. Genetics, age, and nutrition all play pivotal roles in determining how much antler a buck will grow during the five-month antler growing season.

In Michigan, there is another factor that plays an important role. The severity of the previous winter often determines how impressive a bucks fall antlers will be. “Deer have to devote a lot of energy to rebuilding their bodies and getting healthy after hard winters,” said Brian Mastenbrook, wildlife biologist with the Michigan Department of Natural Resources. “Following tough winters, it takes them longer to get into the antler growing process and we usually see smaller racks the following year.”

While the finished product garners the most attention, the physical changes bucks endure while sprouting antlers are equally impressive and start shortly after the previous set of antlers is dropped. It all starts with a change in the amount of daylight, which biologists refer to as photoperiod.  As the days lengthen and spring approaches, a biological alarm goes off within each buck, signaling the beginning of antler production. Once this alarm goes off, bucks are in for a physical roller coaster ride until the antler development process draws to a close in late summer.

The two main mineral ingredients in antler are calcium and phosphorus, but these minerals are rarely consumed in the quantities necessary for antler growth, explained Armstrong. The only way antlers can be supplied with enough calcium and phosphorus is if they steal it from other parts of the skeleton.   During this process, a buck’s bone density can decrease by as much as 30 percent. Antler growth is sluggish initially, mostly due the dietary demands of recovering from winter and growing a new summer coat.  As spring progresses, hair growth and antler growth compete for the same nutrients.  According to a University of Georgia study, developing antlers are comprised of 80 percent protein by weight, the same nutrient that forms hair.

This competition is short-lived through. Once bucks’ winter coats are fully replaced with summer versions, antlers start developing quickly. As June gives way to July, antler growth is kicked into high gear.  “At peak periods as much as ½ inch of antler can be added to each tine in a single day,” said Mastenbrook. By the time mid-July hits, older age-class bucks will be sporting a basic version of the rack they will be carrying come fall. While tines and beams will get longer and mass will increase, in is unlikely that a buck will add tines during the last month and a half of the growth process. As antler growth continues through the end of summer so do buck’s voracious appetites.

During the summer and early fall, when food is plentiful and the rut is not distracting them, bucks will each as much as seven pounds of food per day, fueling their antler development.  During this development process, antlers are encased in a soft, blood-rich covering called velvet. This antler skin gets in name from its texture and appearance, which is remarkably similar to velvet fabric. 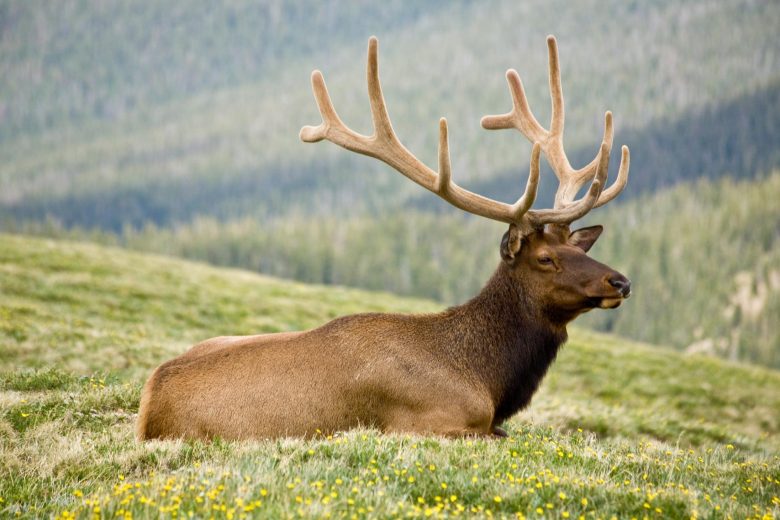 This Bbuck is Starting to rub Away and Lose Velvet

The softness of the velvet is indicative of the condition of the developing antlers underneath.   “During the growth period, antlers are very fragile and bucks carry them tenderly,” Mastenbrook explained. “Antlers can actually be sheared off if bucks catch them on a barb-wire fence or something like that.”  Damaging an antler during the summer will severely hamper antler development for that year, and will often have detrimental effects on antler development in upcoming years, according to Armstrong.  This is one reason that bucks are very passive during the summer. Any confrontation could result in a lost or deformed antler.

Once September hits, antler growth is complete and with that comes a physical and psychological transformation. In a period of 24-hours bucks antlers will go from being completely velvet covered to clean and polished.  As the days become shorter, velvet shedding is sparked by a large increase in testosterone, which stops the blood supply to the velvet, Mastenbrook noted. Once the velvet is dead, bucks will remove it by rubbing on bushes, weeds, trees, almost anything.  The end of antler development signals the start of sperm production, sending bucks’ focus from feeding to preparing for the breeding season.

For the next few months bucks will eat little while chasing does during the annual breeding phase. Meanwhile the days will become progressively shorter, leading into the dead of winter. Once the amount of daylight diminishes to certain level, hormone levels will change and bucks will drop their antlers, starting the entire, amazing process all over again.

Daniel Carter is an exprienced hunter who shares his knowledge and tips at HuntingExpert.Org. If you would like to read more articles about Hunting, feel free to visit the website.