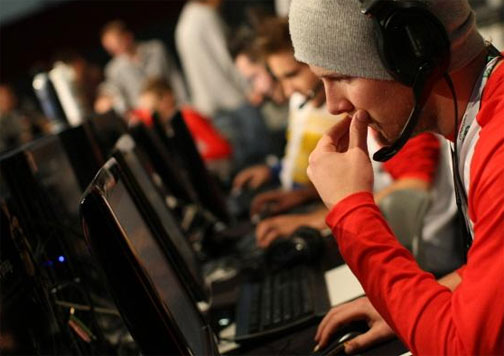 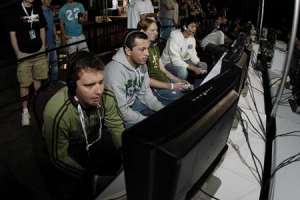 In the midst of the Olympics, one of the major discussions going on in the gaming world is whether gamers are athletes. After all, hardcore gamers train for hours each day, compete in major international events, and even have to meet some physical requirements to maintain endurance. The way I see it, if ESPN will play poker tournaments, it isn’t much more of a stretch to have them play video game tournaments, too. And given the name of the network, that makes gaming a sport. But let’s take a step back first and see how gaming has managed to rocket itself into the spotlight.
Casual Console Gaming
To get a true look at the evolution of gaming, we have to go back. Yes, I’m talking about Spacewar! and Pong. Back in the day, moving a paddle up and down to hit a tiny ball of light or navigating a spaceship around a screen was as good as it got. The shocking thing is, though, that people loved it! It launched a revolution that went through all of the casual console games, like Space Invaders, Frogger and Pac-Man. Although all of these were fun, it was rare that they would suck users in to the point of addiction.

Gaming Becomes a Lifestyle
Gaming really took off in the 1980s when most of the series we know today began. The Legend of Zelda and Final Fantasy are two prime examples. It’s these engrossing games that wrap the player up in a completely different world that have led to hardcore gamers. Some people play games like StarCraft for the vast majority of their time, often belonging to professional leagues and living with team members. World gaming championships provide an arena for gamers to compete against top players in the world and come home with the title.
The lifestyle isn’t all fun and games, though. Families of gamers are often concerned about the amount of time they spend playing, citing gaming as an addiction. Treatment centers exist, particularly in countries like South Korea where gaming addictions are common. The problem is that gaming can take players’ minds out of real life and into a fantasy world, blurring the lines between fantasy and reality and causing players to neglect reality in favor of fantasy.
Mobile Gaming: Casual Gaming Takes Off Again
The Game Boy was the first form of handheld gaming, but there’s a new wave of it sweeping the world in the form of mobile gaming. The industry’s annual profits are hovering around $8 million, which is half of what the gambling industry earns. Mobile gaming is taking off largely because it’s accessible, with millions of people downloading free or inexpensive games to smartphones and tablets. The games let players pit themselves against friends and purchase in-game perks to improve performance, both of which drive sales and playing time.
Games appeal to people’s desire to succeed and competitive nature, both of which are huge draws for the gaming industry. With the advances seen in the last couple of decades, it’s hard to imagine how much more engrossing gaming may become in the future. Developers will continue to push to create better games that capture the imagination and attention of people around the world.