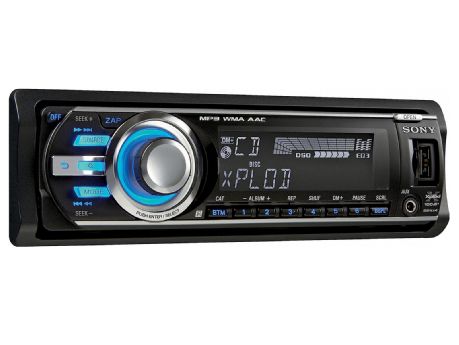 The structure of the menu and interface is so easy to navigate that finding songs or whichever function the user may be on is not a problem for the user.Weighing 4 pounds, it is offered on a one year warranty for the item.
Among its the key features of the Sony Xplod CD receiver is that it has a display that has easy-to-read single line LCD display with clock, station I’d. It also has the ability to display the track data when it is playing from digital MP3/WMA and even files from the Internet or on the CD drive. There is also key illumination which helps the quick location of buttons and this is essential for drivers as there are serious safety concerns where driving and stereo adjustments are concerned.
In terms of connections, the Xpl?d has a detachable face with a front auxiliary input which allows for connecting to most any portable devices in the car’s sound system. An RCA output for external amplifiers is able to allow the car’s sound system to be expanded. This is a feature which entertainment fanatics will appreciate as the user might intend to make major modifications in the future.
The Sony Xpl?d is a good merger of existing and emerging technologies. It can play CDs, CD-Rs and CD-RWs which are being overtaken by later formats. The Xpl?d is able to read these discs even if these contain MP3 and WMA files, the Xpl?d can read these files.
It has satellite radio control modules are also included and these give options for expanding the unit’s functionality.
It has a Radio Data System (RDS) capability which displays radio broadcast information such as artist and track information when the radio is stationed on compatible AM/FM bands. Also, with radio stations with the capability, this RDS feature allows for channel playback.
The Xpl?d’s CDX-GT250MP is able to delivery up to 52 watts of power to all the four speakers and it further enhances the sound levels with 280 watts of total power. Its 3 band EQ3 gives the owner the opportunity to customize sound with dB adjustments.