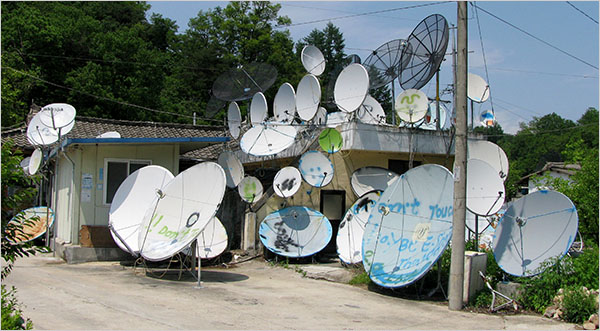 Satellite dishes may no longer be a cutting edge technology for home entertainment medium. In urban areas, many households are using fiber optics to get their high definition TV channels. However, in rural areas; satellite dishes can be the only option for people. With these dishes, people could pick up signals directly from the satellite. These dishes could also be configured to obtain signals directly from local TV stations. Without satellite dishes, it would be lucky for people to get NBC, CBS, ABC and PBS using standard antenna. Many small towns already have cable TV services, but disconnected villages and houses could only have electricity connection, with no water and gas utility services. Local channels may also offer limited entertainment values. They may provide only community notices and classified advertisements for most of the day. Fortunately, satellite coverage could be quite wide, especially if the satellites are located on geostationary orbit above specific countries. This will ensure steady connection on a greater area within a region.

Latest satellite dishes are quite compact and only a few feet in diameter. So, it would not present a major damage during a windstorm, After properly installing the satellite dish, there are possibly dozens or even hundreds of channels that we can access. This could boost the entertainment value inside the house. Because the dish is directly connected to the satellite, there should be no reception issues. There are different satellite dish providers in each country, but in the United States, there are Direct TV and DISH Network. It may be a problem to ask for someone to install a satellite dish, if our house is far even from the nearest small town. However, with some extra fees, it should be possible to get the dish set up and properly configured. With so many options available, people shouldn’t wonder whether they should switch to satellite dish from antenna, especially in rural areas. Depending on the packages, it is possible to have hundreds of possible TV channels that we can access. We should be able to watch anything from movies to educational programs.

Satellite dishes should be quite easy to install and it could be placed in many areas. The system also has embedded programming that can be controlled easily using the remote control. In its simplest form, a satellite dish configuration is consisted of a small parabolic receiver antenna, some cables and a decoding/processing equipment placed near the TV. Because the satellite is located in geostationary orbit, it will remain static above the region. It means that the satellite can have fixed orientation towards specific points towards the sky. Mounting the satellite dish should be an easy matter and we should be able to deal with local obstructions. It may only need four screws to hold the dish in the proper place. We should inform the technician if our house is occasionally exposed to heavy wind. In this case, we should make sure that the dish should be placed in a more protected area. It may also need to be better reinforced with extra screws on a sturdy surface, like concrete roof.