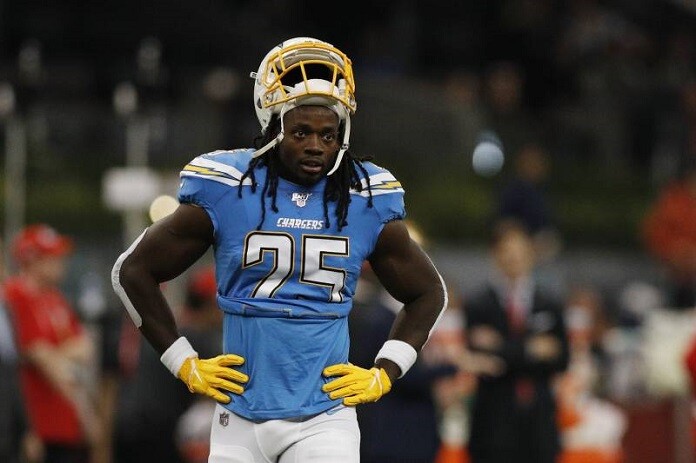 Who is Melvin Gordon?

Melvin Gordon III is an American born professional football running back for the Los Angeles Chargers of the National Football League (NFL). He was born April 13, 1993, He played college football at Wisconsin, and was drafted by the Chargers in the first round of the 2015 NFL Draft.

Gordon briefly held the NCAA Division I FBS single-game rushing yards record with 408 yards, set playing in three quarters against Nebraska in November 2014, until it was broken the following week by Oklahoma Sooners running back Samaje Perine against Kansas with 427 yards. He became the second all-time single-season rusher in FBS history with 2,587 yards, falling 41 yards shy of Barry Sanders record of 2,628 yards set in 1988.

Gordon attended Mary D. Bradford High School in Kenosha, Wisconsin, where he was a two-sport star for the Red Devils in both football and track. In football, he tallied 1,098 yards and 11 scores on 99 carries, and had five receiving touchdowns, and was an honorable mention All-state and All-region by the Wisconsin Football Coaches Association (WFCA) as a junior.

He was a first-team All-state selection by the Associated Press and the WFCA as a senior, after he rushed for 2,009 yards with 38 touchdowns. He was the Wisconsin Gatorade Football Player of the Year. Gordon’s played on the same team as cornerback Trae Waynes, who was drafted four spots ahead of Gordon in the 2015 NFL Draft by the Minnesota Vikings.

As an outstanding track & field athlete, Melvin Gordon was one of the state’s top performers in the long jump. At the 2011 Racine Invitational event, he ran the 55-meter dash in a PR 6.39 seconds on his way to a first-place finish.

He earned a second-place finish in the 100-meter dash at the 2011 SEC Outdoor Conference, recording a career-best time of 10.95 seconds.

At the 2011 WIAA Track & Field State Championships, he took silver in the long jump event after posting a career-best leap of 7.20 meters (23 ft 7 in).

Regarded as a four-star recruit by the Rivals.com recruiting service, Gordon was ranked the No. 24 running back in the nation. He was ranked the top player in Wisconsin by ESPN.com. He chose Wisconsin over scholarship offers from Iowa, Louisville, and Michigan. Gordon originally committed to the University of Iowa but de-committed and chose the University of Wisconsin–Madison instead.

Melvin Gordon attended the University of Wisconsin-Madison, where he played for the Wisconsin Badgers football team from 2011 through 2014 under head coaches Bret Bielema, Barry Alvarez, and Gary Andersen.

Melvin Gordon is the only running back in the NFL to earn an 80.0-plus grade when carrying the football against a defense with eight or more men in the box.https://t.co/DnjF3mBDVO pic.twitter.com/HnR2E3owii

As a freshman in 2011, Gordon played in three games rushing 20 times for 98 yards with a touchdown. He rushed for his first career collegiate touchdown against South Dakota on September 24. Melvin Gordon was given a medical redshirt after suffering a groin injury.

After the end of the 2014 college football season, Melvin Gordon prepared for the NFL Combine at EXOS San Diego in Carlsbad based on his former Wisconsin teammate, Jared Abbrederis’s recommendation.

At the 2015 NFL Combine, Gordon set a new record for the 60-yard shuttle with 11.0 seconds. However, the record was then broken by Byron Jones who had a time of 10.98 seconds.

The San Diego Chargers selected Gordon in the first round with the 15th overall pick.[56] In addition, he was one of two Wisconsin Badgers to be selected that year.

In February 2019, Gordon changed his jersey number from 28 to 25. He wore 25 throughout his collegiate career with the Wisconsin Badgers.

Los Angeles running back Melvin Gordon has informed the Chargers that unless he receives a new contract, he will not report to training camp and he will demand a trade, his agent Fletcher Smith told ESPN.

On July 13, 2019, Gordon told the Chargers that if he did not receive a new contract, he would demand to be traded and skip training camp. His goal in staging a holdout was to make as much money as fellow running backs Todd Gurley, David Johnson, and Le’Veon Bell. Gordon stated that “I know my value. I know what I bring to this team, and I’m sticking with that.”

On July 16, 2019, Melvin Gordon stated that “I want to end up with the Chargers, I mean, that’s my home. I’m not going to sit here and be like, I don’t want to go back to the Chargers. That’s the team who blessed me with an opportunity. They changed my life. Out of all 32 teams, that was the team that called. I can’t forget them for that.”

Gordon continued his holdout into the regular season after the Chargers did not trade him and Ezekiel Elliot was made the NFL’s highest paid running back. However, he will return to the team in week 4 of the NFL season in order to fulfill his years’ obligation of employment.