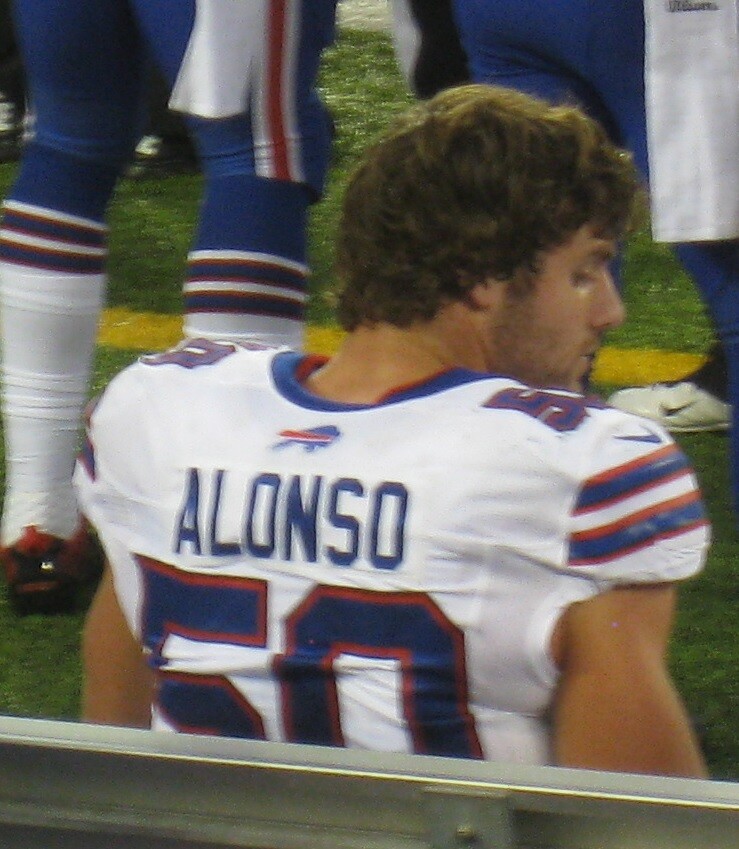 Who is Kiko Alonso?

Kiko Alonso is a professional American football player (born August 14, 1990) who plays for the Miami Dolphins of the National Football League (NFL). He played college football at Oregon, and was drafted by the Buffalo Bills in the second round of the 2013 NFL Draft.

Alonso was born in Newton, Massachusetts. His father, Carlos Alonso, was born in Cuba and raised in Puerto Rico. His mother, Monica Alonso, is from Colombia. Kiko has an older brother Carlos Alonso and a younger brother Lucas. Kiko attended Los Gatos High School in Los Gatos, California. He led the De Anza League and Central Coast Section in tackles his senior year with 150 stops (81 unassisted).

Kiko Alonso also tallied double figures in tackles in 10 of 12 games, finished third on the team in quarterback sacks, and led the Wildcats in receiving (35 catches, 559 yards). He led Central Coast’s sixth-ranked team to the league title (10–1–1) in 2007, with its lone loss his final year coming against Gilroy (40–34) in the sectional semifinals.

Alonso attended the University of Oregon, where he played for the Oregon Ducks football team from 2008 to 2012. After redshirting in 2008, he spent the 2009 season as Oregon’s primary reserve middle linebacker. He appeared in the final twelve games, accumulating 13 of his 16 tackles unassisted. In 2010, he spent the entire season suspended from the team for a DUI and other legal troubles.

He returned the following season and was Oregon’s eighth-leading tackler ranked fourth among linebackers with 46 stops, including 6 tackles for loss and 2.5 sacks. He was also named the 2012 Rose Bowl Defensive Player of the Game with one interception and five tackles, including career-highs of 1.5 sacks and 2.5 tackles for loss.

In his final season, he started in all 13 games and earned second team all-conference honors. He recorded 87 total tackles (62 solo, 25 assisted), including 16 tackles for loss, a sack, four interceptions, seven pass deflections and two forced fumbles.

Gabriella “Gaby” Kapp Adams was born on February 13, 1992, in Santa Clara, California; she is one of the children born to Jennifer Kapp (nee. Adams) and Joseph Kapp; she has one older sister, Emiliana, 30, and older brother, William, 28.

Gaby, met and started dating Kiko while they both attended at Los Gatos High School; subsequently, she attended the University of Southern California, before going to UC Berkeley School of Law.

On February 19, 2010 Alonso was arrested and charged with a DUI.It was a controversial situation for the Oregon Ducks football program, as it had gone through a large volume of player misbehaviour off of the field.

Chip Kelly and the program had been criticised greatly by fans for being too lenient on star players for the sake of winning just days prior to Kiko’s arrest. Coach Kelly made the decision to suspend Kiko for the DUI for the entire 2010 season.

In 2011 Kiko was given another chance to be a star on the Ducks football team, but he was arrested again in May 2011 for burglary, criminal trespassing and mischief. The charges stemmed from a burglary attempt on a female victim who reported that Alonso banged on her door and demanded to let him in to her home. The woman called 911, and Alonso smashed down her door and entered her home.

He was also found to be intoxicated from alcohol at the scene. Nothing was reportedly missing from the woman’s house which led to further speculation if this was a serious attempt of robbery or another public intoxication act of Alonso.

He pleaded guilty to the charges and was sentenced to probation, community service, and alcohol abuse counseling. His plea bargain allowed him to avoid going to jail. Despite calls from the local team supporters to kick Kiko off of the team, he was then given a third chance by Kelly, being re-instated to the Ducks football team in early September 2011 after completing over 200 hours of community service and the alcoholic awareness program.

On May 15, 2013, Alonso signed a four-year contract with the Buffalo Bills.

In his first NFL regular season game against the New England Patriots, Alonso had a total of 9 tackles leading the Bills defense close to an upset win. The next week against the Carolina Panthers, Alonso had a total of 10 tackles, 1 interception, and a sack to lead the Bills to their first win of the season under new head coach Doug Marrone. In Week 3, Alonso finished the game with 8 tackles and a pick in a loss to fellow rookie Geno Smith and the New York Jets.

He was the first Bills player to record an interception in back to back games since Jairus Byrd in 2009. In Week 4, Alonso had 5 tackles and 2 interceptions to help his team win against the Baltimore Ravens.

On October 3, 2013, Alonso was named the NFL Defensive Rookie of the Month for the month of September.

In a Week 5 showdown against the Cleveland Browns, Alonso leaped over the goal line on 2nd and goal to prevent running back Willis McGahee from scoring a touchdown. Alonso finished the game with 12 tackles and no interceptions, the first time he did not record an interception in a game since Week 1. In a Week 6 game against the Cincinnati Bengals, Alonso had the biggest game of his young career, when he recorded 22 tackles.

Although Buffalo lost in overtime, Alonso stood out as the only defensive player nominated for PFWA Rookie of the Year. and, on January 14, 2014, was named PFWA Defensive Rookie of the Year. Alonso was also named to the NFL’s All-Under-25 Team for 2014.

Bills GM Doug Whaley announced that Alonso would be shifted to the weakside linebacker position for the 2014–15 NFL season.

Shortly after however, Alonso tore his ACL while working out in Oregon and missed the entire 2014 season, as a seven-to nine-month recovery was expected. Alonso was placed on the reserve/non-football injury list on August 26, 2014.

Kiko Alonso at the Philadelphia Eagles

On March 10, 2015, the Bills traded Alonso to the Philadelphia Eagles in exchange for LeSean McCoy to play for his former college coach Chip Kelly.

During the second quarter of a week 2 contest against the Dallas Cowboys on September 20, 2015, Alonso suffered a Grade II sprain – a partial tear – of his repaired left anterior cruciate ligament (ACL).

Kiko Alonso at the Miami Dolphins

According to Wikipedia, Forbes & Various Online resource, Kiko Alonso’s estimated net worth Under Review. You may check previous years net worth, salary & much more from below.