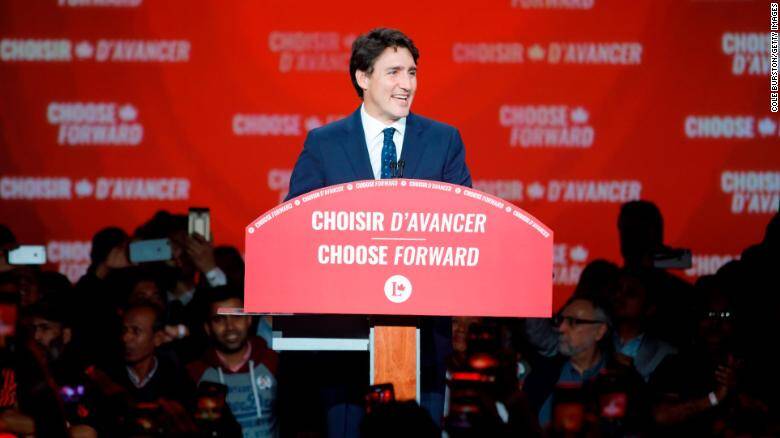 Justin Trudeau has won – and his Liberals party win Canada’s election. The Canadian Prime Minister Justin Trudeau’s Liberal Party has won the 2019 Canadian federal election, according to a projection from the Canadian Broadcasting Company (CBC).

While the Liberals lost seats in parliament, controlling only a plurality of seats rather than an outright majority, they still have enough to keep control of government.

This was an especially bitter campaign in Canada. Trudeau’s government had been rocked by two serious scandals, one involving photos of the prime minister in blackface and brownface, the other involving political interference with a federal prosecution. His campaign went negative — attacking Andrew Scheer, the leader of the opposition Conservative party, as unacceptably conservative on social and economic issues — to scare the generally progressive Canadian electorate into sticking with them.

Apparently, it worked. While Liberal power in Parliament is diminished, it’s still a win for the embattled prime minister. And thanks to the way that Canada’s system works, Canadian policy actually could end up being pushed to the left.

Canadian elections, like American elections, are a first-past-the-post system — meaning the country is divided into different legislative districts, called ridings, and whichever candidate gets the most vote in a riding wins. However, Canada is a parliamentary system, meaning Canadians don’t directly elect their prime minister — control of the executive is determined by which party can win the most support in parliament.

The key fights in the ridings are typically between the two leading center-left and center-right parties, the Liberals and the Conservatives. However, there are several smaller parties that also compete on the national level — the left-wing New Democratic Party (NDP), the Quebec-specific Bloc Québécois (BQ), the environment-focused Greens, and the far-right populist People’s Party of Canada (PPC).

In this kind of system, the division of votes between the different parties really matters. A riding with a progressive majority of voters could end up electing a Conservative to parliament if progressive voters split their votes. This is how the Conservatives have had a decent shot at winning power, even though a majority of Canadians have supported one of the various progressive parties in every election in recent memory.

The big fear among Liberals in this election was that this vote splitting would cost them seats. In the last election, in 2015, Trudeau won as an ethically clean, socially progressive uniter. While Trudeau accomplished a decent amount, including marijuana legalization and a federal carbon tax, many Canadians felt disappointed by Trudeau (pointing to inaction on indigenous issues and his support for oil pipelines).

His image took a particularly large hit from the two scandals: the blackface and brownface images of Trudeau that surfaced during the campaign, and Trudeau’s arguably illegal interference with a federal investigation into a large company based in politically important Quebec.

The result is that Canada’s Golden Boy was not so golden by the time the campaign came around. The prospect of defections to the NDP in particular, whose leader Jagmeet Singh surged in popularity after a strong performance in the debates, loomed large in Liberal strategists’ minds.

So they ran a campaign aimed at scaring Canadian progressives, trying to convince them that a vote for the NDP or the Greens would effectively be a vote for the Conservatives.

Liberal messaging emphasized Conservative leader Scheer’s past opposition to same-sex marriage as well as his personal opposition to abortion (though Scheer said he didn’t want to outlaw it). Liberal messaging also raised the specter of government spending cuts, pointing to the Conservative provincial government in Ontario — Canada’s largest and most politically significant province — which is currently imposing brutal cuts on local services.

It seems like the attacks worked. Trudeau and the Liberals, who had been behind in the national poll averages as recently as five days ago, held on to enough votes to maintain control of government. The Conservatives won more seats, but not enough; the NDP underperformed, while the BQ did extremely well in its home base of Quebec.

It wasn’t an unalloyed victory, however. Liberals lost a number of seats in parliament; how many was not clear as of Monday night, but enough to no longer control an outright majority of seats. Instead, they’ll have to rely on votes from other parties to pass legislation.

This means the Liberals will not be able to simply impose their will through the legislature, as they’ve done for the past four years. Instead, on issues ranging from climate change to the economy, they’ll need to win buy-in from some of the smaller parties — with their most natural allies being the NDP. That should in theory push legislation to the left, as the Liberals will need to make policy concessions to the NDP in exchange for votes.

In Canada, then, parliamentary losses for the Liberal government may end up being a win for progressives.