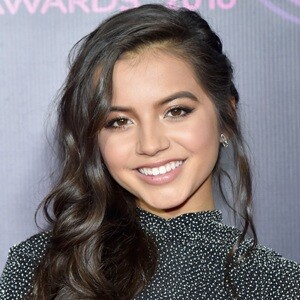 Who is Isabela Moner?

Isabela Moner is an American born teen actress, singer and celebrity. She is best known for her role as CJ Martin on the Nickelodeon series 100 Things to Do Before High School. She has acted in several movies, TV films, and theater shows.

Isabela Moner was born on July 10, 2001, in Cleveland, Ohio, USA. Her nationality is American and she is of Peruvian ethnicity.

Her birth name is Isabela Yolanda Moner. She is the middle child of three children of a French father Patrick Moner and a Peruvian mother Katherine Moner. She has two siblings named Jared Moner and Giovanni Moner.

She was interested in acting and singing since her early age and she wanted to become a professional actress and singer since her childhood age.

Isabela Moner is a 15-year-old American actress. She is in a relationship with Jace Norman. Jace is an American actor. They were not confirming that they were having an affair but recently on their social media handle, Instagram they announced that they were dating.

Isabela was homeschooled from Ohio Virtual Academy. She began going to college at the age of 15.

Moner has been acting since she was 7 years old. She made her Broadway debut at the age of 10 in a production of Evita. Her film debut came in 2013 when she appeared in The House that Jack Built, in which she appeared as Young Nadia. She made her TV acting debut the following year appearing as Jenny in Growing Up Fisher.

Since 20014, Isabela voices the character Kate in Dora and Friends: Into the City! She released her first album titled Stopping Time on September 18, 201. In May 2016, Moner was cast in the upcoming film Transformers: The Last Knight, in which she will be playing Izabella. He is also cast to voice the character of Heather in the 2017 upcoming film The Nut Job 2: Nutty by Nature.

Isabela Moner: Salary and Net Worth

Her salary and net worth have not been disclosed yet.

Rumors were that the young actress Isabela was in a relationship with the young American actor Jace Norman in 2016. Currently, there are no desperate rumors regarding her personal and professional life. It seems she is doing best job without harming others for which she hasn’t been a part of controversy yet. Also, she is so young to be a part of rumors and controversies.