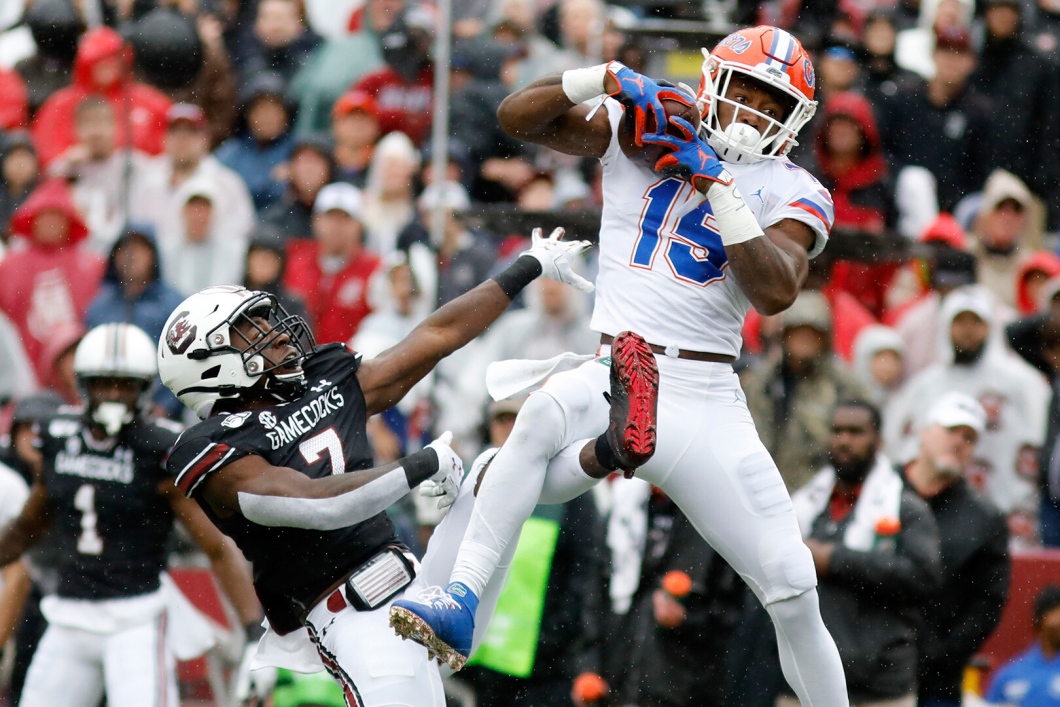 For the 2nd straight week, No. 9 Florida hit the road for an SEC game. And for three quarters on Saturday, South Carolina had the Gators on the ropes. However, a 21-point fourth quarter surge helped Florida win 38-27 and stay in the thick of the SEC East race as it enters a bye week ahead of its annual showdown with No. 10 Georgia.

In the soaking rain, Florida quarterback Kyle Trask threw for a career-high four touchdown passes as the Gators staved off a noble upset bid by the Will Muschamp’s Gamecocks. For a Florida team that’s still hoping to make its way to Atlanta for the SEC Championship Game, this was a survive-and-advance type of week.

So what did we learn from Saturday’s game? Here are four takeaways from the Gators’ win.

1. Dan Mullen is getting the most out of Kyle Trask: No, Florida’s 2019 campaign did not end with the season-ending injury to Feleipe Franks. In fact, you could argue the Gators are doing every bit as well, if not better, with Trask under center.

No, Trask does not have some of the same physical attributes that Franks possesses, but he’s been solid this season, and Mullen leaned on his arm again against South Carolina. Trask went 20-of-33 passing for 200 yards with a career-high four TDs in the game.

And while he did have one pick on a poor throw inside his own 20, he also extended a bunch of drives with his smart feet and otherwise-accurate arm. His touchdown to Freedie Swain in the fourth quarter for Florida’s first lead of the day was a thing of beauty (as was the catch).

Mullen really trusts Trask to move the chains, even if the big plays aren’t always there. Other than Dameon Pierce’s 75-yard touchdown run and a couple nice carries by Lamichal Perine late, there wasn’t much room for the ground game, so Mullen had to ride with Trask’s arm. It worked.

2. The Gators missed their two best defensive linemen and got even more banged up: Defensive ends Jon Greenard and Jabari Zuniga were unable to play due to ankle injuries. and those absences nearly ended up being deciding factors in this game as they were key reasons Florida suffered against LSU last week.

UF sacked Gamecocks QB Ryan Hilinski three times with backups Jeremiah Moon and Zach Carter each getting a sack, but it was also evident Florida dearly missed Greenard and Zuniga, who rank first and second, respectively, in sacks on the team.

Hilinski wasn’t super effective, averaging only 4.9 yards per attempt, but he was also nursing a knee injury of his own. Still, South Carolina outgained Florida 387 yards to 354 yards in large part due to a lack of push up front by the Gators.

The availability of Greenard and Zuniga for the Georgia game will be something to watch as will the statuses of linebacker James Houston IV, DL Adam Shuler and DL Marlon Dunlap Jr. — three defensive front seven players that were also injured in the game for Florida. (The Gators also saw wide receiver Trevon Grimes go down with a left knee injury following on an onside kick recovery.)

3. South Carolina is right to be upset about the officiating: I don’t normally knock officiating as a reason why a team wins or loses a game. It’s a harder job than you realize and everyone’s trying their best. And to be clear, South Carolina did not lose because of the zebras. There were too many other factors.

However, you can you can point to two, maybe three, critical missed calls on two Florida touchdowns. On Pierce’s touchdown in the third quarter, officials missed a blatant false start by the right tackle along and did not call a possible holding penalty.

Then, Kyle Pitts’ 5-yard touchdown catch in the fourth quarter to go up 31-20 was a clear case of offensive pass interference via pick play. Muschamp was so fired up that he received an unsportsmanlike conduct flag towards the end of the game. Officiating in general was weak on both sides as the Gators had numerous complaints about missed calls early in the game.

And even if the proper flags were called on Florida late, it doesn’t mean they wouldn’t have scored later. But they were uncalled penalties on scoring plays all the same, which stand out more than the others. Muschamp was livid, and he had a right to be.

4. The SEC East is more wide-open than anticipated: Things would have been even crazier if South Carolina went 2-0 against Florida and Georgia, but this division still has a lot of uncertainty to it. Missouri was the only undefeated team in the SEC East (in conference play) before a shocking upset at Vanderbilt.

Over the next month, the Tigers, Gators and Bulldogs all play one another. All three have either shown to be vulnerable to conference opponents, or in Missouri’s case, yet to be thoroughly tested. This is low-key becoming one of the more intriguing divisional races as the season progresses. Florida and Missouri are very much in this.