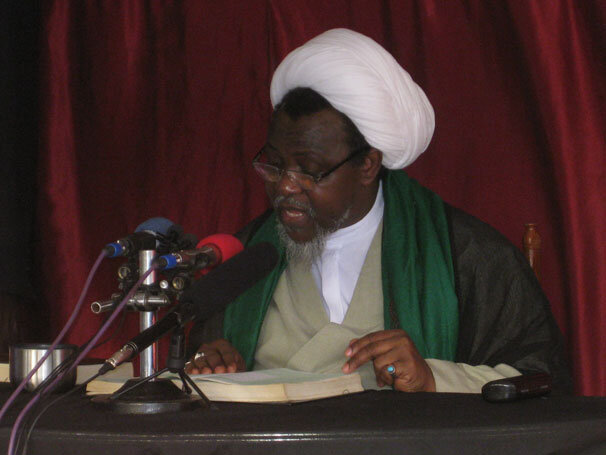 Who is El Zakzaky?

Ibrahim Yaqoub El Zakzaky (also known as the radical Ibraheem Zakzaky; Ibrahim Al-Zakzaky) (born May 5, 1953) is an outspoken and prominent Shi’a Muslim cleric in Nigeria.
He is the head of Nigeria’s Islamic Movement, a movement that he founded in the late 1970s, when he was a student at Ahmadu Bello University, and began propagating Shia Islam around 1979, at the time of the Iranian revolution—which saw Iran’s monarchy overthrown and replaced with an Islamic republic under Ayatollah Khomeini.
[spacer height=”20px”]
El Zakzaky believed that the establishment of a republic along similar religious lines in Nigeria would be feasible.
He has been detained several times due to accusations of civil disobedience or recalcitrance under military regimes in Nigeria during the 1980s and 1990s, and is still viewed with suspicion or as a threat by Nigerian authorities.
[spacer height=”20px”]
In December 2015, the Nigerian Army raided his residence in Zaria, seriously injured him, and killed hundreds of his followers; since then, he has remained under state detention in the nation’s capital pending his release, which was ordered in late 2016.
[spacer height=”20px”]

Ibraheem Zakzaky was born on 5 May 1953 (15 Sha’ban 1372 AH), in Zaria, Kaduna State. He attended the Provincial Arabic School, Zaria (1969-1970), the School for Arabic Studies, Kano from 1971-1976, where he obtained the ‘Grade II’ Certificate, and the Ahmadu Bello University (ABU), Zaria (1976-1979), where he earned a first-class bachelor’s degree in Economics.
[spacer height=”20px”]
The degree was denied to him by the university authorities due to his Islamic activities.
During his university days, he was active in student Islamic unionism, where he became the secretary-general of the Muslim Students Society of Nigeria (MSSN) at the Main Campus of the university (1977/78), and later became Vice President (International Affairs) of the National Body of the MSSN in 1979.
[spacer height=”20px”]
Sheikh Zakzaky giving a lecture at ABU’s mosque in the 1990s.
The same year, he is said to have become so impressed with the 1979 Iranian Revolution that he wanted one at home. Later, Zakzaky went to Iran, ultimately becoming a Shia cleric.
[spacer height=”20px”]
At home, he became the leader of the Islamic Movement in Nigeria and turned it into a vehicle for proselytizing and gaining followers in the 1990s. As a result of his activities, millions have converted to Shia Islam in a country once with hardly any Shia population.
[spacer height=”20px”]

Ibraheem Zakzaky is the primary figure and spiritual leader of the Islamic Movement in Nigeria (formerly: Muslim Brothers[, Africa’s most prominent Shi’a Muslim movement. Of Nigeria’s 180 million population, around 50 percent are Muslim, a small minority of which belong to Shi’a Islam.
[spacer height=”20px”]
According to Nnamdi Obasi, Senior Analyst on Nigeria at the International Crisis Group (ICG), the IMN’s goals are twofold: “to ensure more stringent application of Islamic legal and administrative systems…then ultimately to create an Islamic state in Nigeria.” Dr Iqbal Siddiqui described El-Zakzaky as “the de facto leader of the Islamic Movement in Nigeria”.
[spacer height=”20px”]

The Resource Forum of the Islamic Movement of Nigeria (IMN) held a symposium on “The Creation of the Illegal State of Israel” at Arewa House Kaduna on May 21, 2008. Zakzaky said,
when Israel is celebrating sixty years of occupying Palestine’s land, we are mourning because the truth is Israeli State is created on the basis of terrorism and what is not yours is not yours, no matter years of oppression and hostage it would slip someday along with those supporting them. Israel will fall with her allies certainly.

What are the El Zakzaky Nigeria’s Islamic Movement ties to Iran?

[spacer height=”20px”]
Iran, which is known for defending Shiite causes worldwide, has responded firmly to the conflict between the Shiite group and Nigerian soldiers. Iranian president Hassan Rouhani reportedly called his Nigerian counterpart Muhammadu Buhari to urge that a fact-finding mission be set up to investigate the recent violence.

Iran also reportedly summoned the head of the Nigerian diplomatic mission in Tehran to protest against the clashes and ask that Shiite Muslims be protected. Zakzaky has previously denied that the IMN receives funding from Iran, but it appears that the movement has a powerful ally in any future disputes.

On Friday 25 July 2014, the Nigerian Army reportedly fatally shot 35 followers of Ibrahim Zakzaky, including three of his sons, after a pro-Palestinian procession in Zaria. The UK Islamic Human Rights Commission published the report Zaria Massacres and the Role of the Military in October 2014.

[spacer height=”10px”]
Sheikh al-Zakzaky was injured and arrested along with his wife, in the 2015 Zaria massacre, in which three of his remaining sons, as well as hundreds of his followers, were killed by the Nigerian Army.

[spacer height=”10px”]
Detainment and ordered release
[spacer height=”10px”]
According to the judgment of the high court of Nigeria on 2 December 2016, Ibrahim Yaqoub El Zakzaky was ordered to be released from Department of State Services (similar to the US FBI) detention into police custody within 45 days. El Zakzaky and his wife were to be paid the sum of 50 million Naira ($164,052) in compensation.
The judge announced that the justification of “holding him for his own protection” is not sufficient. On January 13, 2018, Zakzaky, detained at an unknown location without charges since December 2015, made a short public appearance, his first in two years, being allowed to see his doctor.
IMN 2019 clashes
On January 22nd, 2019, Zakzaky and his wife, Zeenat head to the Kaduna High Court for hearing on the bail application. They were guarded by heavily armed operatives as they made their way into the court.
On July 2019, in order to demand the release of Ibraheem el-Zakzaky, hundreds of people gathered outside government buildings and policemen tried to disperse them by using gunshots and tear gas. During the clash, two people died and 40 protesters were arrested by police.
The Islamic Movement of Nigeria (IMN), a group of Nigeria’s minority Shia Muslims, said protests will continue until they secure the release of el-Zakzaky, because he suffered another stroke on Monday and it is needed urgently for him to be flown abroad for medical treatment.[spacer height=”20px”]
As Abdullahi Murtala, a security analyst said, “Shia Muslims are emboldened by the perceived injustice of an ‘immoral state’ and will continue their protest and show of defiance against the Buhari government”.
Another clash with Nigerian police on 22 July claimed many lives both of the Shi’tes, police officers and a young reporter, Precious Owolabi under NYSC. A Deputy Commissioner of Police also lost his life during the clash.
President Muhammadu Buhari-led government proscribed the sect as illegal movement in Nigeria after meeting with service chiefs over the clash.
[spacer height=”20px”]

Nigerians have called on the federal government to release the leader of the Islamic Movement of Nigeria, Sheikh Ibrahim El Zakzaky, so as to put a stop to the sum of N3.5 million allegedly being used to feed him monthly.

This call came in reaction to a video, showing Minister of Information and Culture, Lai Mohammed, alleging that the Federal Government spends N3.5 million on feeding El Zakzaky every month.

The video which was shared on Wednesday has been trending on Twitter, with Twitter users sharing their opinion about the claim of the minister.

Lai Mohammed says they spend N3.5M to feed El Zakzaky. If you are not going to release him as court ordered because he is a threat to Security why feed him with N3.5M monthly when there are citizens who are no threat to security that are dying of Hunger?

Eight Things You Need To About The Shi’ite Leader:  El Zakzaky

1. Zakzaky attended traditional Quranic and Islamic schools in the town of Zaria under the tutelage of scholars such as Malam Isa Madaka and Malam Ibrahim Kakaki. He attended the Provincial Arabic School, Zaria (1969-1970), Law School (now the School for Arabic Studies), Kano (1971-1975) and the Ahmadu Bello University (ABU), Zaria (1976-1979).
[spacer height=”20px”]

3. He became the secretary-general of the Muslim Students Society of Nigeria (MSSN) in the Main Campus of ABU (1977/78) and later Vice President (International Affairs) of the National Body of the MSSN in 1979. His activity in the society saw the conception of the Islamic Movement in Nigeria which came as an independent body since early 1980s.

4. The movement has established many schools known as Fudiyyah or Fodia schools named after Shiekh Usman dan Fodio a famous 18th-century scholar and jihadist. The movement also publish newspapers and magazines in both English and Hausa languages.

5. He was described by Dr Iqbal Siddiqui as “the de facto leader of the Islamic Movement in Nigeria”.

6. Zakzaky was jailed several times on charges of sedition by successive Nigerian regimes in the 1980s and 1990s.

7. In September 2009, Zakzaky’s supporters clashed with police in Zaria, leading to injuries and deaths on both sides. The IMN accuses the government of intimidation and attempting to wipe it out.

8. On Friday 25 July 2014, Nigerian Army reportedly gunned down 35 followers of Ibrahim Zakzaky including his 3 undergraduate biological sons after pro-Palestinian procession in Zaria. The brutal murder drew world attention and world wide sympathizers which led the Nigerian Government to set up committee to investigate the action.