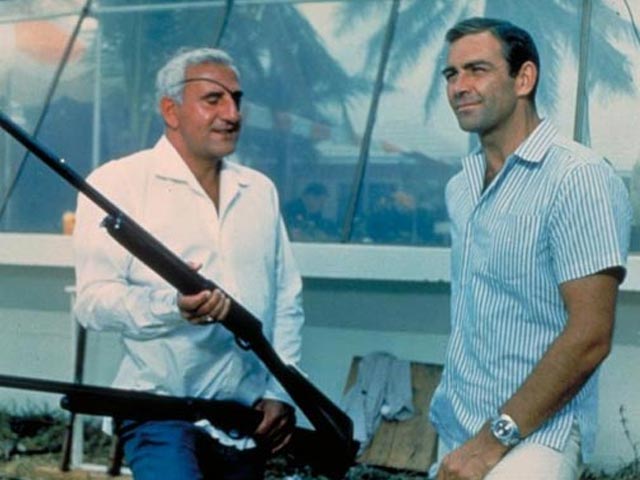 LONDON  – British composer John Barry, who won five Oscars and is best known for creating music for the James Bond movies, has died. He was 77.
“It is with great sadness that the family of composer John Barry announce his passing on January 30, 2011 in New York,” his family said in a statement released by Bond production company EON Productions.
“Mr. Barry is survived by his wife Laurie of 33 years and his four children and five grandchildren.”
A private funeral will be held, with a memorial service to follow in Britain later in the year.
No cause of death was given but the BBC reported he died of a heart attack.
Fellow composers paid tribute to Barry’s influence.
“I think James Bond would have been far less cool without John Barry holding his hand,” fellow Bond composer David Arnold told BBC Radio.
According to online biographies, Barry trained as a classical pianist but turned his attention to jazz and learned to play the trumpet.
In the late 1950s, he became leader of the John Barry Seven, which hired Vic Flick as lead guitarist. It was Flick who performed the famous James Bond guitar riff, which accompanies the opening credits of the movies.
He began arranging music for singers on a television series, including Adam Faith, and composed the score for “Beat Girl,” in which Faith appeared, in 1960.
Barry’s work brought him to the attention of producers of “Dr. No,” who were dissatisfied with the score they had been given and so called in Barry to help.
The result was to become one of the signature tunes of movie music history, and Barry went on to become one of the most celebrated film composers of his generation. As well as five Oscars, he won four Grammy awards.
Barry’s Bond compositions included “Goldfinger,” “From Russia With Love” and “You Only Live Twice,” and his Academy Awards included best music for “Dances With Wolves,” “Out of Africa” and “Born Free.”