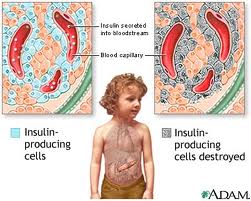 A study by researchers of the United States has found that rate of Type 1 diabetes has increased sharply among children of Philadelphia. The study claims to make a startling fact that children under 5 years of age in the region are being affected with the deadly disease. Such cases are on the rise for over a period of last two decades in Philadelphia.

The study has formally established growth of such cases in Philadelphia, to match with those of Europe and the United States. An alarming factor related to this report is that the diabetic disease mentioned here points to be the deadly one. It requires insulin as a means of cure. It is reported that nearly 70 per cent increase of such cases is found after registry of patients began, from 1986 to 2005. It was also reported that there was an increase of 29 percent of diagnosed cases of diabetes among children within 14-years of age.
A professor from the Pennsylvania School of Nursing, Terri Lipman, mentioned that the real cause behind such a rapid rise in cases of Type 1 diabetes among the young generation is still not clear. The professor is also a lead author of the research team, studying increased type 1 diabetic cases.
Researches have shown that diabetes under Type 1, affects children in majority of cases; while that of Type 2 targets the adults. However, Type 2 diabetes is affected in the patients whose bodies are able to produce insulin, but is unable to use it for regulating blood sugar content.
Researches have also proven that patients affected with Type 1 diabetes has to take insulin on a regular basis. On the other hand, patients suffering for Type 2 diabetes can control sugar level in their blood through medication, exercise and diet.
According to a specialist from Mount Sinai Hospital at New York, Carol Levy, the reason behind increase in Type 1 diabetes among children is still a mystery. The specialist even urged the parents to take care of the kids and ensure that they maintain a healthy lifestyle and normal weight of body. However, he was not part of the research team that carried out the tests.
Several theories have gradually emerged depicting causes of increased cases of diabetes among children. However, according to reports from Reuters, Lipman has argued that these have not yet been scientifically proved. Lack of breast-feeding during infant age, deficiency of vitamin D and even overtly hygienic environment might lead the immune system to defunct.
Lori Laffel, associated with Joslin Diabetes Center at Boston, mentioned that it is very important to understand diabetic symptoms that include accidents pertaining to children trained for toilet, bed-wetting, excessive wetting of diapers by babies and even unconditioned thirst.
Laffel even went on to mention that sick infants or toddlers are often prone to wet their diapers, which goes unnoticed by parents. Therefore, parents need to be more careful in detecting such incidents since babies are unable to speak out their problems. Early detection of the disease would help in undertaking effective treatment measures; otherwise, the disease is prone to become life threatening if left unattended.