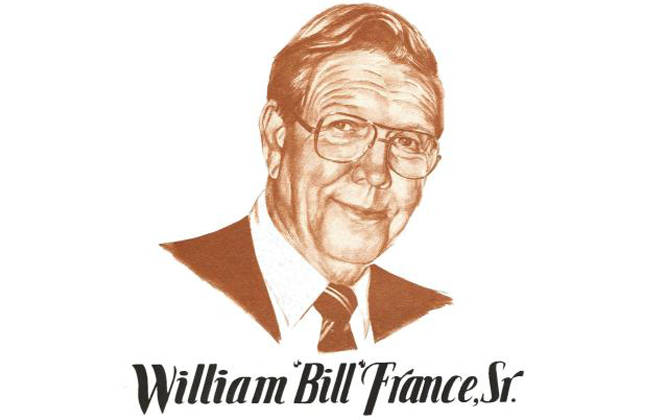 Who is Bill France, Jr.?

William Clifton “Bill” France (April 4, 1933 – June 4, 2007), nicknamed, “Bill France Jr.” or “Little Billy”, was an American motorsports executive who served from 1972 to 2000 as the chief executive officer (CEO) of NASCAR, the sanctioning body of the US-based stock car racing. He succeeded his father, NASCAR founder Bill France Sr. as its CEO. His son, Brian France, has been CEO since 2003.

Bill France was born in Washington, D.C., to Anne Bledsoe and William Henry Getty France. His family moved to Daytona Beach, Florida in 1935 to escape the Great Depression. He attended Seabreeze High School before attending the University of Florida. He served for two years in the United States Navy before turning to a career in racing.

France grew up helping at race tracks; he sold concessions and helped park cars at the Daytona Beach Road Course. He worked twelve hours per day, seven days a week for thirteen months with the construction of Daytona International Speedway, where he drove a compactor, bulldozer, and grader. He once tried using a mule to pull trees out of the swamp because motorized equipment was getting stuck.

He rode off-road motorcycles, and began competing in enduros in the 1960s. France entered the Baja 1000 in the motorcycle division in the early 1970s.

He gave the up-and-coming sport of motocross a chance at Daytona in the early 1970s.

The motocross races started with little fanfare, but grew into the popular Daytona Supercross, part of Daytona Beach Bike Week, which began in the late 1930s.

After serving as vice-president for six years, he became the head of NASCAR when his father Bill France Sr. retired on January 10, 1972.  The International Motorsports Hall of Fame describes the transition: “Other than the founding of NASCAR itself, Bill Jr.’s appointment to leadership is probably the most significant event in the history of the sanctioning body.”  NASCAR went from a Southern regional sport to a national sport during his tenure.

France turned the presidency of NASCAR over to Mike Helton in 2000 after being diagnosed with cancer. He made his son Brian France the CEO and chairman of NASCAR in 2003. Bill France Jr. remained a member of the six-person NASCAR board of directors.

The France family continues to own NASCAR outright, and has a controlling interest in race track operator International Speedway Corporation. France Jr. continued as chairman of the board of ISC, until his death. His daughter Lesa France Kennedy is ISC’s president.

France died of lung cancer in Daytona Beach, Florida, on June 4, 2007 at about 1:00 pm. His death occurred during the rain-delayed Autism Speaks 400 Cup race, and his death was reported during the live broadcast of the race at lap 261. NASCAR on Fox lead announcer Mike Joy held a moment of “silence” during a restart around lap 270, and the track’s flag was lowered to half staff.