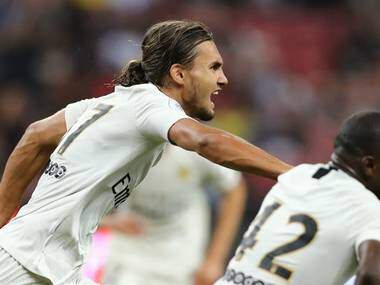 Diego Simeone and his players thought that they had secured at least a penalty shootout when an own goal from Antoine Bernede wrong-footed goalkeeper Kevin Trapp to level things up for the Spaniards four minutes from time. However, PSG substitute Virgiliu Postolachi had other ideas and thumped home a spectacular late winner in the final minute of added on time in Singapore.

PSG had taken the lead after 32 minutes through Christopher Nkunku’s opportunist finish and despite 10 half-time substitutions, Thomas Tuchel’s men went on to double their lead through a slick Moussa Diaby strike after he was teed up by Timothy Weah.

Victor Mollejo dragged Atletico back into the contest four minutes later with a scrappy effort and the comeback then looked complete when Bernede turned the ball past Trapp and into his own net with just four minutes of normal time left.

Just when it looked like penalties would be needed at National Stadium, Jean-Christophe Bahebeck set up Postolachi for his match-winning goal in a game that saw three PSG youth academy products score at the right end.

Les Parisiens rode their luck at times and Atletico striker Kevin Gameiro, in particular, should have done better with a first half chance, but the French champions’ second half was impressive from such a young and inexperienced side and Diaby hit the crossbar with what would have been a wonder goal.

Not everything was perfect for Tuchel, though, as the manager was forced into substituting two of his half-time substitutes when Alec Georgen and Loic Mbe Soh limped off inside the first 15 minutes of the second half.

PSG’s three points move then off of the foot of the ICC accumulated table, while Atletico still have Inter Milan to come before their duties are over.