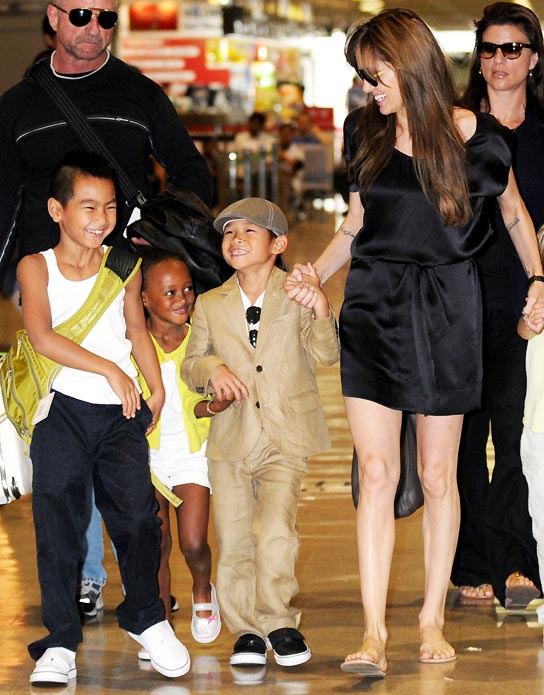 Angelina Jolie, partner to Brad Pitt, is the star of several blockbuster movies. Among them Girl Interrupted and Mr. and Mrs. Smith, coincidentally where she met Pitt. But perhaps her most well known portrayal was as the buxom Lara Croft, in the Tomb Raider films. During the shooting of the first movie, much of which was shot on location in Cambodia, Jolie came to witness the beautiful environment, immersive culture, and rampant poverty of the nation. This, she says, opened her eyes and was her stepping stone into humantiarian work. After Cambodia, Anglina Jolie took a trip to Sierra Leone and Tanzania in 2001, and it was there that she first became actively involved in humanitarium causes. The purpose of that fateful trip was to discover first hand the conditions that refugees must suffer. Angelina was so shocked that shortly after, in August 2001, she was appointed Goodwill Ambassador for the United Nations High Commissioner for Refugees, otherwise known as UNHCR. The UNHCR assists over 20 million refugees in 120 countries around the world. They were created to protect and safeguard the well-being and rights of refugees. They believe that refugees have a right to seek asylum in another country and will actively seek to engage nations to integrate and support those refugees. Thus far, in only 5 decades, they have helped over 50 million people in the world. Angelina’s contribution has greatly assisted in generating more widespread attention to this worthy cause. As a goodwill ambassador, her role is to communicate to, and provide a focus on refugees by generating mass-media attention. Though in Jolie’s case this is not merely superficial. She actually spends much of her own time and is genuinely affected by their misery. On her trip to Ecuador, Jolie wrote of the suffering, “People’s lives are truly in danger – not just in the sense that you feel your town is unsafe – their lives are actually being threatened and their houses are being burnt down.” To further increase public awareness, Jolie has released several personal journals of her experiences during field visits. More information can be found at unhcr.org. As well as the physical effort that Jolie contributes, her foundation with partner Brad Pitt, called the Jolie-Pitt Foundation recently donated USD$1 million to groups working in Darfur. Darfur is a region in war ravaged Sudan, which Jolie has visited three times already. Jolie now plans to spend most of her time in humanitarian efforts, revealing that she splits her actress her salary three ways; a third for savings, a third for living expenses and a third for charity. Considering she commands a high pay packet for movies, as well as product endorsements, that equates to a considerable amount donated. Jolie has two adopted children, and is currently thinking of a third. Maddox, a cambodian refugee boy she adopted in 2002, and Zahara, an ethiopian refugee girl. She also has a child with Brad Pitt, named Shiloh. Together with Pitt, Jolie has stated that she will continue to promote and actively engage in humanitarian causes, as well as pursuing her acting ambitions.