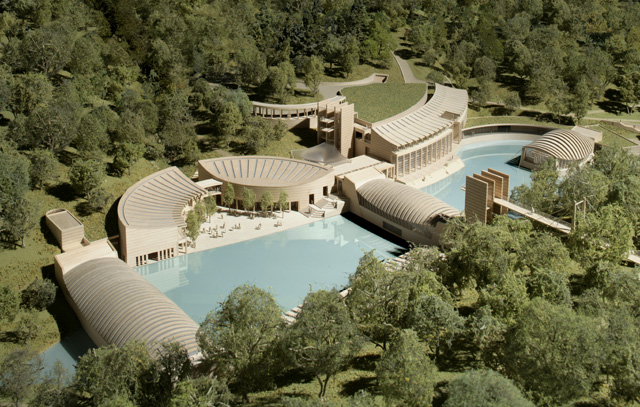 Some critics might say Jasper Cropseys The Backwoods of America, part of the Crystal Bridges growing American Art Collection, is a symbolic icon for billionaire Alice Waltons passion for the arts.
Designed by world renowned architect Moshe Safdie, and funded by billionaire Alice Walton, the 50 million dollars that is just the cost of the facility and does not include the artworks Crystal Bridges Museum of American Art is scheduled to open in 2009, in Bentonville, Arkansas. It was two years ago this month that the daughter of Sam Walton, Founder of Wal-Mart, made the controversial announcement.
The museum will house a permanent collection of signature works from American artists along with galleries dedicated to regional art and artists including Native American art, but oddly enough, this monumental task is not making everyone happy.
The depth of the museum is indicated in a purchase from Christies Americas auction house in New York City in 2004 of Charles Wilson Peales portrait of George Washington for $6.1 million. This is causing some critics to puff up, believing that the art works are being snatched from their own backyard. No need to worry, collaborating with other institutions will be an important focus of Crystal Bridges, even before the museum opens, and they can also rest easy to know Bentonville does have an airport.
A number of the works from the Crystal Bridges permanent collection are already on loan at various museums throughout the United States including: The Hudson River School masterwork Kindred Spirits which was loaned to The National Gallery in Washington, D.C. for public viewing from 2005 – 2007. It is currently on loan to the Brooklyn Museums exhibition by the same name featuring the works of Asher B. Durand. The same exhibition will also travel to Washington D.C. and San Diego.
Thomas Eakins Portrait of Professor Benjamin H. Rand is currently on loan to the Philadelphia Museum of Art. Jasper Cropseys majestic depiction of early American frontier life, The Backwoods of America, is now featured in the American galleries of The Nelson-Atkins in Kansas City, and the most extensive surviving group of Colonial American portraiture, the Levy-Franks family paintings, is currently on loan at The Jewish Museum in New York City. Also, the distinctive painting George Washington (The Constable-Hamilton Portrait) by the American painter Gilbert Stuart is currently on view at the Museum of Fine Arts Houston.
While the puffers puff, others admire Waltons passion and dedication to the arts, and recognize the fact Crystal Bridges will be the premier American Art Collection, once it is in place. The collection is headed up by Bob Workman, formerly associated with the Amon Carter Museum in Fort Worth, Texas.
When completed, the museum complex will encompass approximately 100,000 square feet of gallery, library, meeting, and office space, a 250-seat indoor auditorium, areas for outdoor concerts and public events, gallery rooms suitable for large receptions, as well as sculpture gardens and walking trails. Walton is building this American Dream on 100 pristine, wooded acres her family owns in Bentonville.