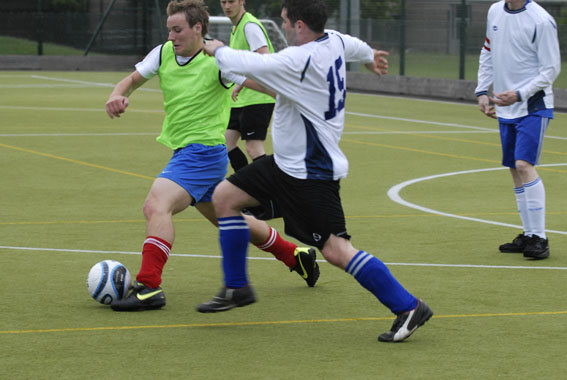 There will always be those who swear by the standard version of ‘the beautiful game’ and to a large extent won’t give the notion of five-a-side a second thought. They’re convinced not only that 11-a-side football is far more enjoyable, but also that five-a-side is something of a low-calorie version of the full-fat game – an easier alternative for amateurs, if you like.

In reality however, this only ever tends to be the kind of opinion voiced by those who have never actually given five-a-side a go – as in real five-a-side that’s played as it should be. According to the experts at www.5-aside.org, to call the reality of proper five-a-side a shock to the system for most would be a glaring understatement as when those of an unsuspecting nature first try it out, most cannot believe how misguided their prior perceptions really were.

And when it comes to the benefits of five-a-side over and above the real thing, there are certain plus points that simply cannot be disputed, not matter which side of the fence you may be on.

For example, getting a minimum of 22 people together at the same time for a game of standard football is a pretty epic ask to say the least. In fact, it’s rare for most football fans to ever get themselves involved in these kinds of full-size games as it’s simply implausible that all the players they need will all be available at the right time. By contrast, when you play five-a-side football you need only 10 people in total – much easier to come up with at any time. It goes the same for those looking to play at amateur levels as those looking to put higher-level teams together to coach – five-a-side teams are vastly easier to build than regular-sized football teams.

It’s also worth bearing in mind that the compact nature of a five-a-side game means that infinitely less space is needed to set up and play a game. You’d be hard-pressed to bag yourself the kind of space needed for a full-sized game in your local park…unless of course you paid for a booking…but when it comes to five-a-side, even the smallest open space will do. What’s more, there’s much to be said for the classic ‘jumpers for goalposts’ way of doing things, which in the case of five-a-side football means there’s almost no expense involved and no time required to get things up and running. Just plonk down a few sweaters or cones and away you go!

If you’re the kind that prefers to get stuck into the action rather than waiting half the game for the ball to come anywhere near you, five-a-side football is definitely the game for you. As a general rule of thumb, the ball should be passed no more than once or twice before an attempt on goal is made and every player across the pitch should be moving at all times. It’s the kind of action that’s restricted to maybe nine or ten instances in the average 90-minute football game – with five-a-side it’s the kind of action that’s constant from start to finish. So in terms of excitement both for those taking part and those watching from the sidelines, it’s a unique experience to say the least.

For those with an interest in getting into shape, any type of football is of course fantastic as a form of exercise. However, due to the uniquely explosive nature of the action that takes place with five-a-side football, this more compact version of full-sixed football is in fact known to be even better for health. You move around more, you make more intensive movements and you’re forced to focus constantly in a way that’s far more demanding than any standard football game. So in terms of health benefits and getting in shape, five-a-side is superior – as scientific research has proven.

Last but not least, five-a-side has the potential to be a much more social experience than standard football for the simple reason that it’s so much easier to assemble and retain a team populated solely by good friends. In an 11-man football team there will inherently be those you don’t get along with and others that just don’t seem to be interested in the social side of things. Not the end of the world you might argue, but at the same time there’s nothing more enjoyable than a five-a-side that’s just as tight off the pitch as on it.