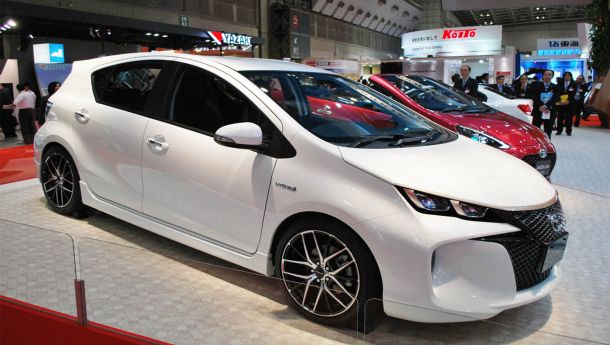 The Toyota Prius hybrid was for the family man, the perfect car. Light on fuel yet jam packed with features.

It had the durability and Quality that Toyota is known for. Buying a new Prius, you can forget about expensive maintenance and workshop trips for a long long time. It was the perfect combination for Pakistan. People were shocked to see a car deliver such excellent fuel economy (always north of 20km/l) in city driving. It became an instant hit after the first few were imported and Prius imports surged sharply. Sharp enough for Toyota Indus to take notice, and so it was officially launched in 2013.

On the other hand, it often was the butt of the “environment jokes”, even referred to as a ‘UPS’ by some gearheads.  Initially, it did have a reputation of being owned by tree huggers and hence the jokes. But with every new generation, the Prius has been getting better and better.

The Toyota Prius 2016 hybrid was unveiled at Las Vegas in September. The new car is dramatically different from its predecessors. There have been great improvements in an attempt to elevate the Prius to a higher category.

The 2016 Prius is built on Toyota new global Architecture. The new design has a lower center of gravity and resulting in improved handling.  The new car not only drives better, but it also looks very sharp and delivers improved fuel economy. A ten percent improvement over its predecessor, under the right conditions it can deliver up to 55 miles per gallon, which translates to roughly 40 km/l.

By the clever use of different types of steel and hard work on optimizing the shape, Toyota engineers have achieved a great milestone. The Toyota Prius 2015 hybrid has improved torsional rigidity more than 60 percent. This means that the new Prius will have lower noise levels, even when the car is being driven on a rough road, and it will also handle better.

The simple logic is that, greater the torsional rigidity, greater the force is required to twist the body. So a more rigid chassis will have less flex, and so cabin noise will be reduced.

A more rigid body has other less obvious advantages. It will last much longer before it starts flexing too much and giving the “old car” feels. It will also fare better in collisions.

The new 2016 Prius hybrid is designed to change the perception that a Prius is just another econobox. The focus is not entirely on making it cheap to run.

Couple this suspension setup with a lower center of gravity, and the Prius sounds like an exciting combination.

The 2016 Prius hybrid sports a 1.8 liter VVTi engine, with an immensely high thermal efficiency figure of 40 percent. This figure normally fluctuates between 25 and 30 percent on most other cars that are being produced today.

It achieves these figures by employing an ingenious Exhaust gas recirculation (EGR) system and by some precise tuning.

The engine is designed in a manner, such that friction is minimized. Tolerances are tight and low viscosity engine oil is used.

The hybrid system components have also been improved. The new system weighs less and takes up less space.

The new Prius has a slightly redesigned interior. The main difference between the 2016 Toyota Prius and the 2012 Toyota Prius car is that the center consoles of the newer model is redesigned. But it still feels somewhat awkward. The AC vents are also changed, now they are longer and less taller and include a glossy white bezel.