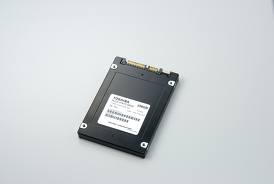 Every now and again there is a leap in technology that really changes the game. Often this can be something that has been around for a while, but a combination of market forces and manufacturing techniques come together to suddenly bring it to mass attention.

This is pretty much the case with solid state drives (SSDs), which are the big new development in storage mediums. But what exactly do they offer that the old style hard drive doesn’t?
The Basics
A solid state drive represents as big a revolution in the way we use electronic devices as the changeover did from valves to transistors in the 1950s.
Up to now the hard drive in your laptop, desktop, iPod or a whole range of other devices has worked on the principle of spinning metal platters which are physically touched by a
little needle-like head, in the same way that old vinyl record players work.
Wherever there are moving parts there is wear and tear and the potential for physical damage is genuine, as anyone who has lost data by jarring an active hard drive will know only too well.
Solid State
SSDs have no moving components at all. They work in a very similar way to USB storage sticks that we are all familiar with, only at much faster read and write rates.
In fact, speed is the primary advantage of an SSD over a traditional HDD, making boot times faster, allowing applications to launch quicker and file/data copying/duplication speeds a great deal snappier.
Noise
Another big advantage of SSDs is that they make for far quieter machines. Because there are no moving parts they are silent in operation themselves, and also they don’t require any fans or cooling systems, so the overall effect is to reduce noisy activity a great deal.
Cost
The main problem regarding the uptake of SSDs to this point has been the fact that they have carried a high price tag. As with most innovations, early adopters are stung for being the first in the queue, but as the technology develops the general prices drop and more people are able to reap the benefits.
Right now traditional hard drives still offer better value in terms of price per gigabyte of storage, but it is performance issues that really put SSDs out in front. Having said that, it is a certainty that in the very near future prices will fall to the point where data storage capacities won’t be an issue.