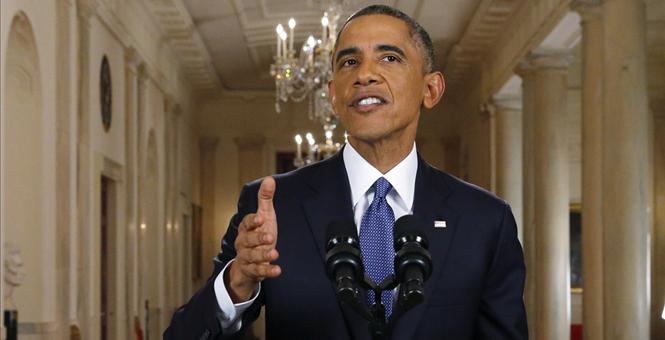 Keeping his promise and breaking his own words that were spoken many times by him in the past, President Obama took the stand on Thursday night and addressed the nation. He signed paperwork that says millions of illegal immigrants will not be deported. Easing citizenship and making the dreams of an American life more possible for about 5 million illegal and unskilled immigrants.

Just like the ACA, according to many detractors and Americans who want to abide by the law, this new ruling will be defeated in the courts slowly or quickly. This will mean the President will have nothing to show for his legacy accept defeats because he went too far and ignored the constitution in this new immigration law and the ACA. As anyone can see, the ACA is slowly being eroded and still is unpopular with voters. No different than the ACA, this new immigration plan is also unpopular with the public.

Speaking from the White House the President chose to focus on why he had taken to pass an executive reform on the issue instead of going with the majority and abiding to the constitution which is what he swore to protect when he took the oath. The Republicans argue that Obama has rewarded bad behavior and what he did was illegal because crossing into America unlawfully is illegal and so on. They also say that his idea of reform is akin to providing amnesty to a multitude of illegal immigrants in the US who still barely know English.

But in fact, the President took a dig at the current immigration system which he has ignored for six years and now all of a sudden takes serious since it allows millions to live in the country without paying taxes. But this does not matter since they were not receiving the same treatment as citizens who did follow the law and wait their turn in line. America needs skilled immigrants, not unskilled immigrants who cannot read well and are coming here now just to receive free benefits.

The Republicans, and most Americans, could not be any less happy about the turn of events because they see their kids’ classrooms being inundated with kids who cannot speak English and who slow down the rest of the class. Just last year the President had announced that he did not have the authority to act on the immigration issue all on his own. Apparently he changed his mind when Republicans made huge gains in the midterms and he saw the writing on the wall. It read “you are now a lame duck President and you should begin to work with Republicans.”

But Obama did not listen to the writing on the wall and proved that he and the Democrats depend on a permanent lower class for votes. But the President just alienated millions of American blacks in the process and many other Americans looking for a step in the door.

Immigration attorneys say that Obama’s executive reform will take the threat of immediate deportation away from some 4.7 million immigrants who are parents of US citizens. The new law will allow them to remain in the country temporarily. But being given a safe stay is not equal to being an actual citizen says immigration lawyers in Washington. For instance, these immigrants will not have access to healthcare and insurance under Obamacare. They will however be eligible to work.

The high tech firms were hoping Obama would legalized skilled employees and students to remain in America. But he did not. Obama continues to ignore common sense initiatives (lowering taxes, Keystone pipeline, regulations that destroy small businesses) that if he passed  would increase his stature in the country that put him in office. It is obvious he cannot overcome his own ideology for the betterment of minorities and all Americans across the not so fruited plane.