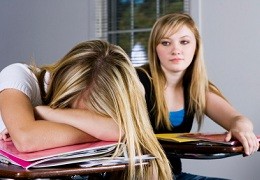 Have a teenager who suffers from mood swings, has poor concentration, and perhaps even has discipline problems in school? While it’s easy to chalk it up to just being a teenager, there is research that suggests that these symptoms, as well as several others, may be the results of your teen simply not getting enough sleep each night. The more you know about how important your teen’s snoozing pattern is, the more effective you may be at getting back the child you once knew!
The Problem
According to the American Psychological Association, most teens are only getting around 7.5 hours per sleep each night by the time they are 16 years old. During their earlier years they were getting around 10 hours per night. What’s more, research shows that 26 percent of teens are getting less than 6.5 hours of sleep each night. The problem with this is that it’s recommended that teenagers get at least 9 hours of sleep per night. Unfortunately, the research indicates that around 90 percent of the teens in the country are not meeting that requirement.
Finding a Solution
Whether it’s the fast paced full-to-the-brim lifestyles that we live today or the fact that many teens are staying up late for social reasons, one thing is for sure – they are not getting the sleep they need. Here are a few tips to help get teens back to bed so that they are getting their 9 hours of sleep each night:

Helping teenagers to get more sleep each night will not only put them in a better mood, but it’s also likely to help them get better grades. They will be less likely to have difficulty staying awake in the classroom, will be able to concentrate better, and will be ready to take on the day!
Kelly Austin is an author who contributes to technology and parenting blogs to help parents with modern-day problems. Kelly recognizes problems and suggests answers for today’s parents in this fast-paced world. Follow Kelly on Twitter @KellyAustin86