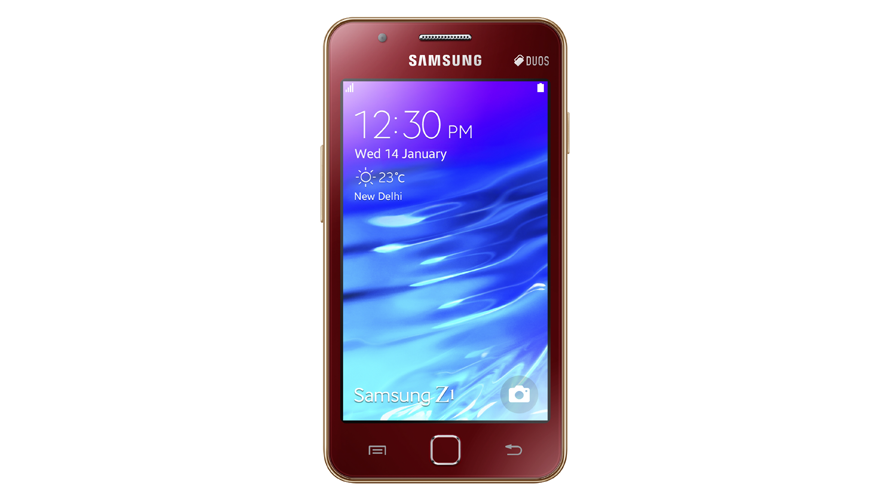 The Samsung Z1 is the second experiment of the firm with its revamped software platform, Tizen. Unlike the Samsung Z, the new model has been launched initially in emerging markets as its technical profile fitting a model input range. And that is in the specification can find a four-inch WVGA screen, Dual Core processor, 768 MB of RAM and a 1,500 mAh battery. In most of the countries this model is not yet available as just two weeks ago it was launched. Let’s hope it would be available very soon.

The design of Samsung Z1 model bears a striking resemblance to the basic range representing the Samsung Galaxy. Plastic housing with curved and covered entirely with a plastic band that emulates a metallic look profile. Device measurements are as 120.4 mm long by 63.2 mm wide and 9.7 millimeters thick. The weight of 112 grams is registered.

Under the heading of features and specifications of Samsung Z1 highlights the liquid crystal display LCD PLS four inches. It is a capacitive multi-touch panel with a resolution of 800 by 480 pixels per inch. As for the main camera, arranged in the back of the computer, features a 3.1 megapixel sensor with VGA video recording capabilities. Beside find an LED flash for taking snapshots in dark environments with less difficulty. We also found a second camera on the front of the phone. In this case the resolution of it is VGA, 640 x 480 pixels.

The set with Tizen 2.3 is powered by incorporating a Dual Core processor. It has an ARM Cortex A7 architecture that operates at a maximum frequency of 1.2 GHz. Comes with a GPU and 768 MB ARM Mali400 to move the operating system. As the storage system is concerned, the Samsung Z1 keeps inside a chip flash memory of 4 GB memories, which is complemented by a slot for microSD cards up to 64 GB.

Connectivity is resolved with support for 2G and 3G networks as well as WiFi N and Bluetooth 4.1. In turn the phone includes assisted with support for GLONASS satellite network GPS chip. In terms of battery life, the set features a removable lithium-ion battery with a capacity of 1,500 mAh. According to the manufacturer this stack provides a time to use up to eight hours talk time, 30 hours audio playback, seven video playback and 10 hours web browsing via WiFi (seven hours with 3G) connection.

It is a mid range device and it seems Samsung wants to grow slow its Tizen OS powered devices, may be it would take 2 to 3 years to see a powerful device like Samsung Galaxy Note 4 in the Samsung Z series. Or if Samsung has other plans then we would see the Samsung Galaxy Note 5 Tizen versions too, but it is a rumour we can’t believe it fully at the moment.