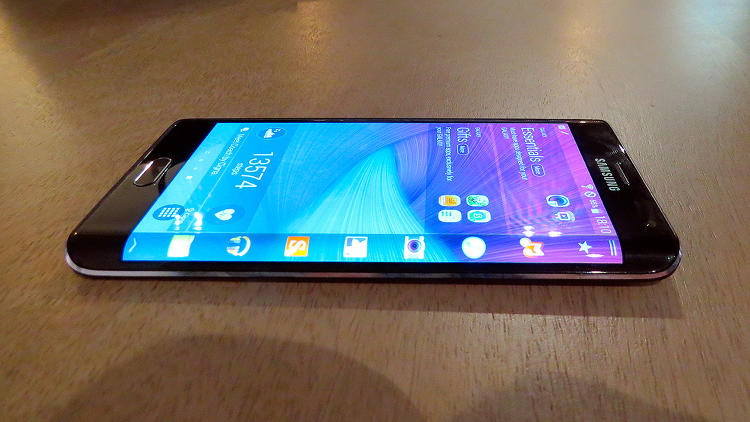 Samsung finally revealed its most awaiting and unique device that is Samsung Galaxy Note Edge. And the new device from Samsung has a unique display and has a curve on the right. This interesting change in this phone is making it controversial. Checkout the Samsung Galaxy S7 Review aswell.

The display is itself very good but ghosting objects reflected in the screen of Galaxy Note Edge is very weak, it shows that between the layers of the screen there is an air gap. Due to the smaller number of boundaries (such as glass-to-air) with very different refractive indices of the air gap without screens look better in high ambient light, but their repair in case cracked outer glass is much more expensive, as is necessary to change the entire screen. On the outer surface of the screen Galaxy Note Edge have a special oleophobic (grease repellent) coating (very effective, is noticeably better than Nexus 7) so that fingerprints are removed considerably easier, and appear at a slower rate than in the case of conventional glass.

In the derivation of the white box at the top of the screen and manual brightness control its maximum value was 330 cd / m² minimum – 1.7 cd / m². You also need to take into account the fact that in this case, the smaller the area of ​​white on the screen, so it is lighter, that is, the actual maximum brightness of the white areas will almost always be higher than the specified value. For example, while displaying a white screen at half the maximum brightness in manual adjustments increased to 360 cd / m². As a result, the readability of the day in the sun is at a sufficiently high level (check the opportunity never arrived). Powered automatic brightness control for a light sensor (located to the right of the front speaker slots). In the work of this function, you can make adjustments by moving the slider settings from -5 to +5 units. Next to the three conditions give the values ​​of the brightness of the screen for three values ​​of the setting – to -5, 0 and 5. In complete darkness automatic brightness is reduced to 3.4, 8.7 and 18 cd / m² respectively (the first – a bit dark, and the rest – well), under artificial light illuminated office (approximately 400 lux), the brightness is set to 67, 145 and 270 cd / m² (a bit dark – at the time – lightish, which corresponds to a predetermined correction), in a bright environment (appropriate lighting clear day outside, but without direct sunlight – 20,000 lux, or a little more) – rises to 330 cd / m² regardless of the position of the slider. This value is the maximum for manual adjustment. In general, the result of the automatic brightness adjustment as expected. Note that even with manual brightness adjustment is extremely smart smartphone forcibly lowers the brightness when it is too high for the given conditions.

This was all about the Galaxy Note Edge display overview and it is revolutionary phone from Samsung and we hope to see something better with the launch of Galaxy S7.