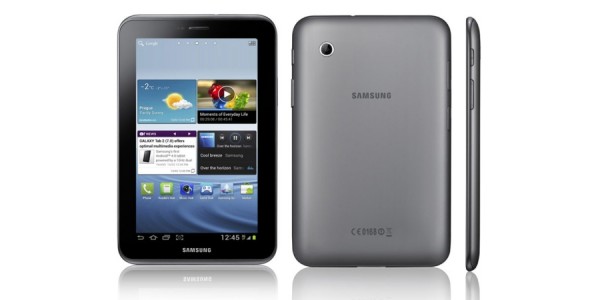 Samsung Galaxy Tab 2 is on its way and it is official: this is going to be the first native Android v4.0 (Ice Cream Sandwich) tablet and the expectation is definitely quite high. Though the device is a successor of the Galaxy Tab – in terms of style, it is comparable to the smartphone variant, Samsung Galaxy S. Let’s see exactly why you should look forward to this gadget:

The time gap between the original Galaxy Tab and the latest version of the tablet is almost 18 months. Though the specs are not drastically different, the chassis has gone through a huge makeover. You will notice that the manufacturer has opted for a rounded silver back (original Galaxy Tab had white back) and thick slab. A nice 7.0 inches display screen makes the device bigger and its measurements are 193.7 x 122.4 x 10.5 mm, weighing in at 344 grams.

Now, you know that the display size of the device is 7.0inches, but here is a detailed disclosure of it: With the resolution of 600×1024 pixels, the 7.0 inches screen has roughly a 170 ppi pixel density. 16million colors provide crystal clear visibility and the PLS LCD capacitive touchscreen makes the handling smooth. TouchWiz UX UI enables the multitouch facility for the device.

You will not get high-end camera features like those in some snap-centric, but yet the offerings are decent. It comes with two cameras, one at the rear and the other at front. The rear one is a 3.15 mega pixel snapper with 2048×1536 pixels resolution along with smile detection and geo tagging features. It can record videos at [email protected] The frontal camera is plain VGA, and meant to be used for simple video chat.

The device will run the latest platform of Android OS, which is Ice Cream Sandwich. Therefore, the speed and the power are expected to match with the best in the business. Dual core 1 GHz processor powers the device and you may not find the speed as mind blowing… however, when flick from different apps or through the menus, you will not get any lag whatsoever, which is definitely impressive. In terms of storage, the device is definitely quite powerful. It will be available in three versions of storage capacity, which are 8 GB, 16 GB and 32 GB. Apart from the internal memory, there is a card slot for microSD to expand the memory up to 64 GB.

The AllShare service of Samsung is perked up at Galaxy Tab 2 and now it enables the users to work anywhere. Previously, it was like being in the same house without much of an opportunity to work anywhere. However, you now get much increased versatility, as long as the service is linked with the device. This article was brought to you by the Computer Too Slow website, where besides getting lots of free advice – including tips on how to deal with the blue screen – you can also find news on the coolest available gadgets.