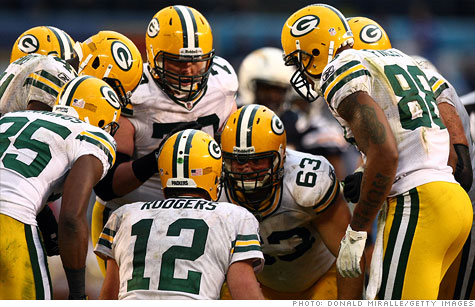 According to Aaron Rodgers, Sunday’s matchup between the Green Bay Packers and the New England Patriots is not him versus Tom Brady. But unless the players meet again during the Super Bowl — which could happen — this might be the only meeting between two of football’s top quarterbacks playing as starters.

The Packers and the Patriots have played only twice since Rodgers joined the Packers as first-round draft pick back in 2005, but Rodgers only played backup duty during the 2006 game while he missed the meeting in 2010 due to an injury.

Since Rodgers is an NFC quarterback his chances to play against players like Peyton Manning and Tom Brady tend to be few and far between. He’s only played against Manning once, back in 2008

Rodgers isn’t concerned, telling listeners of his ESPN Milwaukee radio show on Tuesday that he doesn’t feel he has “a void” in his career for not having gone up against those players more often. Of course he has tons of respect for them and their career, but he never looks at these games like it’s just one quarterback playing the other. Every play takes 11 players to be effective, and the Packers have played some great teams in their conference. Brady and Manning have simply spent their careers playing the AFC and that’s simply how things have gone.

Of course Rodgers likes to think that he will still get some chances by the end of his career to go up against quarterbacks in his conference who fans like in the same way they like Manning and Brady, so fans can make a comparison there. But Rodgers doesn’t feel he’d have a void because he hasn’t played those guys — in fact, he’d rather not, since they’re great players.

Brady and Rodgers have actually been much closer off the field than they’ve ever gotten on it. Rodgers and Brady became friends a few years ago and the two often hang out in the offseason. They’ve even taken a trip to the Kentucky Derby together.

Rodgers told his fans that “Tom loves talking ball,” so whenver they get together they always find it fun to talk football, see what Brady’s been thinking about, discuss his season, and maybe put a film on and watch some games.

Sunday’s game between the Packers and the Patriots represents a matchup between the AFC’s top team — the 9-2 Patriots — versus the number 2 team in the NFC, the 8-3 Packers. Both teams managed to pull past struggles early in the season, and the Patriots won seven games straight. The Packers have won seven of their last eight, after Rodgers made his famous comment after their 1-2 start about “R-E-L-A-X.” (To see the game, click here for Green Bay Packers tickets.)

As Rodgers put it, these records are sort of what hapens in the NFC, where teams go through a few rough points and it ends up showing the teams’ character. Obviously the Patriots have lots of character in their locker room and the team is guys who stick together, which is the most important thing when a team faces adversity. The Packers had to go through the same, according to Rodgers, and they stuck together and managed to get on a roll winning seven of eight. Sunday’s match is therefore a “great matchup” with a “couple of hot teams” facing each other.