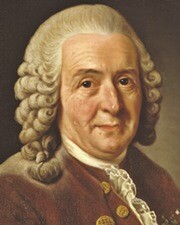 The Most Famous Swedish People in History

Despite a population of less than 10 million, Sweden has produced many famous people. It is worth noting that despite a small population, Sweden is among the top 10 countries in terms of the total number of Olympic medals (including summer and winter games).

This gives Sweden one of the highest (4.) medal to population ratios in the world.

Here are the list of the Most Famous Swedish People in History:

Gustav II Adolf (1594 – 1632) King of Sweden, who helped to establish Sweden as a European great power during the Thirty Years’ War. Gustav was a pioneering military leader and also an experienced administrator. He reformed Swedish society and created a strong system of government and administration. His success helped to strengthen the influence of Protestantism in Europe. He died in the battle in 1632.

Emanuel Swedenborg (1688 – 1772) Born in Stockholm, Swedenborg was a well-known mining engineer, innovator, scientist, philosopher and Christian mystic. He wrote an influential volume on life after death, heaven and hell (1758). He advocated a version of Christianity in which works are as important as faith.

Alfred Nobel (1833 – 1896) Swedish chemist, engineer, innovator and armament manufacturer. Nobel invented dynamite and held 350 other patents. He left a legacy to finance prizes for key sciences, in particular the Nobel Peace Prize – one of the most prestigious awards in the world.

Tage Erlander (1901 – 1985) He served as Sweden’s longest-serving Prime Minister from (1946-69). Erlander was a moderate who built social welfare and prosperity, and maintained Sweden’s absolute neutrality and remained free of nuclear weapons.

Dag Hammarskjöld (1905–1961), Second Secretary-General of the United Nations from 1953 to 1961, Hammarskjold played a key role in the development of the embryonic United Nations during the difficult years of the Cold War in the 1950s.

Raoul Wallenberg (1912 – 1945) Swedish architect, businessman and diplomat. While Wallenberg served as special envoy to Hungary during World War II, he saved tens of thousands of Jews from persecution by offering them Swedish citizenship and protection in Swedish buildings. He was taken by Soviet agents in January 1945 and died in Soviet custody.

Ingvar Kamprad (1926 – ) Kamprad is the founder of the furniture chain IKEA. It has made him one of the richest homemade business people in the world. Based on a philosophy of simplicity, frugality and enthusiasm for the product.

Olof Palme (1927 – 1986) Dual Prime Minister of the Social Democratic Party – from 1969-76 and 1982-86, Palme was a key figure in Swedish politics. He also committed Sweden to a policy of non-alignment with the major blocs (USA / Soviet). He also supported the liberation movements of the Third World. Murdered on the streets in 1986.

Greta Garbo (1905–1990) actress. Known as one of the greatest female actresses. Garbo was a star in both Silent Movies and in early Talkies. She was awarded an honorary academy prize in 1954.

Ingmar Bergman (1918 – 2007) Swedish film director who has been very influential in creating a new strand of films that deal with questions of faith, death and gender. Famous films include The Virgin Spring (1960), Through a Glass Darkly (1961), Fanny and Alexander (1983) and The Magician (Ansiktet) (1960).

Jan-Ove Waldner (1965 – ) (Sweden, table tennis). Waldner has been at the pinnacle of his career in table tennis for over two decades. From 1983 to 2001 he has won a medal at all world championships. 1992 Olympic champion.

Magdalena “Magda” Forsberg (1967 – ) Forsberg was the dominant-biathlete during her career of 1997 to 2002. She was World Champion six consecutive times

Annika Sörenstam (1970 – ) (Sweden, golf) She is the top most successful golfer in the country. Sorenstam has won 72 official LPGA titles.

Zlatan Ibrahimović (1971- ) Swedish attacker who has played for Ajax, Juventus, Inter Milan, Barcelona, AC Milan, Paris St. Germain and the Swedish national team. For Sweden he has scored 51 goals from 100 games. He is also well known for his bitter charismatic personality.