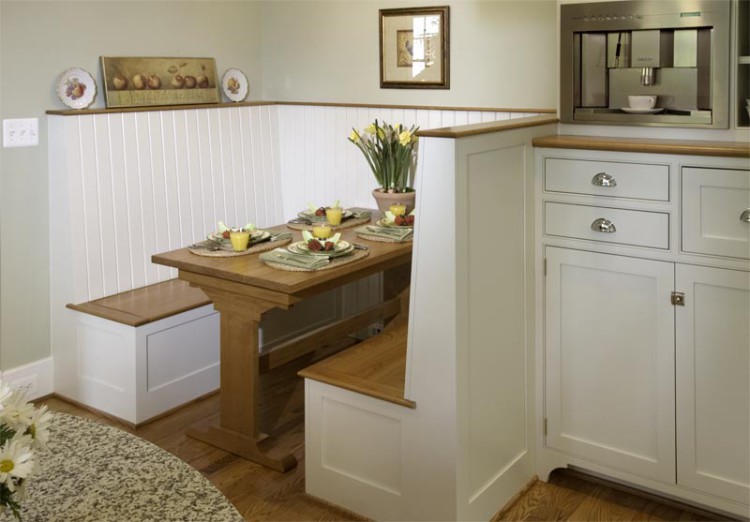 Your basic home has everything you need, from a kitchen to bedrooms to bathrooms to a room to entertain guests in to storage… yes, that’s everything you could ever really need, but life isn’t just about needs, it is also about wants. We all want a unique, interesting home that reflects our interests, tastes, aesthetic, and lifestyle.

That explains why so many people today are choosing to build a breakfast nook right in their own home; inspired by the quaint, comfortable, cozy feeling that you can get at a nice restaurant, at a bed-and-breakfast, or occasionally in film, today’s homeowners see a breakfast nook as a great addition, a place to get away and enjoy a book, a coffee, and a meal away from the hustle and bustle of the rest of the house.

Not everyone has a massive home in which to build such structures willy-nilly, however. Fortunately, breakfast nooks are actually quite small in size, and you can easily work within your home’s dimensions to create a breakfast nook for yourself and your family. There are a variety of approaches, including…

If you have room for a small table and a bench on either side of it, then you have room for a booth. The walls that create the privacy a nook needs can easily be added around the booth, giving it that “breakfast at an inn” feeling that has inspired so many breakfast nooks before.

Rather than surrounding the nook with walls, however, you can instead use a banquette back to block off the nook from the rest of the room without taking up excessive space. If you want a nook that is a bit more open while still maintaining some degree of privacy, this may be the best way to do it for you!

Bays have been a popular element of home design for some time now, but they often go woefully underused, often ending up having a table and lamp shoved into the because the owner has little idea of what to do with a bay once they have one. Fortunately, a bay is perfect for a nook! You can easily measure out a table and chairs that will fit in the space. Plus, this leads to an especially light-filled nook – great for waking up in the morning and really enjoying the new day dawning.

On the other hand, there are plenty of corners that also go unused in a home. It can seem as though we just put stuff in a corner just to fill the space, as it is not being used for anything else. Why not take one of those corners and instead put a nook of your own there? It’s off to the side, giving it a degree of privacy, while also being comfortably situated in an actual living space. Plus, you’re making use of a corner that was previously going to waste!

5. Build Off an Island

Islands in the kitchen are all the rage, but sometimes they go to little use, and part of the space they open up is often under-used. You can use an island as a banquette framing a nook; little did you know that most of your nook was waiting for you in your kitchen already!

+Ken Uhrich likes to sit down with his coffee and paper in his breakfast nook every morning. He regularly blogs and gives home improvement tips on the Custom Home Group website.