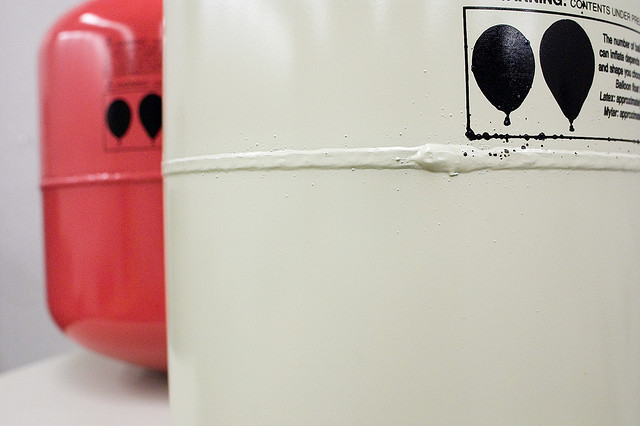 Helium is not a substance to be found in a regular domestic fridge, but its use in super-cool applications is vital.

Refrigeration systems work on the principle of transferring heat energy from a cold temperature reservoir to a hotter one. The domestic or commercial fridge cools its contents by the compression, expansion and condensation of a gas, called a refrigerant, which circulates in a closed loop attached to the exterior of the fridge frame.

The loop connects a compressor, condenser, vent fins, expansion device and evaporator. The whole process requires an energy input to power the various stages. The refrigerant temperature rises when it is compressed, and its temperature falls when it is transferred into a condenser. Cooling fins attached to the rear of the fridge cabinet release heat that is emitted by the cooling process. The now liquid refrigerant passes to an expansion device, where its pressure falls suddenly and changes its state into a vapour. This produces a cooling effect that is transferred into the fridge via the evaporator.

As the refrigerant continues through the loop, it absorbs heat from inside the fridge cabinet to the outside, becoming a low-pressure gas in the process. It continues to the compressor, where the process starts all over again.

Older fridges were cooled by gases that were compounds of carbon and halogens such as fluorine and chlorine, or CFCs. These were found to deplete the Earth’s ozone layer and have been mostly replaced by tetrafluoethanes, or HFCs.

Anyone hoping to cool something in an appliance such as those found at fridge freezer direct  is ensured of a temperature of – 18 degrees Celsius, while the temperature within the body of fridges or chest coolers will be around 4 degrees C.

However, these temperatures are insufficiently low for use in cryogenics or super-cold applications that require temperatures around absolute zero. This is defined as 0 degrees Kelvin (K) or -273.15 degrees C. Such temperatures are need in semi-conductor processing, magnetic resonance imagery (MRI) scans used in medical and research purposes and much academic and commercial research. This is where helium finds its role.

Helium is an inert gas – an element that is the second lightest in the Periodic Table and remains liquid at temperatures below – 271.15 degrees C, or 2 degrees K.  It is colourless, non-toxic and non-flammable. Without it, it would be impossible for any device to reach absolute zero.

MRI systems work on the basis of superconductivity – the ability of a material to exhibit no electrical resistance when cooled to a sufficiently low temperature. The expansion in use of MRI scanners as diagnostic tools is due to widely available and reasonably priced helium.

As it is both chemically and radiologically inert, helium can be used without any special safety precautions. Most helium that is used for cryogenics is extracted from natural gas. The use of helium as a super-refrigerant effectively displaced hydrogen – the lightest element – from that role. Hydrogen can only cool down to a temperature of 9 degrees K, or -264.15 degrees C.