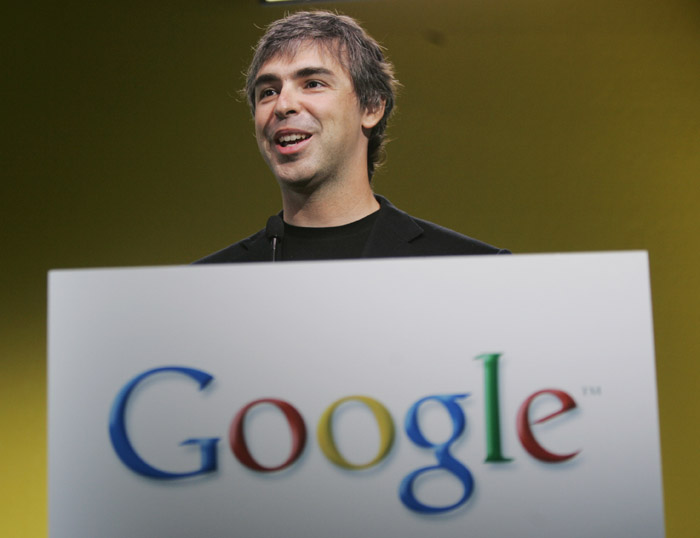 SAN FRANCISCO  – Google Inc co-founder Larry Page will take over as CEO from Eric Schmidt, a surprise move to make the company more nimble at a time when competition heats up with fast-growing rivals like Facebook.
Page’s assumption of day-to-day operations marks a return to Google’s technological roots, 13 years after he and fellow Stanford University student Sergey Brin founded what has become the world’s No. 1 Internet search engine with $29 billion a year in revenue.
“Day-to-day adult supervision no longer needed!” Schmidt tweeted after the announcement.
The news came as Google reported earnings and revenue that blew past expectations.
While Google has dominated Internet search for a decade, the company has struggled to find its footing in social networking, with a new crop of Web companies such as Facebook and Twitter stealing Web traffic and engineering talent.
“As spending was curbed and order restored over the last few years, some of that Google magic was lost,” said Tricia Salinero, managing director of Newforth Partners, a mergers and acquisitions advisory firm, in an email.
Schmidt, who will step aside on April 4 and make way for Page, told Reuters in an interview that the change was “not a reaction to competitors.”
Rather, he said, it was an effort to speed up decision making at the company, which ended the year with about 24,000 employees.
“Google has many different businesses and the issue that we have been getting into is there’s too many ways (in) which these businesses can be slowed down,” Schmidt said.
Schmidt, who became CEO in 2001 to bring more management experience to a then-fledgling company, will assume the role of executive chairman, focusing on deals and government outreach, among other things. Brin will concentrate on strategic projects.
Shares in the Internet search and advertising leader rose about 2 percent to $639 in extended trading.
Just days ago, Apple Inc CEO Steve Jobs announced a leave of absence, leaving lieutenant Tim Cook in charge of day-to-day operations. Like Google, Apple also announced results this week that blew past Wall Street’s estimates.
“The Street will think it’s a negative, that there is probably some issue going on. Google is trying to get more efficient and trying to get a tech guy in the seat to compete with Facebook,” said UBS analyst Brian Pitz. “I don’t think it changes anything strategically where the company is headed.”
News of the change came as Google reported a 29 percent surge in both net profit and net revenue that beat forecasts.
Net income, excluding items, of $8.75 a share outstripped Wall Street’s average forecast of $8.10.
Net revenue, excluding fees paid to partner websites, was $6.37 billion. Analysts polled by Thomson Reuters I/B/E/S, on average, were expecting net revenue of $6.06 billion.
GOVERNMENT OUTREACH
The world’s top Internet company is recruiting and going on an acquisitions spree, aiming to ensure its online products remain popular as surfers turn to new services like Facebook — now the most heavily trafficked website — and wireless gadgets.
On a conference call with analysts, Google CFO Patrick Pichette said a 10 percent, across-the-board pay raise instituted late last year was a direct attempt to staunch a flow of talent to hot Web upstarts in the Valley.
Google is also facing increasing regulatory scrutiny as its influence on the Web grows and as the company expands into other markets.
The company’s planned $700 million acquisition of airline ticketing software company ITA software is being reviewed by U.S. regulators, while European regulators are looking into Google’s search practices.
Google tried to buy fast-growing online local-shopping service Groupon for $6 billion but was rebuffed, Chicago Breaking Business, a Tribune Newspaper website, and other news outlets reported.
The question is whether Facebook’s success could start to cut into Google’s business, as investors debate whether marketers will advertise on both online services, or shift advertising dollars from Google to the world’s largest social network.
Google said the management change was made as part of a plan to “streamline” decision making and create clearer lines of responsibility and accountability at the top.
“It’s a good move. It (the triumvirate management structure) was always one of things that concerned us a little bit,” said Ryan Jacob, portfolio manager with the Jacob Internet Fund. “It should streamline the decision-making process. They’re in a fast-moving industry.”
Schmidt now plans to sell about 534,000 shares of Class A common stock, the company said. Based on Google’s closing share price of $626.77 on Thursday, he would earn about $334.7 million on the stock sale. He would still own about 2.7 percent of Google’s outstanding capital stock, down from 2.9 percent before selling the shares.
“As Google has grown, managing the business has become more complicated. So Larry, Sergey and I have been talking for a long time about how best to simplify our management structure and speed up decision making,” Schmidt said in a posting on the company’s official blog.
“And over the holidays we decided now was the right moment to make some changes to the way we are structured.”
Google also reported fourth-quarter financial results, beating Wall Street’s net revenue expectations.
Schmidt said on his blogpost that Page, the son of a Michigan State University computer science professor, will now lead product development and technology strategy, areas that are “his greatest strengths.”
“It will be interesting to see what he’ll do that’s different, what he could not have done in his prior role,” said BGC Partners analyst Colin Gillis.